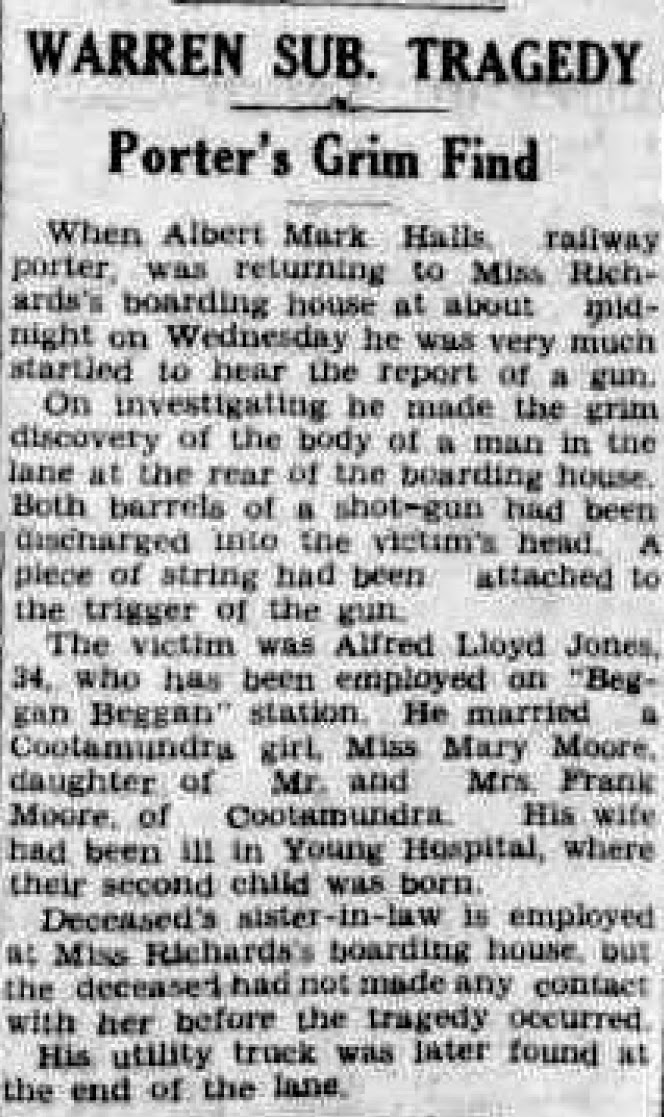 
When Albert Mark Halls railway porter was returning to Miss Richard's boarding house at about midnight on Wednesday he was very much startled to hear the report of a gun.
On investigating he made the grim discovery of the body of a man in the lane at the rear of the boarding house.  Both barrels of a shot-gun had been discharged into the victims head.  A piece of string had been attached to the trigger of the gun.
The victim was Alfred Lloyd Jones, 34, who had been employed on "Beggan Beggan" station.  He married a Cootamundra girl, Miss Mary Moore, daughter of Mr. and Mrs. Frank Moore, of Cootamundra.  His wife had been ill in Young Hospital, where their second child was born.
Deceased's sister-in-law is employed at Miss Richard's boarding house but the deceased had not made any contact with her before the tragedy occurred.
His utility truck was later found at the end of the lane. 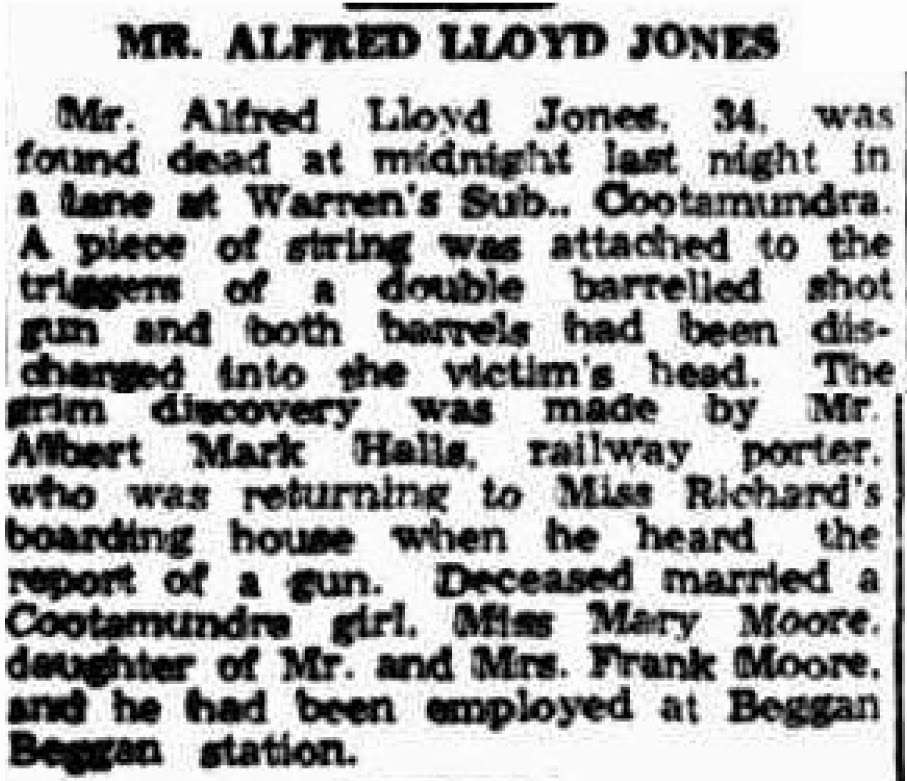 Mr. Alfred Lloyd Jones, 34, was found dead at midnight last night in a lane at Warren's Sub., Cootamundra.  A piece of string was attached to the triggers of a double barrelled shot gun and both barrels had been discharged into the victim's head.  The grim discovery was made by Mr. Albert Mark Halls, railway porter, who was returning to Miss Richard's boarding house when he heard the report of a gun.  Deceased married a Cootamundra girl, Miss Mary Moore, daughter of Mr. and Mrs. Frank Moore, and he had been employed at Beggan Beggan Station. 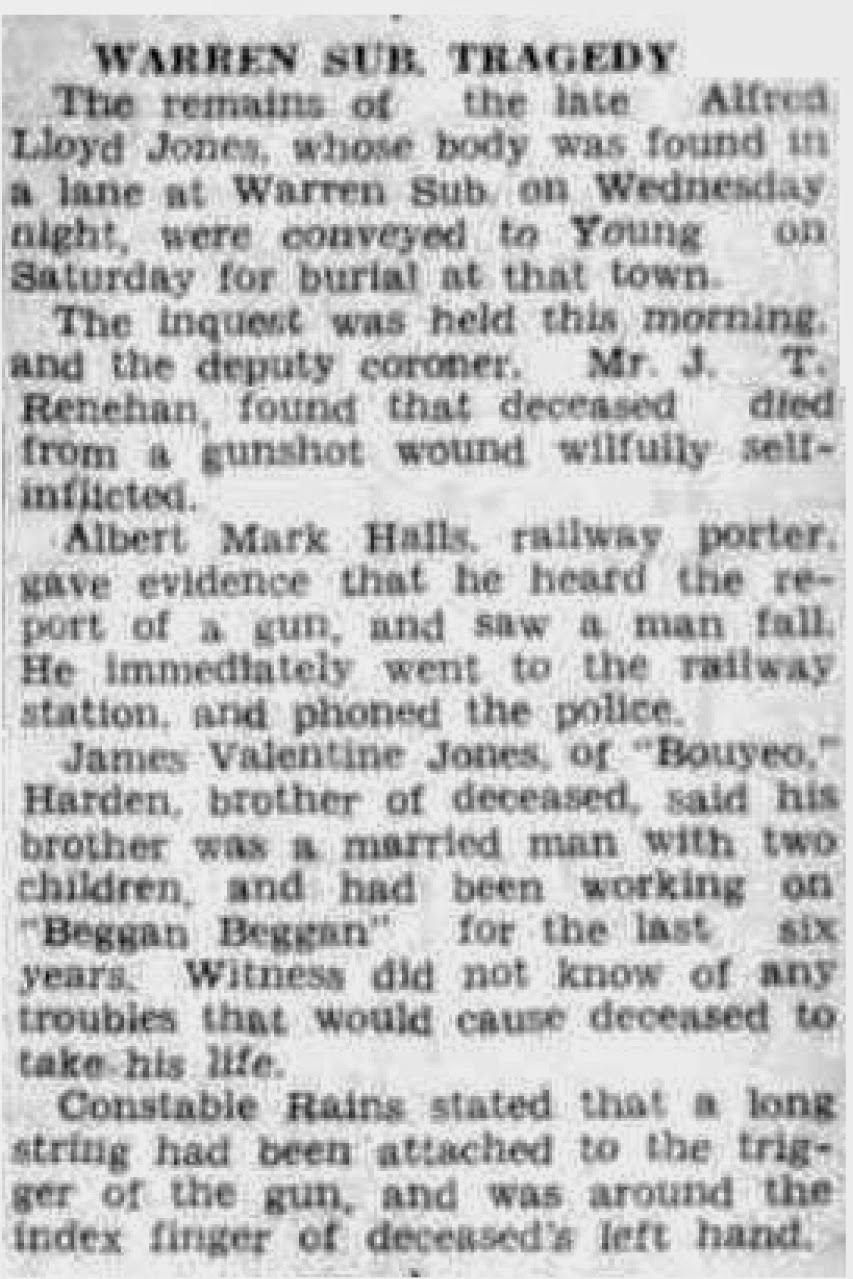 The remains of the late Alfred Lloyd Jones, whose body was found in a lane at Wareen Sub on Wednesday night, were conveyed to Young on Saturday for burial at that town.
The inquest was held this morning, and the deputy coroner, Mr. J.T. Renehan, found that deceased died from a gunshot wound wilfully self-inflicted.
Albert Mark Halls, railway porter, gave evidence that he heard the report of a gun, and saw a man fall.  He immdeiately went to the railway station, and phoned the police.
James Valentine Jones, of "Bouyeo," Harden, brother of deceased, said his brother was a married man with two children, and had been working on "Beggan Beggan" for the last six years.  Witness did not know of any troubles that would cause deceased to take his life.
Constable Rains stated that a long string had been attached to the trigger of the gun, and was around the index finger of deceased's left hand.