August 08, 2020
I started this post a while ago and was going to finally finish and post it yesterday however our four grandchildren came over and I got sidetracked.  Our grandchildren range in age now from six down to one;  they are so full of life (each of them lights up a room when they enter it) and we feel extremely blessed to have them in our lives.  After spending the afternoon researching this post, their arrival made this tragedy even more poignant for me and so I appreciated their company even more than usual and hugged them a bit tighter too!  This morning I woke up to a cold, wet and windy Wagga day and the thought of three little girls out in August weather like this, in light weight dresses with no shoes or jumpers impacted on me even more. Those poor babies! One of the girls was found still clasping her doll that she had carried with her over the whole tragic journey.
When my husband and I were looking around the Wagga Wagga Monumental Cemetery some time ago we came across a very sad headstone marking the deaths of three little girls lost in the bush in 1897.  Their story we found is a very heartbreaking, tragic one which touched us both deeply and I am sure it has touched others too; their grave had a little ornament and flowers that looked to be quite recently placed. 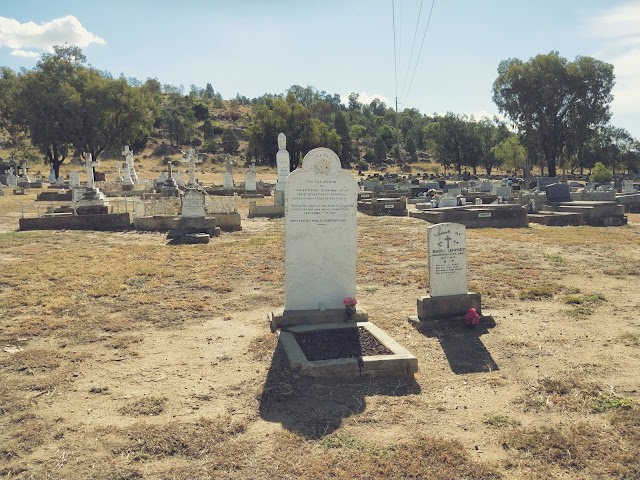 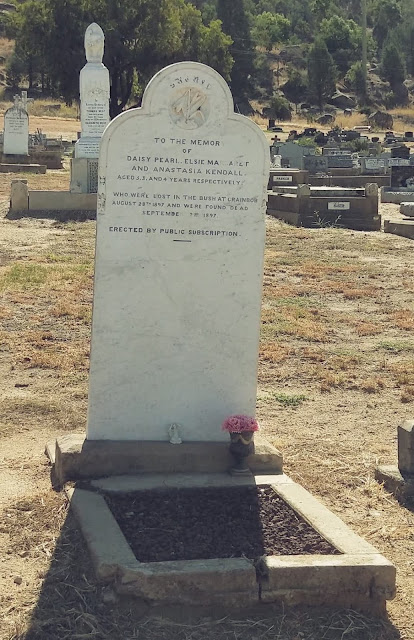 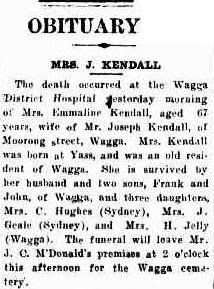 OBITUARY
MRS. J. KENDALL
The death occurred at the Wagga District Hospital yesterday morning of Mrs. Emmaline Kendall, aged 67 years, wife of Mr. Joseph Kendall, of Moorong street, Wagga.  Mrs. Kendall was born at Yass, and was an old resident of Wagga.  She is survived by her husband and two sons, Frank and John, of Wagga, and three daughters, Mrs. C. Hughes (Sydney), Mrs. J. Geale (Sydney), and Mrs. H. Jelly (Wagga).  The funeral will leave Mr. J. C. McDonald's premises at 2 o'clock this afternoon for the Wagga cemetery.
Transcript:
MR. J. KENDALL
The death occurred in Wagga yesterday of Mr. Joseph Kendall, of North Wagga, at the age of 85 years.  Mr. Kendall who was born in Wagga, was married to Miss Emerline Goodyer, who pre-deceased him.  A very old resident of Wagga, Mr. Kendall had resided all his life in this district.  He is survived by two sons and three daughters, Francis of Dubbo, John of Fitzmaurice street, Wagga, Mrs Hughes of Sydney, Mrs J. Geale of Sydney, and Mrs H Jelly of Yarragundry.  The funeral will take place to-morrow, the cortège moving from Mr. J. C. McDonald’s funeral parlor at 11 o’clock for the Wagga cemetery. 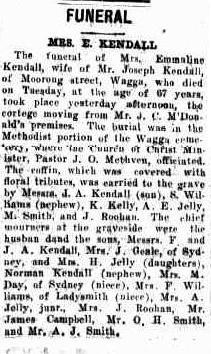 MARRIAGES.
KENDALL-KELLY.- At the Wesleyan Parsonage, Wagga, on March 24th, by the Rev. William Hill, Edward, youngest son of the late G. Kendall, of Coreinbob, Borambola, to Agnes, relict of the late J. Kelly, and fourth daughter of J. Goodger, deceased, of Yass.

RETURN THANKS.
MR. E. KENDALL, of Ladysmith, desires to RETURN THANKS to those who so liberally subscribed to the relief of his family in his late bereavement.
A.E. WATSON.
Secretary to the Relief Committee. 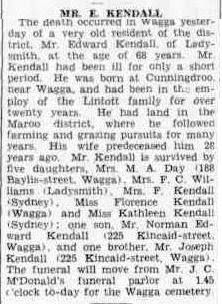 MR. E. KENDALL
The death occurred in Wagga yesterday of a very old resident of the district.  Mr. Edward Kendall, of Ladysmith, at the age of 68 years.  Mr. Kendall had been ill for only a short period.  He was born at Cunningdroo, near Wagga, and had been in the employ of the Lintott family for over twenty years. He had land in the Maroo district, where he followed farming and grazing pursuits for many years.  His wife predeceased him 28 years ago.  Mr. Kendall is survived by five daughters, Mrs. M. A. Day (188 Baylis-street, Wagga), Mrs. F. C. Williams (Ladysmith), Mrs. F. Kendall (Sydney), Miss Florence Kendall (Wagga) and Miss Kathleen Kendall (Sydney); one son, Mr. Norman Edward Kendall (225 Kincaid-street, Wagga), and one brother, Mr. Joseph Kendall (225 Kincaid-street, Wagga). The funeral will move from Mr. J. C. McDonald's funeral parlor at 1.45 o'clock to-day for the Wagga cemetery.

Source: Death registration for Alice May Bowes.  Retrieved from
https://www.familyhistory.bdm.qld.gov.au