October 06, 2013
Today's obituary is for Mary Ann Rhall (nee Camfield), she was the wife of my 4th Great Grand Uncle Peter John Rhall.  She was buried at Young Cemetery (see here). 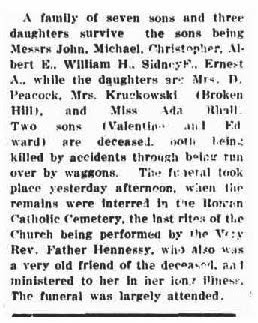 Once again it is our sad duty to record the death of another of the old pioneers of the Young district, for on Wednesday last Mrs. Mary Ann Rhall, relict of the late Mr. John P. Rhall, passed away at the age of 77 years.  She had been a sufferer for the past twelve months and during that time her life was continually despaired of, but owing to the ever watching and nursing of the members of her family, the inevitable end was delayed, and she passed away as stated on Wednesday morning, after a long and honorable life.
The late Mrs. Rhall was born at Bong Bong, Moss Vale, in the year 1838, and when 18 years of age married her late husband at Moss Vale, therefore the union which only death can sever lasted in this case for 59 years.  Mr. Rhall only predeceased his wife by five months, his death taking place on August 8th last year.
About 50 years ago, Mr. and Mrs. Rhall came to Young, and settled at Spring Creek, and in the course of their long life at Young saw many stirring episodes during the time of the famous riots of Lambing Flat.  The closing days were spent in town, residing near the Burrangong District Hospital.  The deceased was highly respected by all, and many kindly actions are attributed to her by those with whom she came in contact in daily life.
A family of seven sons and three daughters survive the sons being Messrs. John, Michael, Christopher, Albert E., William H., Sidney F., Ernest A., while the daughters are Mrs. D. Peacock, Mrs. Kruckowski (Broken Hill), and Miss Ada Rhall.  Two sons (Valentine and Edward) are deceased, both being killed by accidents through being run over by waggons.   The funeral took place yesterday afternoon, when the remains were interred in the Roman Catholic Cemetery, the last rites of the Church being performed by the Very Rev. Father Hennessy, who also was a very old friend of the deceased, and ministered to her in her long illness.  The funeral was largely attended.

THE Sons and Daughters of the late Mrs. John Rhall, desire to express their sincere thanks to their many kind freinds for letters, cards, and telegrams received in their late sad bereavement.

John Rhall and his wife Mary Ann (nee Camfield) had the following children: