October 27, 2013
My first cousin five times removed, Ada Lucy Baxter nee Rhall was born in 1882 the daughter of Peter 'John' Rhall and his wife Mary Ann (nee Camfield).   She married Henry Baxter in 1923 in Sydney, New South Wales.  Ada died on the 21st April 1937 at a private hospital in Sydney and was buried in the Catholic portion of the Young Cemetery near her parents and some of her siblings (see here). 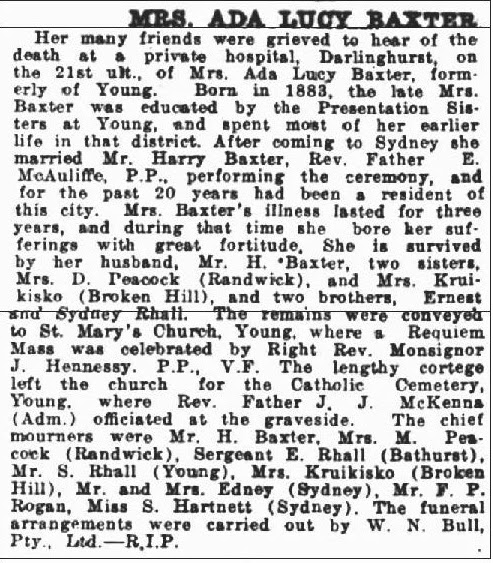 Her many friends were grieved to hear of the death at a private hospital, Darlinghurst, on the 21st ult., of Mrs. Ada Lucy Baxter, formerly of Young.  Born in 1883, the late Mrs. Baxter was educated by the Presentation Sisters at Young, and spent most of her earlier life in that district.  After coming to Sydney she married Mr. Harry Baxter, Rev. Father E. McAuliffe, P.P., performing the ceremony, and for the past 20 years had been a resident of this city.  Mrs. Baxter's illness lasted for three years, and during that time she bore her sufferings with great fortitude.  She is survived by her husband, Mr. H. Baxter, tow sisters, Mrs. D. Peacock (Randwick), and Mrs. Kruikisko (Broken Hill), and two brothers Ernest and Sydney Rhall.  The remains were conveyed to St. Mary's Church, Young, where a Requiem Mass was celebrated by Right Rev. Monsignor J. Hennessy, P.P., V.F.  The lengthy cortege left the church for the Catholic Cemetery, Young, where Rev. Father J.J. McKenna (Adm.) officiated at the graveside.  The chief mourners were Mr. H. Baxter, Mrs. M. Peacock (Randwick), Sergeant E. Rhall (Bathurst), Mr. S. Rhall (Young), Mrs. Kruikiski (Broken Hill), Mr. and Mrs. Edney (Sydney), Mr. F.P. Rogan, Miss S. Hartnett (Sydney).  The funeral arrangements were carried out by W.N. Bull, Pty., Ltd. - R.I.P.