My Grandfather was a Bigamist!

October 31, 2013
My late Aunt told me in confidence many years ago that her oldest sister had confided in her that their father was a bigamist and that it had been a huge public scandal, hitting the front page of the local newspapers and causing the family trouble with the Catholic Church.  She said that this was part of the reason my Grandmother rarely spoke about him, Nan kept her family secrets well hidden (My father was in his fifties before he ever found out!).  So when I started researching my tree it was high on the list of stories I wanted to check out.  The certificates for the two marriages were easy to obtain but they added to the mystery rather than solved it.  I even managed to get in contact with relatives of his first wife, only to find that she was quite a mystery to them too and they didn't know about her marriage to my Grandfather.   Today the first of a series of articles about the case has been released on Trove and I can finally confirm that the story was true and my Grandfather was a bigamist!  There are more stories coming on the case from the Newcastle Newspaper soon, so it seems like Christmas may come early for me this year. 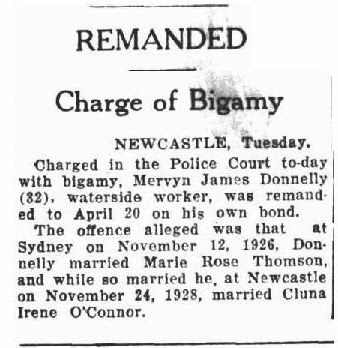 NEWCASTLE, Tuesday.
Charged in the Police Court to-day with bigamy, Mervyn James Donnelly (32), waterside worker, was remanded to April 20 on his own bond.
The offence allaged was that at Sydney on November 12, 1926, Donnelly married Marie Rose Thomson, and while so married he, at Newcastle on November 24, 1928, married Cluna Irene O'Connor.