October 13, 2013
Today's posting is for Laurence Joseph Dargan who was the husband of my first cousin five times removed Rosa Dargan nee Last.  Born about 1835 he was the son of Michael Dargan and his wife Mary. Originally from Fethard, Tipperary, Ireland he came to Australia around 1852.  He married Anastasia Mary Ryan in 1870, with the marriage registered at Binalong, New South Wales.  Anastasia died in 1904  (see here) and the couple had no recorded children.  In 1906 Laurence married Rosa Last and together they had a daughter Mary Clare Dargan in the same year.  After a long and prosperous life he died in 1922 and is buried at Binalong, New South Wales. 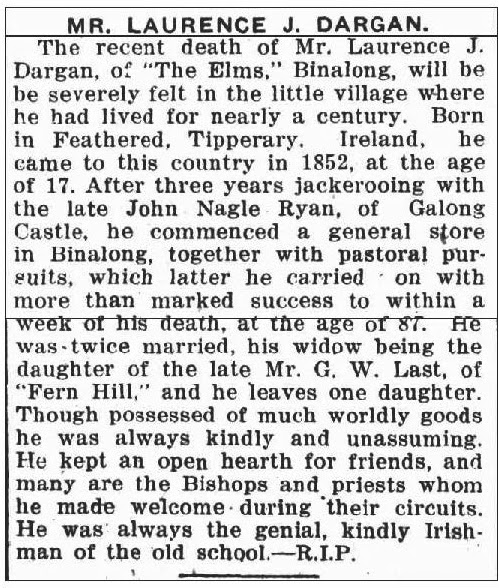 The recnt death of Mr. Laurence J. Dargan, of "The Elms." Binalong, will be severely felt in the little village where he had lived for nearly a century.  Born in Feathered, Tipperary. Ireland, he came to this country in 1852, at the age of 17.  After three years jackerooing with the late John Nagle Ryan, of Galong Castle, he commenced a general store in Binalong, together with pastoral pursuits, which latter he carried on with more than marked success to within a week of his death, at the age of 87.  He was twice married, his widow being the daughter of the late Mr. G. W. Last, of "Fern Hill." and he leaves one daughter.  Though possessed of much worldly goods he was always kindly and unassuming.  He kept an open hearth for friends, and many are the Bishops and priests whom he made welcome during the circuits.  He was always the genial, kindly Irishman of the old school.- R.I.P. 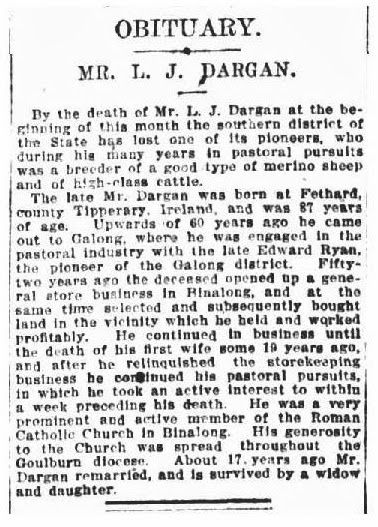 By the death of Mr. L.J. Dargan at the beginning of this month the southern district of the State has lost one of its pioneers, who during his many years in pastoral pursuits was a breeder of a good type of merino sheep and of high-class cattle.
The late Mr. Dargan was born at Fethard, county Tipperary, Ireland, and was 87 years of age.  Upwards of 60 years ago he came out to Galong, where he was engaged in the pastoral industry with the late Edward Ryan, the pioneer of the Galong district.  Fifty-two years ago the deceased opened up a general store business in Binalong, and at the same time selected and subsequently bought land in the vicinity which he held and worked profitably.  He continued in business until the death of his first wife some 19 years ago, and after he relinquished the storekeeping business he continued his pastoral pursuits, in which he took an active interest to within a week preceeding his death.  He was a very prominent and active member of the Roman Catholic Church in Binalong.  His generosity to the Church was spread throughout the Goulburn diocese.  About 17 years ago Mr. Dargan remarried, and is survived by a widow and daughter. 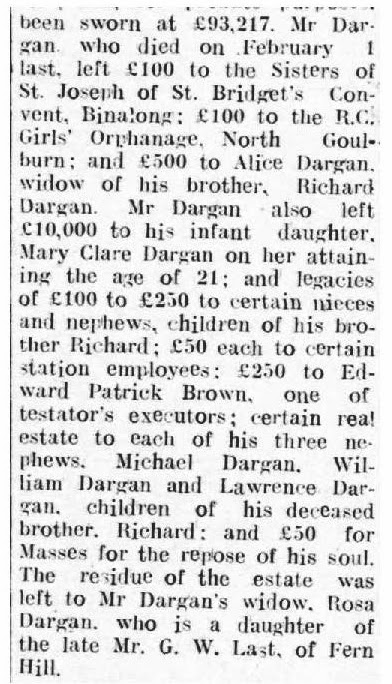 The will of the late Lawrence Joseph Dargan. of Binalong, grazier, has, probate purposes. been sworn at £93,217.  Mr. Dargan, who died on February 1 last, left £100 to the Sisters of St. Joseph of St. Bridget's Convent, Binalong :  £100 to the R.C. Girls' Orphanage, North Goulburn: and £500 to Alice Dargan. widow of Richard Dargan.  Mr Dargan also left £10,000 to his infant daughter, Mary Clare Dargan on her attaining the age of 21 : and legacies of £100 to £250 to certain nieces and nephews, children of his brother Richard ;  £50 each to certain station employees : £250 to Edward Patrick Brown, one of the testator's executors ; certain real estate to each of his three nephews, Michael Dargan, William Dargan and Lawrence Dargan, children of his deceased brother, Richard : and £50 for Masses for the repose of his soul.  The residue of the estate was left to Mr Dargan's widow, Rosa Dargan, who is a daughter of the late Mr. G.W. Last, of Fern Hill. 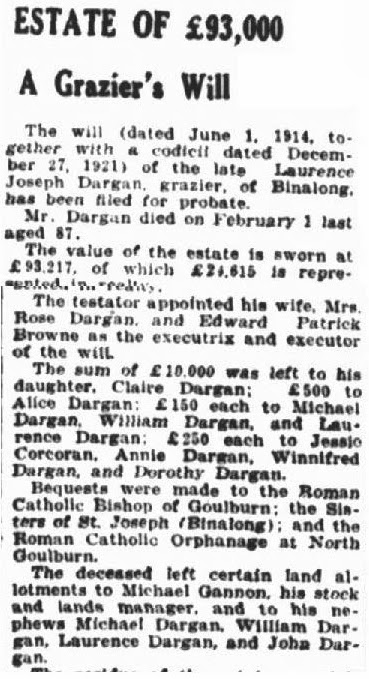 The will (dated June 1, 1914, together with a codicil dated December 27, 1921) of the late Laurence Joseph Dargan, grazier, of Binalong, has been filed for probate.
Mr. Dargan died on February 1 last aged 87.
The value of the estate is sworn at £93,217, of which £24,615 is represented in realty.
The testator appointed his wife, Mrs. Rosa Dargan, and Edward Patrick Browne as the executrix and executor of the will.
The sum of £10,000 was left to his daughter, Claire Dargan : £500 to Alice Dargan : £150 each to Michael Dargan, William Dargan, and Laurence Dargan : £250 each to Jessie Corcoran, Annie Dargan, Winnifred Dargan, and Dorothy Dargan.
Bequests were made to the Roman Catholic Bishop of Goulburn ; the Sisters of St. Joseph (Binalong) : and the Roman Catholic Orphanage at North Goulburn.
The deceased left certain land allotments to Michael Gannon, his stock and lands manager, and to his nephews Michael Dargan, William Dargan, Laurence Dargan, and John Dargan.
The residue of the estate was left to the testator's widow.

The BINALONG STORE, situated in the township of Binalong, at the corner of Monteagle and Stephen streets.  The store is a large and commodious brick building, and has been established since 1847, and is now in the occupation of Mr. L.J. Dargan, who is doing an excellent business. 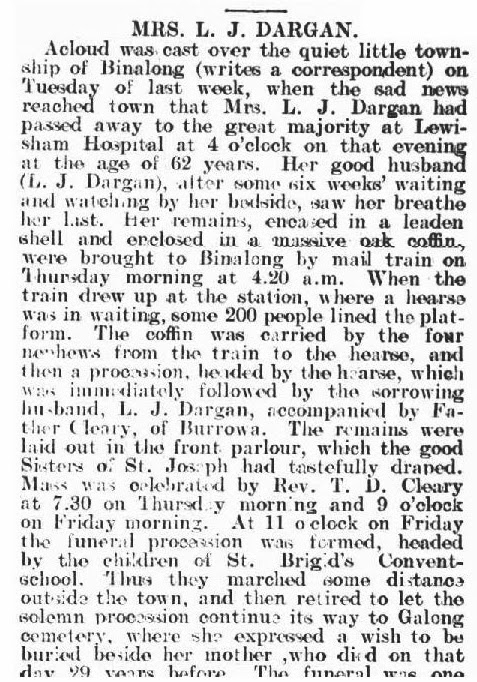 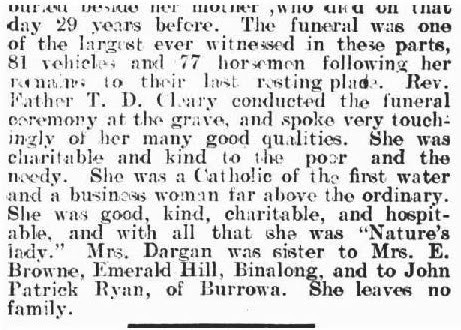 A cloud was cast over the quiet little township of Binalong (writes a correspondent) on Tuesday of last week, when the sad news reached town the Mrs. L.J. Dargan had passed away to the great majority at Lewisham Hospital at 4 o'clock on that evening at the age of 62 years.  Her good husband (L.J. Dargan), after some six weeks' waiting and watching by her bedside, saw her breathe her last.  Her remains, encased in a leaden shell and enclosed in a massive oak coffin, were brought to Binalong by mail train on Thursday morning at 4.20 a.m. When the train drew up at the station, where a hearse was in waiting, some 200 people lined the platform.  The coffin was carried by the four nephews from the train to the hearse, and then a possession, headed by the hearse, which was immediately followed by the sorrowing husband, L.J. Dargan, accompanied by Father Cleary, of Burrowa.  The remains were laid out in the front parlour, which the good Sisters of St. Joseph had tastefully draped.  Mass was celebrated by Rev. T.D. Cleary at 7.30 on Thursday morning and 9 o'clock on Friday morning.  At 11 o'clock on Friday the funeral procession was formed, headed by the children of St. Brigid's Convent-school.  Thus they marched some distance outside the town, and then retired to let the solemn procession continue its way to Galong cemetery, where she expressed a wish to be buried beside her mother, who died on that day 29 years before.  The funeral was one of the largest ever witnessed in these parts, 81 vehicles and 77 horsemen following her remains to their last resting place.  Rev. Father T.D. Cleary conducted the funeral ceremony at the grave, and spoke very touchingly of her many good qualities.  She was charitable and kind to the poor and the needy.  She was a Catholic of the first water and a business woman far above the ordinary.  She was good, kind, charitable, and hospitable, and with all that she was "Nature's lady."  Mrs. Dargan was sister to Mrs. E. Browne, Emerald Hill, Binalong, and to John Patrick Ryan, of Burrowa.  She leaves no family. 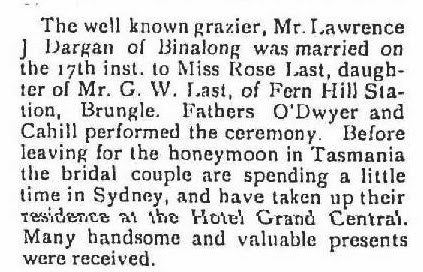 The well known grazier, Mr. Lawrence J Dargan of Binalong was married on the 17th Inst. to Miss Rose Last, daughter of Mr. G.W. Last, of Fern Hill Station, Brungle.  Fathers O'Dwyer and Cahill performed the ceremony.  Before leaving for the honeymoon in Tasmania the bridal couple are spending a little time in Sydney, and have taken up their residence at the Hotel Grand Central.  Many handsome and valuable presents were received. 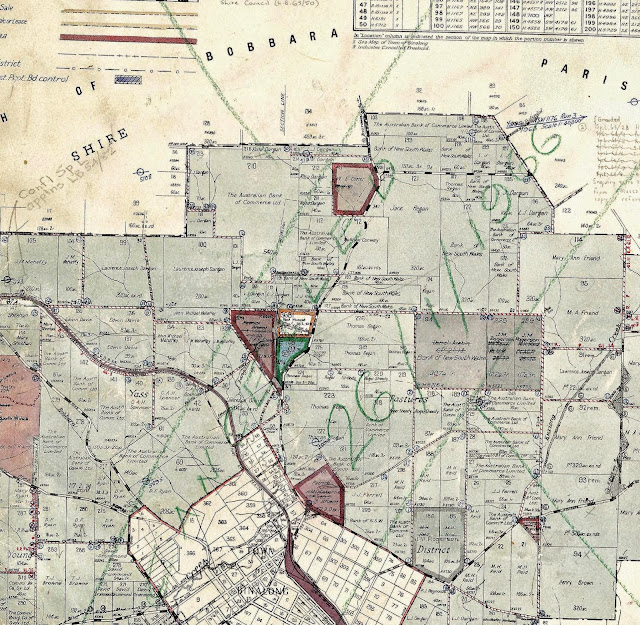