April 19, 2018
Today's wedding involves my 1st cousin four times removed Olive Marion Twemlow.  Olive was the daughter of Francis (Frank) Twemlow and his wife Tamar nee Guymer (see here for more information on this family).  While Arthur was the son of Benjamin and his wife Rhoda nee Jones.  Olive was Arthur's third wife; his first wife who he married in 1892, Emeline Elizabeth Beer nee Blackshaw died in 1903 and his second wife who he married in 1907, Martha Jane Beer nee Burgess died in 1923.  He was to marry one more time after Olive's death in 1943 when he married Marjory J Sutton.  Arthur Benjamin Beer died in 1945 at Goulburn. 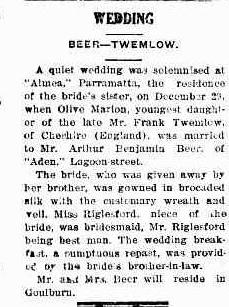 WEDDING
BEER-TWEMLOW.
A quiet wedding was solemnised at 'Almea,' Parramatta, the residence of the bride's sister, on December 29, when Olive Marion, youngest daughter of the late Mr. Frank Twemlow, of Cheshire (England), was married to Mr. Arthur Benjamin Beer, of 'Aden,' Lagoon-street.
The bride who was given away by her brother, was gowned in brocaded silk with the customary wreath and veil.  Miss Rigelsford, niece of the bride, was bridesmaid, Mr. Rigelsford being best man.  The Wedding breakfast, a sumptous feast, was provided by the bride's brother-in-law.
Mr. and Mrs. Beer will reside in Goulburn. 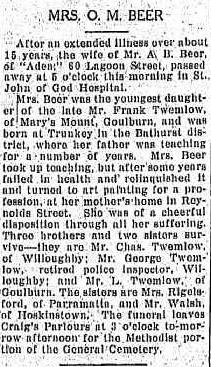 MRS. O.M. BEER
After an extended illness over about 15 years, the wife of Mr. A.B. Beer, of 'Aden,' 60 Lagoon Street, passed away at 6 o'clock this morning in St. John of God Hospital.
Mrs. Beer was the youngest daughter of the late Mr. Frank Twemlow, of Mary's Mount, Goulburn, and was born at Trunkey in the Bathurst district, where her father was teaching for a number of years.  Mrs. Beer took up teaching, but after some years failed in health and relinquished it and turned to art painting for a profession, at her mother's home in Reynolds Street.  She was of a cheerful disposition through all her suffering.  Three brothers and two sisters survive- they are Mr. Chas. Twemlow, of Willoughby; Mr. George Twemlow, retired police inspector, Willoughby; and Mr. L. Twemlow, of Goulburn.  The sisters are Mrs. Rigelsford, of Parramatta, and Mr. Walsh, of Hoskinstown. The funeral leaves Craig's Parlours at 3 O'clock to-morrow afternoon for the Methodist portion of the General Cemetery. 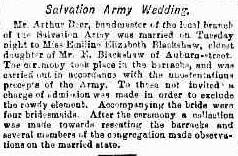 Salvation Army Wedding
Mr. Arthur Beer, bandmaster of the local branch of the Salvation Army was married on Tuesday night to Miss Emiline Elizabeth Blackshaw, eldest daughter of Mr. E. Blackshaw of Auburn-street.  The ceremony took place in the barracks, and was carried out in accordance with the unostentations precepts of the Army.  To those not invited a charge of admission was made in order to exclude the rowdy element. Accompanying the bride were four bridesmaids.  After the ceremony a collection was made towards reseating the barracks and several members of the congregation made observations on the married state. 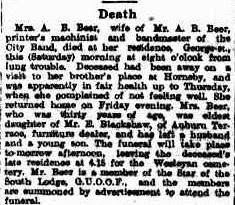 Death
Mrs. A.B. Beer, wife of Mr. A.B. Beer, printer's machinist and bandmaster of the City Band, died at her residence, George-st., this (Saturday) morning at eight o'clock from lung trouble.  Deceased had been away on a visit to her brother's place at Hornsby, and was apparently in fair health up to Thursday, when she complained of not feeling well.  She returned home on Friday evening.  Mrs. Beer, who was thirty years of age, was eldest daughter of Mr. E. Blackshaw, of Auburn Terrace, furniture dealer, and has left a husband and a young son.  The funeral will take place to-morrow afternoon, leaving the deceased's late residence at 4.15 for the Wesleyan cemetery.  Mr. Beer is a member of the Star of the South Lodge, G.U.O.O.F., and the members are summoned by advertisement to attend the funeral. 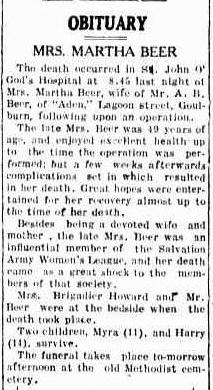 OBITUARY
MRS. MARTHA BEER
The death occurred in St. John Of God's Hospital at 8.45 last night of Mrs. Martha Beer, wife of Mr. A. B. Beer, of 'Aden,' Lagoon street, Goulburn, following upon an operation.
The late Mrs. Beer was 49 years of age, and enjoyed excellent health up to the time the operation was performed; but a few weeks afterwards complications set in which resulted in her death.  Great hopes were entertained for her recovery almost up to the time of her death.
Besides being a devoted wife and mother, the late Mrs. Beer was an influential member of the Salvation Army Women's League, and her death came as a great shock to the members of that society.
Mrs. Brigadier Howard and Mr. Beer were at the bedside when the death took place.
Two children, Myra (11) and Harry (24), survive.
The funeral takes place to-morrow afternoon at the old Methodist cemetery.

MARRIAGE
BEER-SUTTON.-On May 15, 1943, at Goulburn, NSW, by the Rev W. J. Harper, Marjory, youngest daughter of the late Capt and Emily Sutton, of Hobart, to Arthur Benjamin Beer, of 60 Lagoon St., Goulburn.

MR. A.B. BEER
There passed away in St. John of God Hospital yesterday afternoon, at the age of 76, a well known identity of Goulburn in the person of Mr. Arthur Benjamin Beer, husband of Mrs. Marjory Beer, of 60 Lagoon Street.
Son of the late Mr. and Mrs. Arthur Beer, Mr. Beer was born and spent all his life in this city.
A printer by trade, Mr. Beer was employed for 31 years by 'The Goulburn Herald.' He established his own job-printing business in Lagoon Street.
His principal interest apart from his trade was in music.  He could play several instruments and was bandmaster at one time of the Werriwa 3rd Infantry Band.  He had the gift of mechanical ingenuity, which he applied not only to his printing machinery, but to his music.  He devised a double flute which could easily have been exploited and made useful.  He was organist at the North Goulburn Methodist Church for a number of years.
Deceased is survived by one daughter, Myra (Mrs. W. Godfrey) of Maroubra, Sydney; two sons, Arthur and Harry; two sisters, Eva (Mrs. E. Latty, of Parramatta), and Fanny (Mrs. F. Thompson, of Victoria); and two brothers, Alfred and the deceased's twin, William, of Goulburn.  He also leaves eleven grand-children and twelve great grand-children.
The service, which was conducted by the Rev. W.J. Harper, was held at Craig's Chapel at 2 o'clock this afternoon, whence the funeral left for the Methodist portion pf the general cemetery.