April 22, 2018
Today's post involves the husband of my 4th Great Aunt Tamar Twemlow nee Guymer.  Francis (Frank) Twemlow was the son of William Twemlow and his wife Jane and was born on the 28th March 1835 in Yorkshire, England.  He married Tamar in 1862 in Goulburn and together they had a large family. Frank was a school teacher from 1885 to his retirement in 1900 in New South Wales at various locations. He died suddenly at home on the 30th June 1913 and was buried at the Old Goulburn Cemetery.  More information on Tamar and his family can be found here, here, here and here. 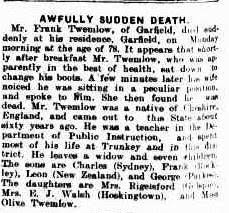 AWFULLY SUDDEN DEATH
Mr. Frank Twemlow, of Garfield, died suddenly at his residence, Garfield on Monday morning at the age of 78.  It appears that shortly after breakfast Mr. Twemlow, who apparently was in the best of health, sat down to change his boots.  A few minutes later his wife noiced he was sitting in a peculiar position and spoke to him.  She then found he was dead.  Mr. Twemlow was a native of Cheshire, England, and came out to this State about sixty years ago. He was a teacher in the Department of Public Instruction, and spent most of his life at Trunkey and in this district.  He leaves a widow and seven children.  The sons are Charles (Sydney), Frank (Rockley), Leon (New Zealand), and George (Parkes).  The daughters are Mrs. Rigelsford (Golspie), Mrs. E. J. Walsh (Hoskingtown), and Miss Olive Twemlow.

SUDDEN DEATH
GOULBURN, Tuesday. - Frank Twemlow, age 78, a resident of Garfield, died yesterday suddenly.  He sat down after breakfast to change his boots, apparently in good health.  A few minutes later his wife found him dead.

SUDDEN DEATH.
GOULBURN. Tuesday.
Frank Twemlow, a retired State school teacher, living at Garfield, yesterday morning sat down to change his boots.  His wife, a few minutes later noticed that his posture was peculiar and spoke to him, but found he was dead.  He was 78.  He had been apparently, in good health. 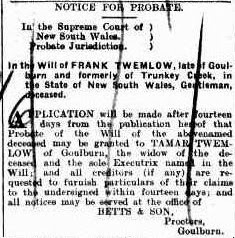 NOTICE FOR PROBATE.
In the Supreme Court of  )
New South Wales. )
Probate Jurisdiction.)
In the Will of FRANK TWEMLOW, late of Goulburn and former of Trunkey Creek, in the State of New South Wales, Gentleman, deceased.
APPLICATION will be made after fourteen days from the publication hereof that Probate of the Will of the abovenamed deceased may be granted to TAMAR TWEMLOW of Goulburn, the widow of the deceased and the sole Executrix named in the Will ; and all creditors (if any) are requested to furnish particulars of their claims to the undersigned within fourteen days ; and all notices may be served at the office of
BETTS & SON.
Proctors,
Goulburn.

THANKS
MRS. TWEMLOW AND FAMILY desire to THANK their many friends for their kindness and sympathy in their recent sad bereavement.

[11029]    Department of Public Instruction,
Sydney, 10th May, 1900.
HIS Excellency the Governor, with the advice of the Executive Council, has been pleased to approve of the retirement from the Service of Mr. Frank Twemlow, Teacher, House-to-house School, Brown's Yard,&c., - from the 30th April, 1900. 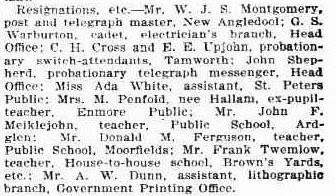