April 15, 2018
Today’s post involves my 4th Great Aunt Tamar Twemlow nee Guymer.  The daughter of David Guymer and his wife Marianne nee Bentley she was born in Great Wratting, England around 1842.  In 1853 she came to Australia with her parents and some of her siblings on board the ship Harriet.  In 1862 she married Francis Twemlow at Goulburn and together they had a large family.  Francis died in 1913 at Goulburn.  Tamar died at her residence in Reynold Street, Goulburn and was buried at the Old Goulburn Cemetery in 1924. 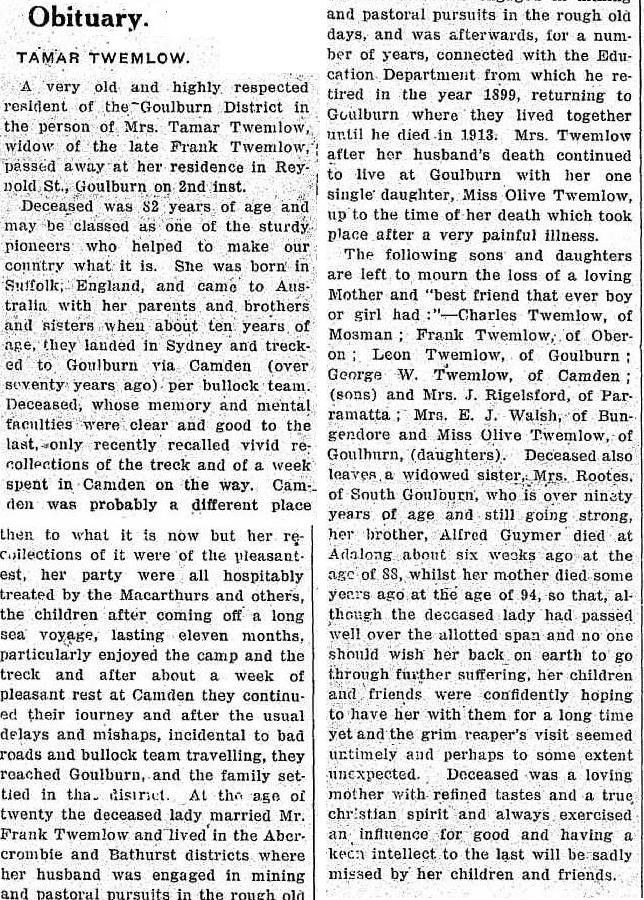 A very old and highly respected resident of the Goulburn district in the person of Mrs. Tamar Twemlow, widow of the late Frank Twemlow, passed away at her residence in Reynold St., Goulburn on 2nd inst.
Deceased was 82 years of age and may be classed as one of the sturdy pioneers who helped to make our country what it is.  She was born in Suffolk, England, and came to Australia with her parents and brothers and sisters when about ten years of age, they landed in Sydney and trecked to Goulburn via Camden (over seventy years ago) per bullock team.  Deceased, whose memory and mental faculties were clear and good to the last, only recently recalled vivid recollections of the treck and of a week spent in Camden on the way.  Camden was probably a different place then to what it is now but her recollections of it were of the pleasantest, her party were all hospitably treated by the Macarthurs and others, the children after coming off a long sea voyage, lasting eleven months, particularly enjoyed the camp and the treck and after about a week of pleasant rest at Camden they continued their journey and after the usual delays and mishaps, incidental to bad roads and bullock team travelling, they reached Goulburn, and the family settled in that district.  At the age of twenty the deceased lady married Mr. Frank Twemlow and lived in the Abercrombie and Bathurst districts where her husband was engaged in mining and pastoral pursuits in the rough old days, and was afterwards, for a number of years, connected with the Education Department from which he retired in the year 1899, returning to Goulburn where they lived together until he died in 1913. Mrs. Twemlow after her husbands death continued to live at Goulburn with her one single daughter, Miss Olive Twemlow, up to the time of her death which took place after a very painful illness.
The following sons and daughters are left to mourn the loss of a loving Mother and "best friend that ever boy or girl had :' - Charles Twemlow, of Mosman ; Frank Twemlow, of Oberon ; Leon Twemlow, of Goulburn ; George W. Twemlow, of Camden ; (sons) and Mrs. J. Rigelsford, of Parramatta ; Mrs. E. J. Walsh, of Bungendore and Miss Olive Twemlow, of Goulburn (daughters).  Deceased also leaves a widowed sister, Mrs. Rootes of South Goulburn, who is over ninety years of age and still going strong, her brother, Alfred Guymer died at Adelong about six weeks ago at the age of 88,  whilst her mother died some years ago at the age of 94, so that, although the deceased lady had passed well over the allotted span and no one would wish her back on earth to go through further suffering, her children and friends were confidently hoping to have her with them for a long time yet and the grim reaper's visit seemed untimely and perhaps to some extent unexpected.  Deceased was a loving mother with refined tastes and a true christian spirit and always exercised an influence for good and having a keen intellect to the last will be sadly missed by her children and friends.

Mrs. Twemlow, widow of the late Mr. Frank Twemlow, an old and highly respected resident of Goulburn, died on Tuesday night at her residence, 23 Reynolds-street, at the age of 82.  Her husband predeceased her eleven years ago.  The surviving members of the family are Messrs. C. Twemlow, Mosman ; Frank, Rockley ; Leon, Goulburn ; George, Camden ; Mrs. Rigelsford, Parramatta ; Mrs Walsh, Hoskinstown ; and Miss O. M. Twemlow, residing at home.
The late Mrs. Twemlow, who was of a bright and cheery disposition, had a large circle of friends.  She was born in Suffolk, England, and came to Goulburn with her parents when she was eleven years of age.  Her parents, Mr. and Mrs. David Guymer, arrived at Port Jackson in the ship 'Harriett.' and travelled to Goulburn per bullock team.  After her marriage Mrs. Twemlow went to the Bathurst district with her husband, who was in the Education Department.  On his retirement the family came to Goulburn and lived quietly at Mary's Mount until Mr. Twemlow's death.

The late Mrs. Twemlow.
Mrs. Twemlow, widow of the late Mr Frank Twemlow, an old and highly respected resident of Goulburn, died on Tuesday night, 2nd, December, at her residence, 23 Meynolds Street, Goulburn, at the age of 82 years. Deceased, who was a grandmother of Mrs Stan Gow, of Penrith, leaves four sons and three daughters.

Source: England and Wales Census 1851 at FamilySearch. Retrieved from https://www.familysearch.org

Note: Also on board with her were her parents David and Mary Ann Guymer and siblings Amelia, Alfred, Joseph, Benjamin, Mark, Frederick