June 28, 2017
Today's post involves the wedding of my 3rd Great Aunt Ada Ellen Worldon and Arthur Polsen at Gundagai in 1909.  My Great Grandmother Stella Jane Christina Worldon was their train-bearer. 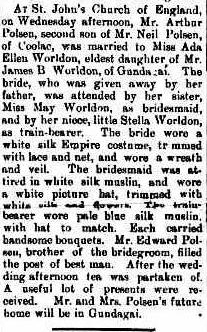 At St. John's Church of England, on Wednesday afternoon, Mr. Arthur Polsen, second son of Mr. Neil Polsen, of Coolac, was married to Miss Ada Ellen Worldon, eldest daughter of Mr. James B. Worldon of Gundagai.  The bride, who was given away by her father, was attended by her sister. Miss May Worldon, as bridesmaid, and by her niece, little Stella Worldon, as train-bearer.  The bride wore a white silk Empire costume, trimmed with lace and net, and wore a wreath and veil.  The bridesmaid was attired in white silk muslin, and wore a white picture hat, trimmed with white silk and flowers.  The train-bearer wore pale blue silk muslin, with hat to match.  Each carried handsome bouquets.  Mr. Edward Polsen, brother of the bridegroom, filled the post of best man.  After the wedding afternoon tea was partaken of. A useful lot of presents were received.  Mr. and Mrs. Polsen's future home will be in Gundagai.