June 25, 2017
Today's post involves my 2nd great uncle Ernest J. Battye.  Ernest was the son of Edward Joseph Battye and his wife Ellen Mary nee Pierse.  Born in Gundagai in 1886, he died in Cobar of typhoid fever on the 14th December 1907 and was buried in the Roman Catholic Cemetery in Cobar on the 16th December 1907. 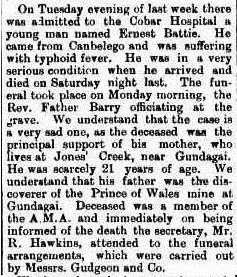 On Tuesday evening of last week there was admitted to the Cobar Hospital a young man named Ernest Battie.  He came from Canbelego and was suffering with typhoid fever.  He was in a very serious condition when he arrived and died on Saturday night last.  The funeral took place on Monday morning, the Rev. Father Barry officiating at the grave.  We understand that the case is a very sad one, as the deceased was the principal support of his mother, who lives at Jones' Creek, near Gundagai.  He was scarcely 21 years of age.  We understand that his father was the discoverer of the Prince of Wales mine at Gundagai.  Deceased was a member of the A.M.A. and immediately on being informed of the death the secretary, Mr. R. Hawkins, attended to the funeral arrangements, which were carried out by Messrs. Gudgeon and Co. 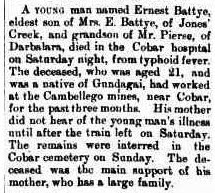 A YOUNG man named Ernest Battye, eldest son of Mrs. E. Battye, Jones' Creek, and grandson of Mr. Pierse, of Darbalara, died in the Cobar Hospital, on Saturday night, from typhoid fever.  The deceased, who was aged 21, and was a native of Gundagai, had worked at the Cambellego mines, near Cobar, for the past three months.  His mother did not hear of the young man's illness until after the train left on Saturday.  The remains were interred in the Cobar cemetery on Sunday.  The deceased was the main support of his mother, who has a large family. 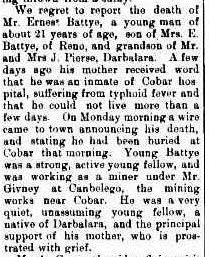 We regret to report the death of Mr. Ernest Battye, a young man of about 21 years of age, son of Mrs E. Battye, of Reno, and grandson of Mr. and Mrs. J. Pierse, Darbalara.  A few days ago his mother received word that he was an inmate of Cobar hospital, suffering from typhoid fever and that he could not live more than a few days.  On Monday morning a wire came to town announcing his death, and stating that he had been buried at Cobar that morning.  Young Battye was a strong, active fellow, and was working as a miner under Mr. Givney at Canbelego, the mining works near Cobar.  He was a very quiet, unassuming young fellow, a native of Darbalara, and the principal support of his mother, who is prostrate with grief. 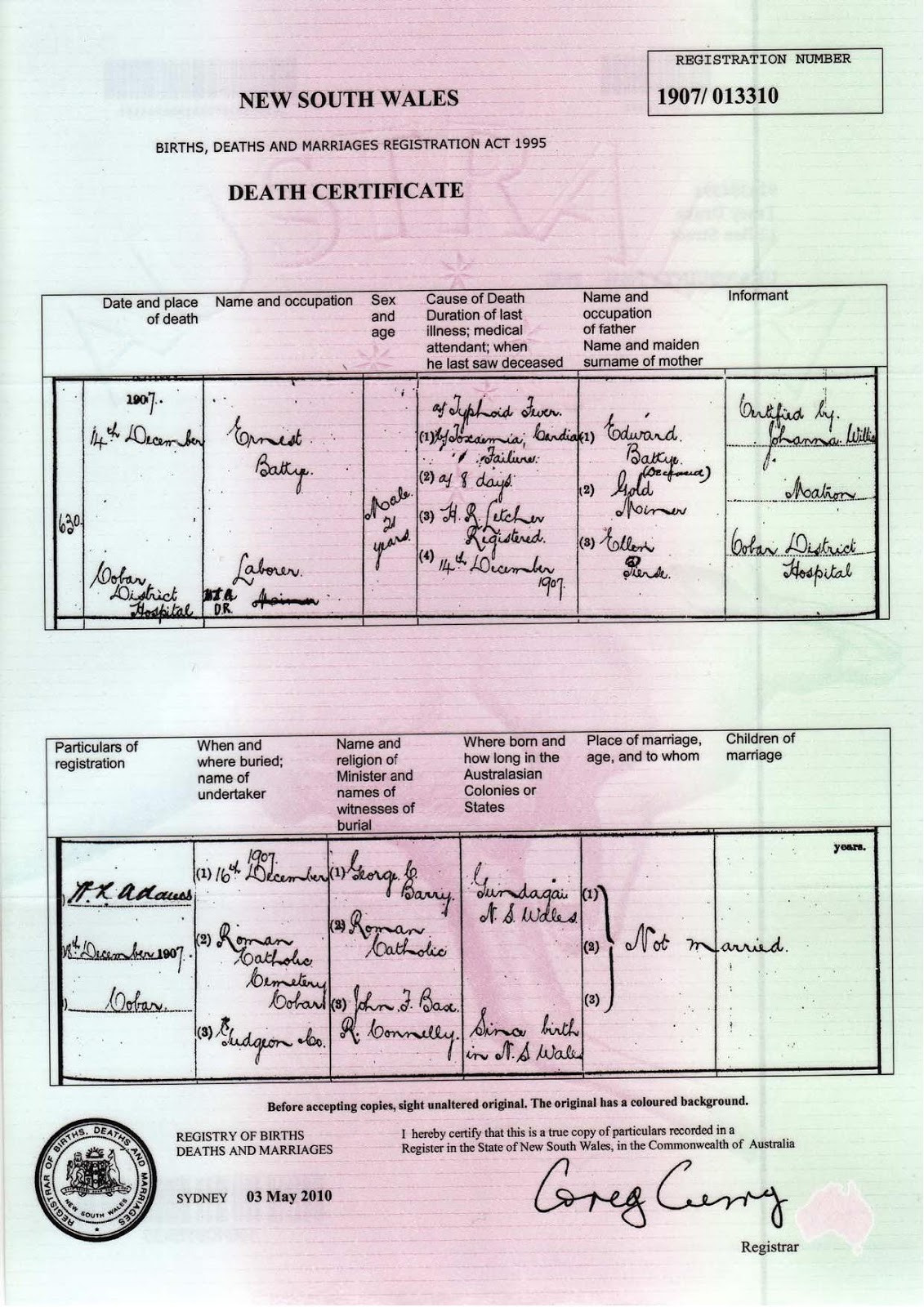