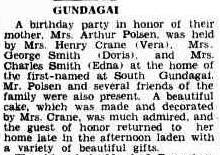 A birthday party in honor of their mother, Mrs Arthur Polsen, was held by Mrs Henry Crane (Vera), Mrs. George Smith (Doris), and Mrs. Charles Smith (Edna) at the home of the first-named at South Gundagai.  Mr. Polsen and several friends of the family were also present.  A beautiful cake, which was made and decorated by Mrs. Crane, was much admired, and the guest of honor returned to her home late in the afternoon laden with a variety of beautiful gifts.