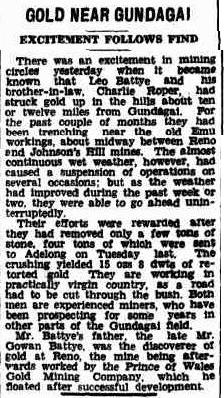 There was an excitement in mining circles yesterday when it became known that Leo Battye and his brother-in-law, Charles Roper, had struck gold up in the hills about ten or twelve miles from Gundagai.  For the past couple of months they had been trenching near the old Emu workings, about midway between Reno and Johnson's Hill mines.  The almost continuous wet weather, however, had caused a suspension of operations on several occasions; but as the weather had improved during the past week or two, they were able to go ahead uninterruptedly.
Their efforts were rewarded after they had removed only a few tons of stone, four tons of which were sent to Adelong on Tuesday last.  The crushing yielded 15 ozs and 8 dwts of retorted gold.  They are working in practically virgin country, as a road had to be cut through the bush.  Both men are experienced miners, who have been prospecting for some years in other parts of the Gundagai field.
Mr. Battye's father, the late Mr. Gowan Battye , was the discoverer of gold at Reno, the mine being afterwards worked by the Prince of Wales Gold Mining Company, which he floated after successful development. 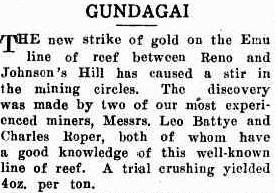 The new strike of gold on the Emu line of reef between Reno and Johnson's Hill has caused a stir in the mining circles.  The discovery was made by two of our most experienced miners, Messrs. Leo Battye and Charles Roper, both of whom have a good knowledge of this weel-known line of reef.  A trial crushing yielded 4oz. per ton.