June 20, 2017
Today's post involves my great great grandparents Edward Joseph Battye and his wife Ellen Mary nee Pierse.  The couple were married in Gundagai on the 27th April 1885 but had separated by about 1898.  Ellen died in Gundagai in 1944, while Edward's fate is thus far unknown. 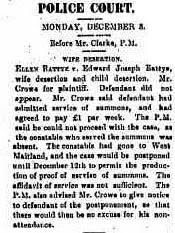 POLICE COURT.
MONDAY, DECEMBER 3.
Before Mr. Clarke, P.M.
ELLEN BATTYE vs Edward Joseph Battye, wife desertion and child desertion.  Mr. Crowe for plaintiff.  Defendant did not appear.  Mr. Crowe said defendant had admitted service of summons, and had agreed to pay £1 per week.  The P.M. said he could not proceed with the case, as the constable who served the summons was absent.  The constable had gone to West Maitland, and the case would be postponed until December 12th to permit the production of proof of service of summons.  The affidavit of service was not sufficient.  The P.M. also advised Mr. Crowe to give notice to defendant of postponement, so that there would then be no excuse for his nonattendance.

POLICE COURT
MONDAY, DECEMBER 17TH, 1900.
Before: Mr. W. Clarke, P.M.
WIFE DESERTION.
Ellen Battye vs Edward Joseph Battye.
No appearance of defendant.
Mr. Crowe appeared for complainant.
This case was adjourned from last court to enable Mr. Crowe to show proof of service of summons on defendant.
Constable Cahill deposed to serving summons on Battye at Yarrangobilly on 24th November.
A.J. Crowe, complainant's solicitor, deposed to posting registered letter to defendant on 6th instant, notifying him of the postponement of the case.  He received no reply.
Ellen Battye deposed: I married him on the 15th April 1885, at Mrs. Carrick's Gundagai, by Rev. Father Hennessy.  He has not contributed anything to my support for over 2 years.  He is a quartz miner and carpenter by trade.  He is well able to maintain me.
To the Bench: My husband left me over two years ago.  Had no row with him.  Often, wrote to him, but he never acknowledged any of my letters.  It was my last wish to take proceedings against him.
To Mr. Crowe: He is supposed to be living with another woman.
To the Bench: Defendant earned about £3 per week when at home.  I do nothing, and am kept by my father.
Mr. Crowe said that Battye had called upon him after the summons had been served, and expressed his willingness to contribute £1 per week towards the support of his wife and children.
The Bench made an order for the defendant to pay the sum of 10s per week for twelve months for his wife's maintenance, first payment to be made to Constable Bracken on Monday, 14th January.  Professional costs 21s, and costs of court 5s 10d were also given against defendant. 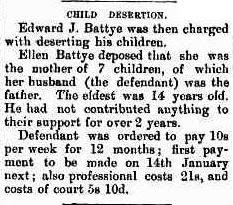 CHILD DESERTION.
Edward J. Battye was then charged with deserting his children.
Ellen Battye deposed that she was the mother of 7 children, of which her husband (the defendant) was the father.  The eldest was 14 years old.  He had not contributed anything to their support for over 2 years.
Defendant was ordered to pay 10s per week for 12 months ; first payment to be made on 14th January next; also professional costs 21s, and costs of court 5s 10d.