January 13, 2017
For many years I have been trying to track down a legal case involving a Worldon relative and child abuse from 1871. The information I had involved a reference from the Police Gazettes from 1871 in which it stated:

Looking through Trove's digital newspapers recently I found out more information on this case.

Transcript:
INDECENT ASSAULT.- John B. Worldon, alias Milbank, charged with indecently assaulting a child under 10 years of age, was remanded for a week. 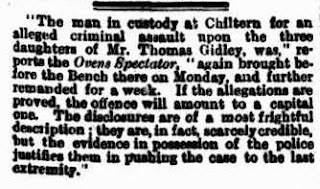 'The man in custody at Chiltern for an alleged criminal assault upon the three daughters of Mr. Thomas Gidley, was, 'reports the Ovens Spectator,' again brought before the Bench there on Monday, and further remanded for a week.  If the allegations are proved, the offence will amount to a capital one.  The disclosures are of a most frightful description ; they are, in fact, scarcely credible, but the evidence in possession of the police justifies them in pushing the case to the last extremity.'

INDECENT ASSAULT.- James Worldon was brought up on remand charged with an indecent assault.  Mr. Inspector Smith, who conducted the prosecution, said there were several charges against the prisoner, but he would at present confine himself to one.  Mr. Zincke appeared for the defence.  The alleged offence was committed on a child of Mr. Thos. Gidley, aged 11 years. A witness named Meacham deposed to his having taken a piece of paper from Gidley's children on the 2nd February ; this paper, referring in the most disgusting terms to the prisoner, was, in the opinion of the witness, written by one of Mr. Gidley's children ; he (witness) did not read the paper at the time ; he was too lazy, so he gave it to one Roscoe, the teacher of the girls, and told him to read it, as he thought there was something secret in it ; he also told him to take a copy of it ; at the time he gave the paper to Roscoe, witness was standing on a box in the passage hanging some paper ; he saw prisoner and Bessie Gidley together in a corner of the kitchen on one occasion ; he heard some remarks made ; at the time he was about four paces from prisoner and Bessie Gidley ; Roscoe drew his attention to what they were saying ; witness was on bad terms with Gidley when he left his employ.  A.K. Roscoe stated that he had employed as teacher of Mr. Gidley's children ; remembered the piece of paper being given him by Meacham ;  at the time it was given to him he was in the kitchen washing-up some dishes ; Meacham remarked at the time he gave it to him that the writing was filthy ; remembered the prisoner and Bessie Gidley being in the corner of the kitchen, and hearing some conversion between them ; witness and Meacham were about a foot and a half distant from the prisoner at the time ; witness minutely described what he had seen on several occasions between prisoner and the child ; (this portion of the evidence is unfit for publication.)  Mr. Zincke, in his cross-examination, severely handled the witness, and remarked upon the character such a man must have who could watch such proceedings as he alleged to have witnessed, and not have either knocked the man down, or given information to the father, and he being at the same time engaged by Mr. Gidley to instruct his children ; he (Mr. Zincke) called Roscoe from the witness-box, and told him to write the word 'journal' ; he contended that the writing of the same word in the note alleged to be written by one of Mr. Gidley's daughters, corresponded with the hand writing of the witness, and he was sure any expert would give the same opinion.  The bench thought a prima facie case had been made out against the prisoner, and committed him for trial at the Circuit Court, to be held at Beechworth on the 22nd April. 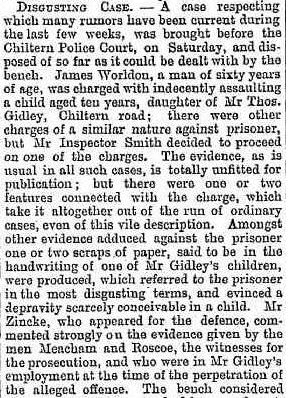 Transcript:
Disgusting Case. — "A case respecting which many rumors have been current during the last few weeks, was brought before the Chiltern Police Court, on Saturday, and disposed of so far as it could be dealt with by the bench. James Worldon, a man of sixty years of age, was charged with indecently assaulting a child aged ten years, daughter of Mr Thos. Gidley, Chiltern road ; there were other charges of a similar nature against prisoner, but Mr Inspector Smith decided to proceed on one of the charges. The evidence, as is usual in all such cases, is totally unfitted for publication ; but there were one or two features connected with the charge, which take it altogether out of the run of ordinary
cases, even of this vile description. Amongst other evidence adduced against the prisoner one or two scraps of paper, said to be in the handwriting of one of Mr Gidley's children, were produced, which referred to the prisoner in the most disgusting' terms, and evinced a depravity scarcely conceivable in a child. Mr Zincke, who appeared for the defence, commented strongly on the evidence given by the
men Meacham and Roscoe, the witnesses for the prosecution, and who were in Mr Gidley's employment at the time of the perpetration of the alleged offence. The bench considered that a prima facie case had been made out, and committed. Worldon to take his trial at the next sittings of the Beechworth Circuit Court, which commence" on Saturday, the 22nd April. 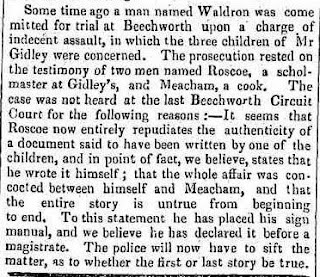 Transcript:
Some time ago a man named Waldron was comemitted for trial at Beechworth upon a charge of indecent assault, in which the three children of Mr. Gidley were concerned.  The prosecution rested on the testimony of two men named Roscoe, a schoolmaster at Gidley's, and Meacham, a cook.  The case was not heard at the last Beechworth Circuit Court for the following reasons :- It seems that Roscoe now entirely repudiates the authenticity of a document said to have been written by one of the children, and in point of fact, we believe, states that he wrote it himself ;that the whole affair was concocted between himself and Meacham, and that the entire story is untrue from beginning to end.  To this statement he has placed his sign manual, and we believe he has declared it before a magistrate.  The police will now have to sift the matter, as to whether the first or last story be true.

More information about the case was found in an article about another court case involving Gidley from 1872.

'Waldron was known by the sobriquet 'Milbank Jim.'  He was committed for trial about a year ago for a criminal assault on his (Gidley's) daughter, aged about 11 years.  No trial took place. A man named Roscoe falsely charged Waldron' with the offence. Roscoe was now stopping at the station.  Roscoe made an affidavit that Waldron did not commit the offence.'
James Baker Waldron, was boundary rider to Thomas Gidley since 1868.

So from all of this I have learned some more interesting facts about James Baker Worldon's life. From 1868 he was employed by Thomas Gidley, who was the lessee of El Dorado West Station near Chiltern, Victoria. He went by the nickname of 'Milbank Jim', so the Milbank alias mentioned in the 1855 prisoner records (see here) was an ongoing thing.  Obviously with such a nickname, his criminal past was common knowledge!  Surprisingly Thomas Gidley did not fire him after he was publicly accused of indecently assaulting Gidley's daughters, even though the case had received widespread media attention and many people probably still had suspicions and reservations about him and the case.
I have not yet found out if Meacham and Roscoe suffered any punishment for their testimony against Worldon, which seems strange to me if they didn't.  Could the fact that he was a known former convict have had a bearing on this, in that he wasn't regarded as an upstanding citizen so making false allegations against him was not regarded as a serious crime?  Regardless of this what about the Gidley family, especially their daughters, in particular Bessie Gidley who had been publically named in the case, shouldn't there have been justice for her and them as their reputations and community standing would have been greatly affected by this case.  I intend to do more research and find out more about the people involved in this case and will update my blog with my findings in the near future.