MISS Kathleen McInerney, of New Mollyan, and Mr. Sylvester Gervase Donnelly, also New Mollyan, were married at St. Lawrence's Catholic Church, Coonabarabran.  The bride, who was given away by her brother-in-law Mr. J.L. Opferkuch, was frocked in a beautiful gown of magnolia satin, wearing an embroidered veil which was held in place by a coronet of orange blossoms.  She carried a gorgeous bouquet of pink and cream rosebuds with asparagus fern, which was made by Mrs George Hogden, who also supplied the roses.
Mrs E. Hanalow, sister of the bride, was matron of honor, and Mr. Frank Ryan carried out the duties of best man.
The future home of the happy couple will be at Mendooran.

The couples engagement had been announced in 1937.

THE engagement is announced of Miss Kathleen McInerney, daughter of Mrs McInerney, of Binnaway, to Sylvester Donnelly, of Mollyan, youngest son of Mrs. Ferguson , of Tamworth. 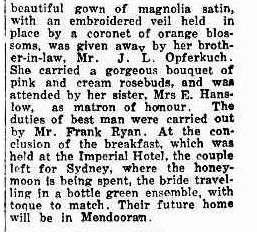 A pretty, though quiet wedding was solemnised in St. Lawrence's Catholic Church, Coonabarabran, on 11th April, when Miss Kathleen McInerney, of New Mollyan, near Mendooran, was married to Mr Sylvester Donnelly, also of New Mollyan.  The bride, frocked in a beautiful gown of magnolia satin, with an embroidered veil held in place by a coronet of orange blossoms, was given away by her brother-in-law Mr J.L. Opferkuch.  She carried a gorgeous bouquet of pink and cream rosebuds, and was attended by her sister, Mrs E. Hanslow, as matron of honor.  The duties of best man were carried out by Mr. Frank Ryan.  At the conclusion of the breakfast, which was held at the Imperial Hotel, the couple left for Sydney, where the honeymoon is being spent, the bride travelling in a bottle green ensemble, with toque to match.  Their future home will be in Mendooran.