January 30, 2017
My great great uncle Edward Donnelly was born in 1868 the son of James Donnelly and his wife Mary nee Gallagher.  He was destined to follow his father into farming until he suffered a life altering bout of rheumatic fever when he was sixteen.  With hard manual labour ruled out for him, a change in career direction was needed so he returned to school and eventually passed the examinations to become a teacher. In 1885 he was appointed as a House To House teacher at Bourbah and Merri Merri. 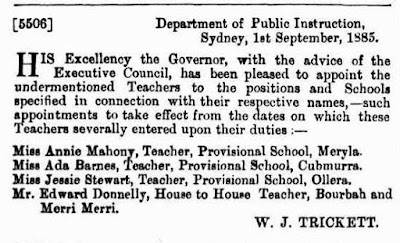 In 1886 he was instructed to act as teacher at Bundemar Provisional.  According to his teachers records in 1887 he was severally reprimanded for ill-treatment of a female pupil and was to be removed to another school without delay.  Then on the 23rd February 1887 he was appointed to Bone Bone Provisional School. 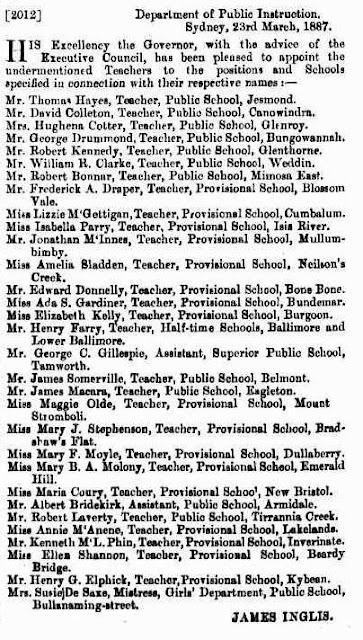 On the 8th April 1896 he married Margaret Annie Buckley, they went on to have two children a son Sylvester Gervase Donnelly in 1897 and a daughter Frances Eulalie Donnelly in 1899.

Schoolmaster Donnelly takes a deep interest in his charge, consequently the rising generation of this place are well advanced in their learning.


With his health deteriorating in 1906 he was granted three months leave on full pay.

Mr E Donnelly of the local public school is away on sick leave.  Mr. J.P. Jones is now relieving here during his absence.  He appears to be an excellent teacher, and evidently believes in efficacy of the cane.  But too much cane is apt to make 'Jack' a dull boy.


His health failed to recover and in 1907 he resigned from his position due to ill health. 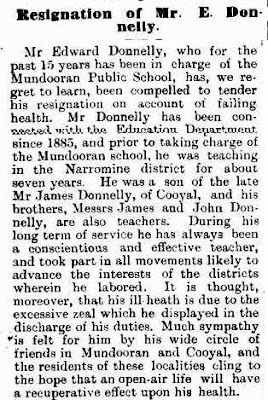 Resignation of Mr. E. Donnelly.
Mr Edward Donnelly, who for the past 15 years has been in charge of the Mundooran Public School, has, we regret to learn, been compelled to tender his resignation on account of failing health.  Mr Donnelly has been connected with the Education Department since 1885, and prior to taking charge of the Mundooran school, he was teaching in the Narromine district for seven years.  He was a son of the late Mr James Donnelly, of Cooyal, and his brothers Messrs James and John Donnelly, are also teachers.  During his long term of service he has always been a conscientious and effective teacher, and took part in all movements likely to advance the interests of the districts wherein he labored.  It is thought, moreover, that his ill-health is due to the excessive zeal which he displayed in the discharge of his duties.  Much sympathy is felt for him by his wide circle of friends in Mundooran and Cooyal, and residents of these localities cling to the hope than an open-air life will have a recuperative effect upon his health. 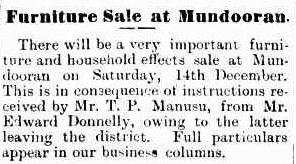 There will be a very important furniture and household effects sale at Mundooran on Saturday, 14th December.  This is in consequence of instructions received by Mr. T.P. Manusu, from Mr. Edward Donnelly, owing to the latter leaving the district.  Full particulars appear in our business columns.

FOR ABSOLUTE SALE
WITHOUT RESERVE AT
MUNDOORAN,
ON
Saturday, Dec14th,
At 11a.m. sharp.

On Saturday evening a large number of friends assembled in the Hall to wish Mr and Mrs Edward Donnelly good-bye and present them with tokens of friendship, prior to their departure from the district.  Mr Donnelly has been a resident of this district for upwards of 20 years, and for the past 12 years has been in charge of the local public school.  During the last three years his health has been very indifferent, frequently causing him to seek medical aid, and consequently retarding him in the performance of his scholastic duties.  He has thus decided to try a change of climate or occupation, with a view to recovering his failing health.  The presentation to Mr Donnelly took the form of a purse of sovereigns and a very nice illuminated address, which well expressed the sentiments of the donors.  Several persons spoke in laudatory terms of their guest's sterling worth, excellent citizenship and experience, and expressed profound regret that it was necessary for him and his good wife to depart from amongst them.  Mrs Donnelly was made the recipient of a gold trinket as a token of the esteem of which she is held in the neighbourhood.  After the presentation, dancing was indulged in for a couple of hours, which terminated a very pleasant evening.

Edward Donnelly died on the 9th February 1908 aged thirty nine, leaving his wife Margaret nee Buckley and their two young children Sylvester and Frances.  His burial details and a photograph of his grave can be found here.

The death occurred at his mother's residence, Cooyal, on Sunday night last of Mr. Edward Donnelly, late teacher of the Mundooran Public School.  Deceased, who was about 40 years of age, was a native of Cooyal, from where he spent his boyhood days. From an early age he gave promise of much ability, and, as schools were not known in the locality at this time, his education was undertaken by his father, the late Mr James Donnelly, who was a man of brilliant attainments.  Young Donnelly was reared up to a vigorous life on the farm, and his many good qualities and filial love soon made him the admiration of the district, and the pride of his loving parents.  When he was 16 years of age he was stricken with rheumatic fever.  He recovered, but his system was so weakened that it was not considered advisable by his medical advisers to send him back to strenuous life on the farm.  He then went to school again, and under the late Mr McDonough's tuition, he passed the examination for teachers.  That was in the year 1885, and he remained in the service of the Department of Public Instruction till a few weeks before his death.  About two years ago he overtaxed his strength in lifting some object, and hemorrhage of the lungs periodically took place ever since.  Consumption, in a galloping form, recently developed and eventually caused his death.  The late Mr Donnelly was a conscientious and able teacher, and a desirable citizen during his long residence at Mundooran.  Only recently, on the occasion of his retirement from the service, he was presented with an illuminated address by the residents of that town, and general regret was expressed at his departure from the district where he had labored so long and arduously.  That regret has now been intensified into grief at his early demise.  The same feeling pervades the Cooyal district, and his funeral on Tuesday, was one of the largest ever seen in the district.  He leaves a wife and two children.  Mrs Donnelly is a daughter of Mr Buckley of Mundooran. 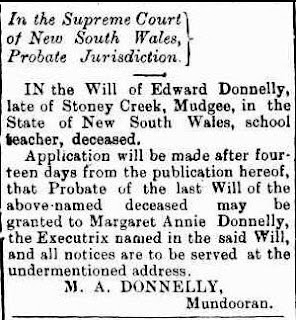 In the Supreme Court of New South Wales, Probate Juridiction

IN the Will of Edward Donnelly, late of Stoney Creek, Mudgee, in the State of New South Wales, school teacher, deceased.
Apllication will be made after fourteen days from the publication hereof, that Probate of the last Will of the above-named deceased may be granted to Margaret Annie Donnelly, the Executrix named in the said Will, and all notices are to be served at the undermentioned address.
M. A. DONNELLY,
Mundooran