SMITH.- At the Ovens Benevolent Asylum, on the 13th April, 1898, Sarah Jane Smith, formerly of Beechworth, aged 55 years.  Two years in the Asylum. 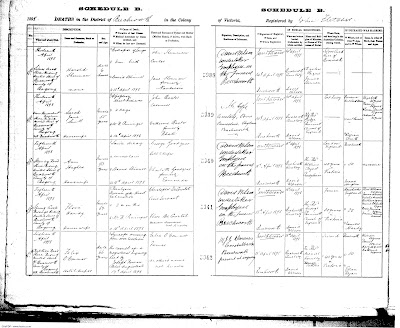 Further research into Sarah's time at the Ovens Benevolent Asylum led me to these articles on Trove.

The ordinary meeting of the committee of the above institution was held on Wednesday evening.  Present  - The President (Mr. C.J. Flower) in the chair, Messrs Ingram, Warren, O'Connor, Northeast, Cahn, Morrison and Foster.
The minutes of the previous meeting were read and confirmed.
HOUSE COMMITTEE'S REPORT.
The House Committee;s report contained no feature of public interest, being occupied entirely with routine matters, with the exception of an acknowledgement of the contribution made to the funds by the Charities Ball committee.
Mr. CAHN moved the adoption of the report, which was seconded by Mr. WARREN, and agreed to.
PATIENTS COMMITTEE'S REPORT.
The Patients Committee reported that there were no new cases of outdoor relief.  They had considered the case of Sarah J. Smith, on whose behalf application for admission had been made, and had decided on leaving it to be dealt with by the general committee.
With regard to this latter case.
Mr. INGRAM informed the committee, that Mrs Smith was an old women, crippled and thoroughly helpless, who had been supported by her daughter.  The daughter had now gone to Albury, and she had been compelled to leave the mother behind, who was altogether unable to do anything to assist herself.
Mr. WARREN moved that the committees report be adopted, and that Mrs Smith be admitted as an inmate.
Mr. CAHN seconded the motion , which was agreed to. 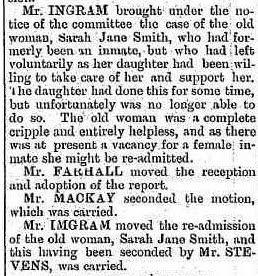 Mr. INGRAM brought under the notice of the committee the case of the old woman, Sarah Jane Smith, who had formerly been an inmate, but who had left voluntarily as her daughter had been willing to take care of her and support her.  The daughter had done this for some time, but unfortunately was no longer able to do so.  The old women was a complete cripple and entirely helpless, and as there was at present a vacancy for a female inmate she might be re-admitted.
Mr FARHALL moved the reception and adoption of the report.
Mr. MACKAY seconded the motion, which was carried.
Mr. INGRAM moved the re-admission of the old women, Sarah Jane Smith, and this having been seconded by Mr. STEVENS, was carried.

The establishment of the Ovens Benevolent Asylum on Warner Road was first mooted in 1861, when on the 22nd July a public meeting was held with the object of building a district Benevolent Asylum. The function of this Asylum was to provide accommodation and care for gold miners who were permanently injured, and for women and children who were penniless, homeless, or whose parents were guests of the State.

An early photograph of the Ovens Benevolent Asylum can be found here.

As is commonly the case I have been left with more questions than answers with this information. How did Sarah become a cripple?  Where was her husband at this time? Which of her daughters was looking after her and then moved to Albury in 1892? Was it the same daughter that she left the Asylum to live with?  More research is required obviously but at least I have more definitive leads to follow up on now.