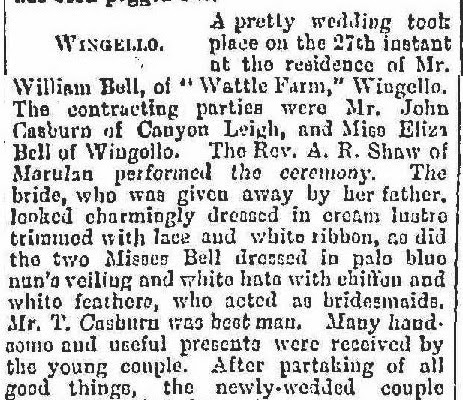 A pretty wedding took place on the 27th instant at the residence of Mr. William Bell, of "Wattle Farm," Wingello.  The contracting parties were Mr. John Casburn of Canyon Leigh, and Miss Eliza Bell of Wingello.  The Rev. A.R. Shaw of Marulan performed the ceremony.  The bride, who was given away by her father, looked charmingly dressed in cream lustre trimmed with lace and white ribbon, as did the two Misses Bell dressed in pale blue nun's veiling and white hats with chiffon and white feathers, who acted as bridesmaids.  Mr. T. Casburn was best man.  Many handsome and useful presents were received by the young couple.  After partaking of all good things, the newly-wedded couple departed for their future home.