November 26, 2013
The only things that my father had belonging to his father was a couple of photographs, some official documents and some of his original poetry.  I have always wondered if he had any of it published but had never found a copy of any of his works anywhere, until today thanks to Trove!
Mervyn James Phillip Donnelly was born at Bourke in 1905 the son of John Joseph Donnelly and his wife Bridget Anastasia (nee Lambert).  John Joseph Donnelly (known as Jack) was a teacher at Yantabulla at the time.  John and his brother James (Jim) had been drovers together and had studied for their teaching qualifications by correspondence.  The Donnelly brothers grew up in the Mudgee, Cooyal area and had another brother Edward who was also a school teacher.  Bridget Lambert, Mervyn's mother had been a school teacher in the 1890's and was once romantically involved with Henry Lawson. Jack and Jim Donnelly were also acquainted with Henry Lawson.  Jim Donnelly married Mary Ann Lambert, one of Bridget's sisters in 1905.
Mervyn who was commonly known as James or Jim married Marie Rose Thomson in Sydney in November 1926.  Then in November 1928 he married my grandmother Cluna Irene O'Connor, without informing her that he was already married.  After nearly ten years of marriage and four children together the past finally caught up with him and in 1938 he was tried for bigamy with him pleading guilty.  After the trial my grandparents stayed together and went on to have another two children, the last of whom was my father.  Unfortunately Mervyn had been of poor health for a number of years and in January 1943 when my father was only twelve months old he died at Morrisset Mental Hospital of possible tuberculosis. He was buried at Sandgate Cemetery in Newcastle. 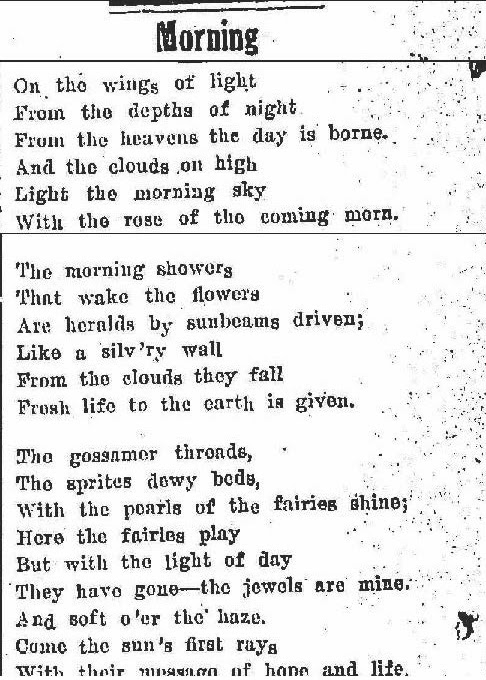 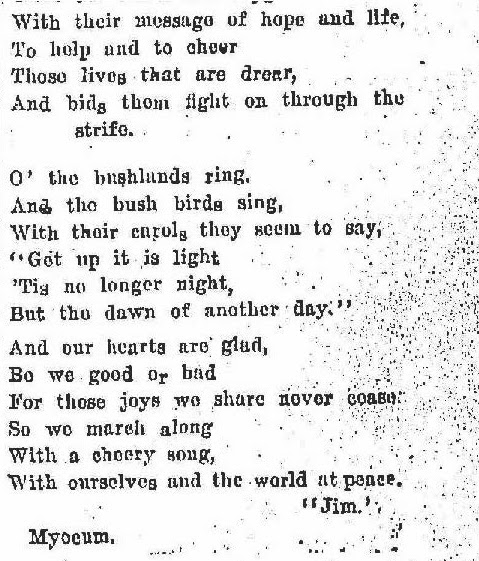 
The version we have is below:

On the wings of light
From the depths of night
From the heavens the day is borne;
And the clouds on high,
Glowing in the sky
With the rose of the coming dawn.

The morning showers
That wake the flowers
Are heralds by sunbeams driven,
And they hover nigh,
Then they fade and die
Fresh life to the earth is given.

The gossamer threads
The sprites dewy beds
With the pearls of the fairies shine;
And the fairies play,
But with the light of day
They are lost, and the jewels are mine.

And soft o’er the haze
Come the suns first rays
With their message of life and hope;
To help and to cheer,
Those lives that are drear,
And with cares of this life can’t cope.

Oh the bush birds sing
And the bushlands ring
With their carols they seem to say
“Get up it is light
Tis no longer night
But the dawn of another day.”

And our hearts are glad,
Be we good or bad,
For these joys we share never cease;
And we march along
With a cheery song
With ourselves and the world at peace.