Trove Tuesday: Fright of their lives!

November 12, 2013
I found this story when researching the Worldon branch of my family tree on Trove this week. 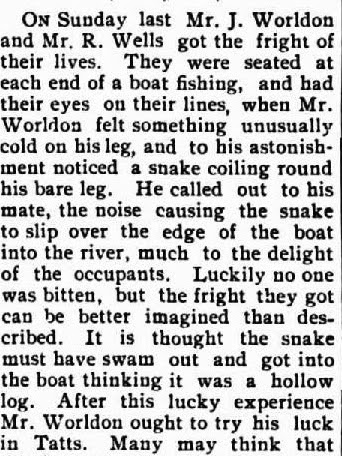 ON Sunday last Mr. J. Worldon and Mr. R. Wells got the fright of their lives.  They were seated at each end of a boat fishing, and had their eyes on their lines, when Mr. Worldon felt something unusually cold on his leg, and to his astonishment noticed a snake coiling round his bare leg.  He called out to his mate, the noise causing the snake to slip over the edge of the boat into the river, much to the delight of the occupants.  Luckily no one was bitten, but the fright they got can be better imagined than described.  It is thought the snake must have swam out and got into the boat thinking it was a hollow log.  After this lucky experience Mr. Worldon ought to try his luck in Tatts.  Many may think that this is an everyday snake yarn, but both Mr. Worldon and Mr. Wells vouch for its accuracy, and as they are not given to telling fairy tales the incident can be believed.