November 10, 2013
Sarah Jane Bell was born in 1871, the daughter of William Henry Bell and his wife Catherine (nee Campbell).  My connection with her is that she is my first cousin four times removed.  She died on the 7th March 1927 at the Bowral Hospital. 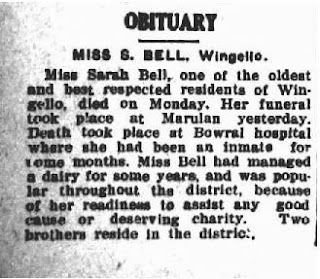 Miss Sarah Bell, one of the oldest and best respected residents of Wingello died on Monday.  Her funeral took place at Marulan yesterday.  Death took place at Bowral hospital where she had been an inmate for some months.  Miss Bell had managed a dairy for some years and was popular throughout the district, because of her readiness to assist any good cause or deserving charity.  Two brothers reside in the district.

Miss Sarah Bell, one of the oldest residents of Wingello, died in the Berrima District Hospital on Monday, March 7th.  The Interment took place at Marulan. 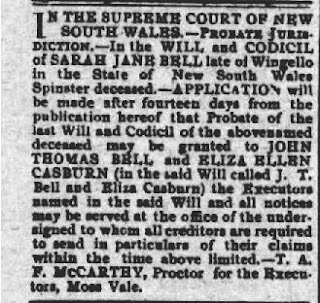 IN THE SUPREME COURT OF NEW SOUTH WALES.- PROBATE JURISDICTION.- In the WILL and CODICIL of SARAH JANE BELL late of Wingello in the State of New South Wales Spinster deceased.- APPLICATION will be made after fourteen days from the publication hereof that Probate of the last Will and Codicil of the abovenamed deceased may be granted to JOHN THOMAS BELL and ELIZA ELLEN CASBURN (in the said Will called J.T. Bell and Eliza Casburn) the Executors named in the said Will and all notices may be served at the office of the undersigned to whom all creditors are required to send in particulars of their claims within the time above limited.- T.A.F.McCARTHY, Proctor for the Executors, Moss Vale.