November 17, 2013
Richard James Bell was born in 1881, the son of William Henry Bell and his wife Catherine (nee Campbell). My connection to him is that he is my first cousin four times removed.  In 1919 Richard married Mary Alice Richmond.  He died in 1935 at Goulburn and was buried at Marulan Cemetery. 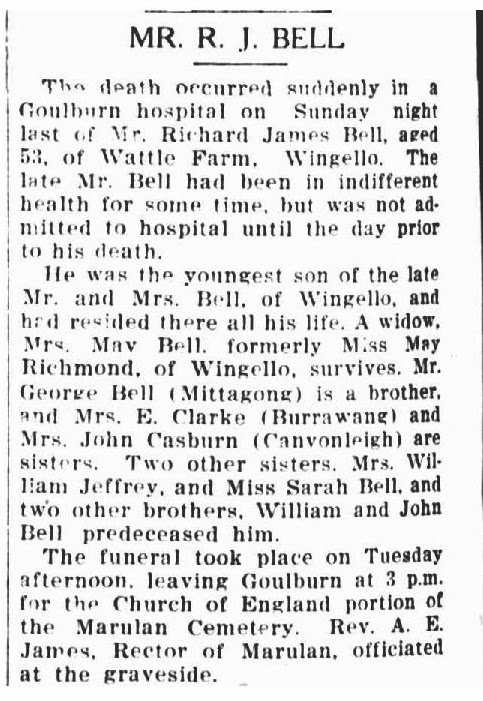 The death occurred suddenly in a Goulburn hospital on Sunday night last of Mr. Richard James Bell, aged 53, of Wattle Farm, Wingello. The late Mr. Bell had been in indifferent health for some time, but was not admitted to hospital until the day prior to his death.  He was the youngest son of the late Mr. and Mrs. Bell, of Wingello, and had resided there all his life. A widow, Mrs. May Bell, formerly Miss May Richmond of Wingello, survives. Mr. George Bell (Mittagong) is a brother, and Mrs. E. Clarke (Burrawang) and Mrs. John Casburn (Canvonleigh) are sisters. Two other sisters, Mrs. William Jeffrey, and Miss Sarah Bell, and two other brothers, William and John Bell predeceased him. The funeral took place on Tuesday afternoon, leaving Goulburn at 3 p.m. for the Church of England portion of the Marulan Cemetery. Rev. A. E. James, Rector of Marulan, officiated at the graveside. 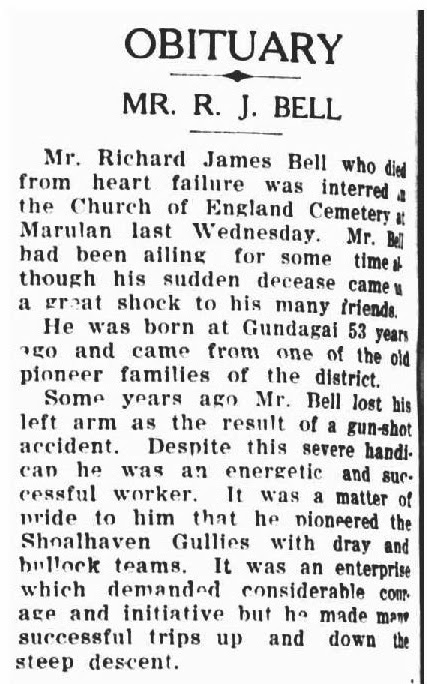 Mr. Richard James Bell who died from heart failure was interred at the Church of England Cemetery at Marulan last Wednesday. Mr Bell had been ailing for some time although his sudden decease came at a great shock to his many friends. He was born at Gundagai 53 years ago and came from one of the old pioneer families of the district. Some years ago Mr. Bell lost his left arm as the result of a gun-shot accident. Despite this severe handicap he was an energetic and successful worker. It was a matter of pride, to him that he pioneered the Shoalhaven Gullies with dray and bullock teams. It was an enterprise which demanded considerable courage and initiative but he made many successful trips up and down the steep descent. 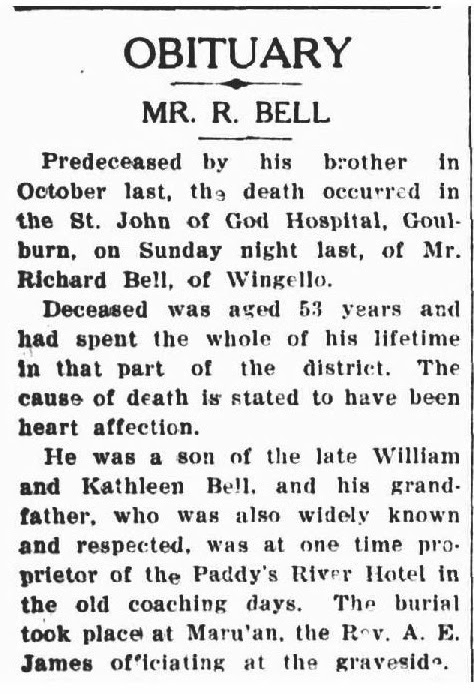 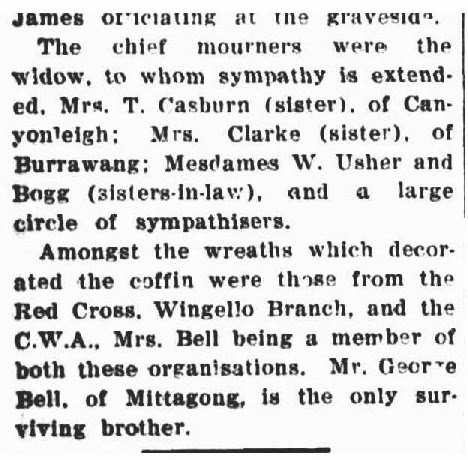 Predeceased by his brother in October last, the death occurred, in the St. John of God Hospital, Goulburn, on Sunday night last, of Mr. Richard Bell, of Wingello. Deceased was aged 53 years and
had spent the whole of his lifetime in that part of the district. The cause of death is stated to have been heart affection.  He was a son of the late William and Kathleen Bell, and his grandfather, who was also widely known and respected, was at one time proprietor of the Paddy's River Hotel in the old coaching days. The burial took place at Marulan, the Rev. A.E. James officiating at the graveside.
The chief mourners were the widow, to whom sympathy is extended, Mrs. T. Casburn (sister), of Can-
yonleigh; Mrs. Clarke (sister), of Burrawang ; Mesdames W. Usher and Bogg (sisters-in-law), and a large circle of sympathisers.  Amongst the wreaths which decorated the coffin were those from the
Red Cross, Wingello Branch, and the C.W.A., Mrs. Bell being a member of both these organisations. Mr. George Bell, of Mittagong, is the only surviving brother.