November 27, 2013
Ethel Florence Boyd who was born in 1890 at Rutherglen, Victoria was the daughter of William Leonard Boyd and his wife Elizabeth (nee Worldon).  My connection to her is that she is my first cousin four times removed.  In 1915 Ethel married Arthur Ernest Warby at St. Thomas' Church of England at Narrandera, New South Wales.  Arthur Ernest Warby was the son of James Edward Warby and his wife Sarah (nee Lakeman).  Tragically Arthur's mother Sarah and sister Amy were murdered at Billenbah in 1911.  In 1919 Arthur and Ethel had a daughter Joan Ethel.  Arthur Ernest Warby died in Sydney in 1921 and Ethel Florence Warby in Victoria in 1980. 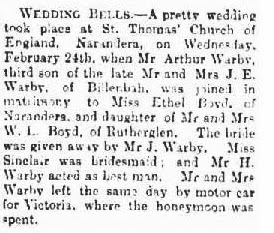 WEDDING BELLS.- A pretty wedding took place at St. Thomas' Church of England, Narandera, on Wednesday, February 24th, when Mr Arthur Warby, third son of the late Mr and Mrs J.E. Warby, of Billlenbah, was joined in matrimony to Miss Ethel Boyd, of Narandera, and daughter of Mr and Mrs W.L. Boyd, of Rutherglen.  The bride was given away by Mr J. Warby, Miss Sinclair was bridesmaid; and Mr H. Warny acted as best man.  Mr and Mrs Warby left the same day by motor car for Victoria, where the honeymoon was spent.