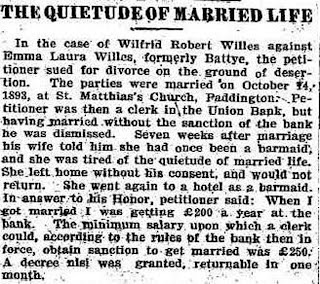 THE QUIETUDE OF MARRIED LIFE

In the case of Wilfred Robert Willes against Emma Laura Willes, formerly Battye, the petitioner sued for divorce on the grounds of desertion.  The parties were married on October 14, 18983, at St. Matthias's Church, Paddington.  Petitioner was then a clerk in the Union Bank, but having married without the sanction of the bank he was dismissed.  Seven weeks after marriage his wife told him she had once been a barmaid, and she was tired of the quietude of married life.  She left home without his consent, and would not return.  She went again to a hotel as a barmaid.  In answer to his Honor, petitioner said: When I got married I was getting £200 a year at the bank.  The minimum salary upon which a clerk could, according to the rules of the bank then in force, obtain sanction to get married was £250.  A decree nisi was granted, returnable in one month. 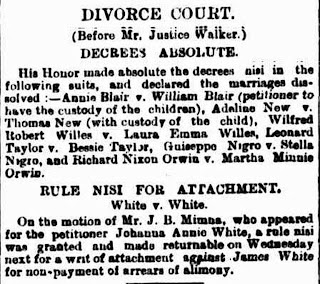 (Before Mr. Justice Walker.)
DECREES ABSOLUTE.
His Honor made absolute the decrees nisi in the following suits, and declared the marriages dissolved :- Annie Blair v. William Blair (petitioner to have custody of the children), Adaline New v. Thomas New (with custody of the child), Wilfred Robert Willes v. Laura Emma Willes, Leonard Taylor v. Bessie Taylor, Guiseppe Nigro v. Stella Nigro, and Richard Nixon Orwin v. Martha Minnie Orwin.
RULE NISI FOR ATTACHMENT.
White v. White.
On the motion of Mr. J.B. Mimns, who appeared for the petitioner Johanna Annie White, a rule nisi was granted and made returnable on Wednesday next for a writ of attachment against James White for non-payment of arrears of alimony.

Wilfred Willes returned to Tasmania and married Eva Isabel Pitt in 1899.  He died in Tasmania in 1904.  In 1912 Emma married Jules Gauharou in Sydney, New South Wales.  She died in 1933 and was buried at Woronora Cemetery.