June 02, 2013
Archibald John Sinclair is my 3rd great grand uncle.  The son of Scottish immigrants William Sinclair and Flora (nee McRae) he was born in New South Wales in 1848. 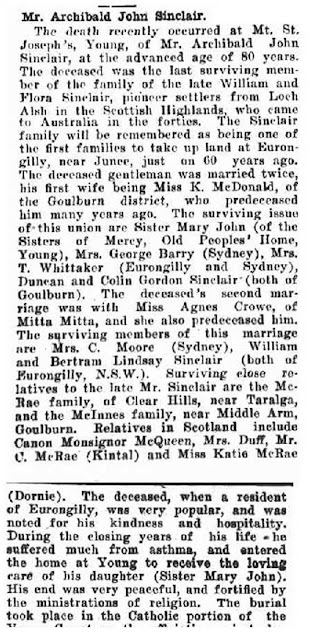 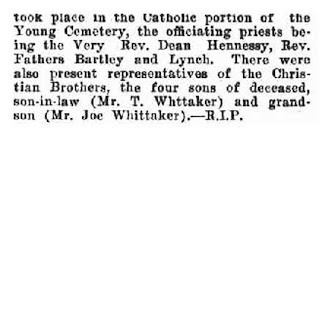 The death recently occurred at Mt. St. Joseph's, Young, of Mr. Archibald John Sinclair, at the advanced age of 80 years.  The deceased was the last surviving member of the family of the late William and Flora Sinclair, pioneer settlers from Loch Alsh in the Scottish Highlands, who came to Australia in the forties.  The Sinclair family will be remembered as being one of the first families to take up land at Eurongilly, near Junee, just on 60 years ago.  The deceased gentleman was married twice, his first wife being Miss K. McDonald, of the Goulburn district, who predeceased him many years ago.  The surviving issue of this union are Sister Mary John (of the Sisters of Mercy, Old People' Home, Young), Mrs. George Barry (Sydney), Mrs. T. Whittaker (Eurongilly and Sydney), Duncan and Colin Gordon Sinclair (both of Goulburn).  The deceased's second marriage was with Miss Agnes Crowe, of Mitta Mitta, and she also predeceased him.  The surviving members of this marriage are Mrs. C. Moore (Sydney), William and Bertram Lindsay Sinclair (both of Eurongilly, N.S.W.).  Surviving close relatives to the late Mr. Sinclair are the McRae family, of Clear Hills, near Taralga, and the McInnes family, near Middle Arm, Goulburn.  Relatives in Scotland include Canon Monsignor McQueen, Mrs. Duff, Mr. C. McRae (Kintal) and Miss Katie McRae (Dornie).  The deceased, when a resident of Eurongilly, was very popular, and was noted for his kindness and hospitality.  During the closing years of his life - he suffered much from asthma, and entered the home at Young to receive the loving care of his daughter (Sister Mary John).  His end was very peaceful, and fortified by the ministrations of religion.  The burial took place in the Catholic portion of the Young Cemetery, the officiating priests being the Very Rev. Dean Hennessy, Rev. Fathers Bartley and Lynch.  There were also present respresentatives of the Christians Brothers, the four sons of the deceased, son-in-law (Mr. T. Whittaker).- R.I.P.

Archibald John Sinclair and his wife Catherine (nee McDonald) had the following children:

Archibald John Sinclair and his wife Agnes (nee Crowe) had the following children: