June 23, 2013
My 3rd Great Grandfather John Albert McDonnell arrived in Australia from Inverness, Scotland on the 10th May 1839 on board the ship Asia with his parents John McDonnell and Ann (nee McDonald) and five siblings.  He married Christina Sinclair in Goulburn in 1867 and they had three known children together. 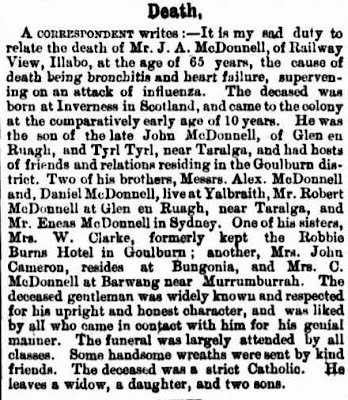 A CORRESPONDENT writes :- It is my sad duty to relate the death of Mr. J.A. McDonnell, of Railway View, Illabo, at the age of 65 years, the cause of death being bronchitis and heart failure, supervening on an attack of influenza.  The deceased was born at Inverness in Scotland, and came to the colony at the comparatively early age of 10 years.  He was the son of the late John McDonnell, of Glen en Ruagh, and Tyrl Tyrl, near Taralga, and had hosts of friends and relations residing in the Goulburn district.  Two of his brothers, Messrs. Alex. McDonnell and, Daniel McDonnell, live at Yalbraith, Mr. Robert McDonnell at Glen en Ruagh, near Taralga, and Mr. Eneas McDonnell in Sydney.  One of his sisters, Mrs. W. Clarke, formerly kept the Robbie Burns Hotel in Goulburn ; another, Mrs. John Cameron, resides at Bungonia, and Mrs. C. McDonnell at Barwang near Murrumburrah.  The deceased gentleman was widely known and respected for his upright and honest character, and was liked by all who came in contact with him for his genial manner.  The funeral was largely attended by all classes.  Some handsome wreaths were sent by kind friends.  The deceased was a strict Catholic.  He leaves a widow, a daughter, and two sons.

John Albert McDonnell and his wife Christina (nee Sinclair) had the following children: