June 18, 2013
These articles involve my 5th Great Grandmother Ann Puckeridge (nee Maund) and her son William Puckeridge (my half 4th Great grand Uncle).  Ann was born in England and married her first husband Joseph Puckeridge around 1796.  There are records of two children being baptised in St Marylebone, Middlesex, England for this couple Sarah (1799-?) and James (1800-?).  Their lives took a turn in 1800, when Joseph was sentenced to death for stealing scotch ticking, this sentence was later remitted to transportation for Life.  In 1801 Joseph, the convict and Ann his free wife arrived in Australia on board the ship Earl Cornwallis, their English born children's fate is unknown.  They went on to have the following children in Australia: William (1802-1877), John (1804-1885), Ann Sawyer nee Puckeridge (1806-1882), Mary Ann (1809-1818), Richard (1812-1881), Joseph (1814-1857) and Henry (1817-1819).   Joseph worked as a brickmaker in Australia and died in Sydney in 1818.  In 1820 Ann married John Sneid/Snead/Sneyd/Sneed (my 5th Great Grandfather) who was a convict transported to Australia on board the ship Hadlow in 1818 and they had the following children Eleanor Bell nee Snead (1820-1889), Richard Sneed (1822-?)  and Mary Baker Sparkes nee Snead (1823-1889).  John died in 1826, leaving Ann a widow yet again with young children dependent on her.  Her life took a turn for the worse after John's death with alcohol playing a major role.  Ann Puckeridge as she was known, died in 1850 and was buried at St Stephens, Newtown. 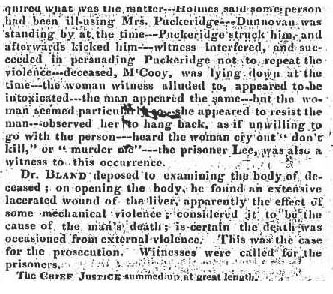 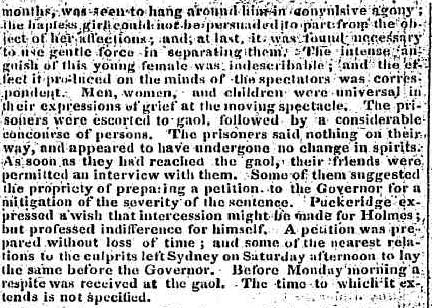 When the prisoners Holmes and Puckeridge were taken from the dock and handcuffed together, the court house yard, through which they had to pass, was a scene of distress, which it perhaps never before presented.  The afflicted partner of Holmes, a young woman of genteel deportment, apparently no more than 18 years of age, and who had been married to her ill-fated husband only two months, was seen to hang around him in convulsive agony ; the hapless girl could not be presuaded to part from the object of her affections ; and at last it was found necessary to use gentle force in separating them.  The intense anguish of this young female was indescribable ; and the effect it produced on the minds of the spectators was correspondent.  Men, woman, and children were universal in their expressions of grief at the moving spectacle.  The prisoners were escorted to gaol, followed by a considerable concourse of persons.  The prisoners said nothing on their way, and appeared to have undergone no change in spirits.  As soon as they had reached the gaol, their friends were permitted an interview with them.  Some of them suggested the propriety of preparing a petition to the Governor for a mitigation of the severity of the sentence.  Puckeridge expressed a wish that intercession might be made for Holmes; but professed indifference for himself.  A petition was prepared without loss of time; and some of the nearest relations to the culprits left Sydney on Saturday afternoon to lay the same before the Governor.  Before Monday morning a respite was received at the gaol.  The time to which it extends is not specified. 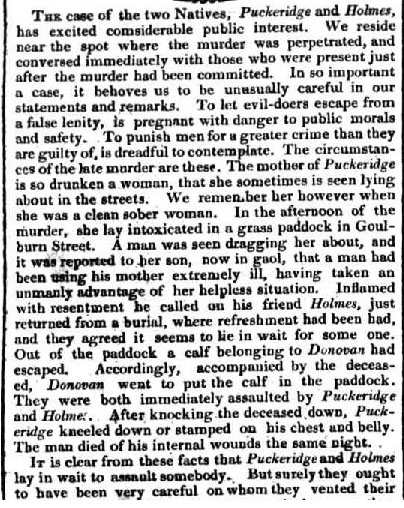 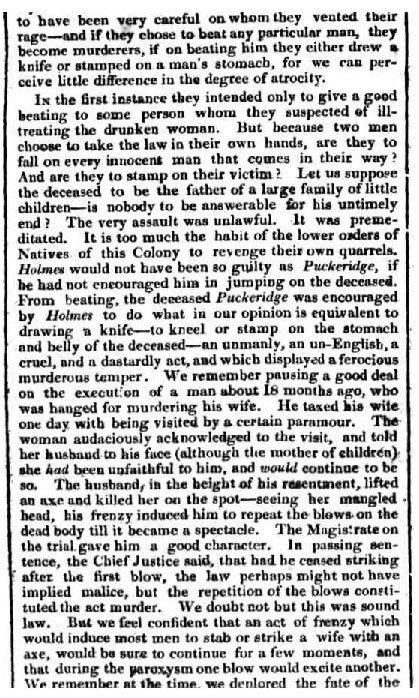 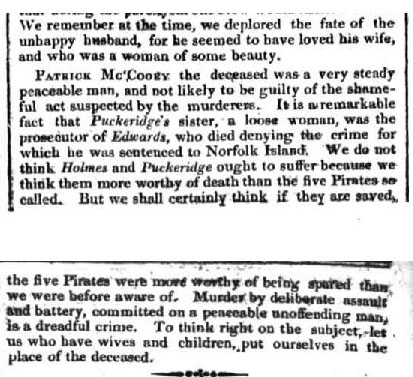 The case of the two Natives; Puckeridge and Holmes, has excited considerable public interest.  We reside near the spot where the murder was perpetrated, and conversed immediately with those who were present just after the murder had been committed.  In so important a case, it behoves us to be unusually careful in our statements and remarks.  To let evil-doers escape from a false lenity, is pregnant with danger to public morals and safety.  To punish men for a greater crime than they are guilty of, is dreadful to contemplate.  The circumstances of the late murder are these.  The mother of Puckeridge is so drunken a woman, that she sometimes is seen lying about in the streets.  We remember her however when she was a clean sober woman.  In the afternoon of the murder, she lay intoxicated in a grass paddock in Goulburn Street.  A man was seen dragging her about, and it was reported to her son, now in gaol, that a man had been using his mother extremely ill, having taken an unmanly advantage of her helpless situation.  Inflamed with resentment he called on his friend Holmes, just returned from a burial, where refreshment had been had, and they agreed it seems to lie in wait for some one. Out of the paddock a calf belonging to Donovan had escaped.  Accordingly, accompanied by the deceased, Donovan went to put the calf in the paddock.  They were both immediately assaulted by Puckeridge and Holmes.  After knocking the deceased down, Puckeridge kneeled down or stamped on his chest and belly.  The man died of his internal wounds the same night.
IT is clear from these facts that Puckeridge and Holmes lay in wait to assault somebody.  But surely they ought to have been very careful on whom they vented their rage - and if they chose to beat any particular man, they become murderers, if on beating him they either drew a knife or stamped on a man's stomach, for we can perceive little difference in the degree of atrocity.
IN the first instance they intended only to give a good beating to some person whom they suspected of ill-treating the drunken woman.  But because two men choose to take the law in their own hands, are they to fall on every innocent man that comes in their way?  And are they to stamp on their victim?  Let us suppose the deceased to be the father of a large family of little children - is nobody to be answerable for his untimely end?  The very assault was unlawful.  It was premeditated.  It is too much the habit of the lower orders of Natives of this Colony to revenge their own quarrels.  Holmes would not have been so guilty as Puckeridge, if he had not encouraged him in jumping on the deceased.  From beating, the deceased Puckeridge was encouraged by Holmes to do what in our opinion is equivalent to drawing a knife - to kneel or stamp on the stomach and belly of the deceased -  an unmanly, an un-English, a cruel, and a dastardly act, and which displayed a ferocious murderous temper.  We remember pausing a good deal on the execution of a man about 18 months ago, who was hanged for murdering his wife.  He taxed his wife one day with being visited by a certain paramour.  The woman audaciously acknowledged to the visit, and told her husband to his face (although the mother of children) she had been unfaithful to him, and would continue to be so.  The husband in the height of his resentment, lifted an axe and killed her on the spot - seeing her mangled head, his frenzy induced him to repeat the blows on the dead body till it became a spectacle.  The Magistrate on the trial gave him a good character.  In passing sentence, the Chief Justice said, that had he ceased striking after the first blow, the law perhaps might not have implied malice, but the repetition of the blows constituted the act murder.  We doubt not but this was sound law.  But we feel confident that an act of frenzy which would induce most men to stab or strike a wife with an axe, would be sure to continue for a few moments, and that during the paroxysm one blow would excite another.  We remember at the time, we deplored the fate of the unhappy husband, for he seemed to have loved his wife, and who was a woman of some beauty.
PATRICK McCOOEY the deceased was a very steady peaceable man, and not likely to be guilty of the shameful act suspected by the murderers.  It is a remarkable fact that Puckeridge's sister, a loose woman, was the prosecutor of Edwards, who died denying the crime for which he was sentenced to Norfolk Island.  We do not think Holmes and Puckeridge ought to suffer because we think them more worthy of death than the five Pirates so called.  But we shall certainly think if they are saved, the fives Pirates were more worthy of being spared than we were before aware of.  Murder by deliberate assault and battery, committed on a peaceable unoffending man, is a dreadful crime.  To think right on the subject, let us who have wives and children, put ourselves in the place of the deceased.

The result of the investigation into the case of Puckeridge and Holmes, convicted for the murder of McCooey, has been a reprieve and conditional commutation, the terms of which we understand to be transportation for seven years to Moreton Bay, or until His Majesty's pleasure be known, the case being referred to England for the opinion of the Twelve Judges. 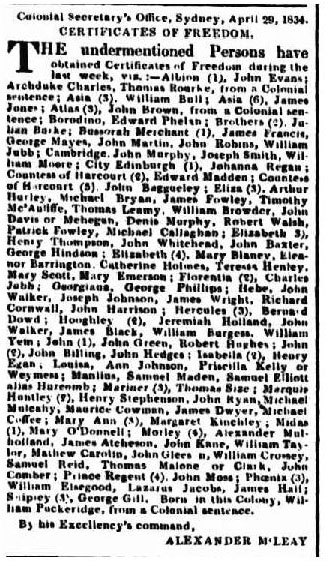 More information on the case can be found at R. v. Puckeridge, Holmes, Sneid and Lee [1827] NSWSupC 17