June 16, 2013
Today's obituary is for my 3rd Great Grand Aunt Amelia Roots (nee Guymer).  The daughter of David Guymer and his wife Marianne (nee Bentley) she was christened on the 15th June 1834 at Great Thurlow in Suffolk, England.  Together with her parents and siblings Amelia came to Australia in 1853 on board the ship Harriett.  In 1856 she married James Flanagan and they had four known children together. After James death in January 1869, Amelia married Thomas Roots in December of the same year.  Thomas died in 1877, while Amelia died in 1925. 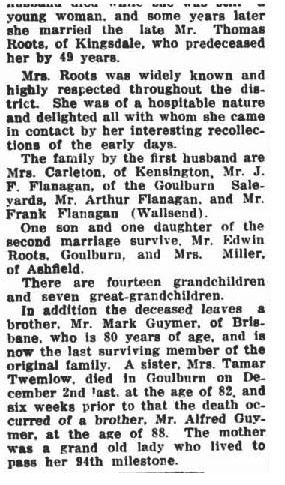 With the passing of Mrs. Amelia Roots, the Goulburn district loses another of its notable pioneers.  She was amongst the early arrivals at Taralga, and her recollections of the town were historical.
The deceased, who was 93 years of age, hed been in failing health for some time past.  She recently contracted a severe cold, and for over a week was confined to bed at the residence of her son, "Roma," Cowper-street, Goulburn.  She died there at 9 a.m. on Sunday.
The late Mrs. Roots was a native of Suffolk (England)m and came to Australia with her parents and brothers and sisters about 75 years ago, reaching Sydney by the ship "Harriet." Her father was the late Mr. David Guymer, a sturdy pioneer of the south.
The family travelled to Taralga via Camden per bullock dray.  They camped for about a week at Camden, where they were hospitably entertained by the Macarthurs and others.  On continuing their journey, which was not without its adventurous side, they had numerous delays and mishaps owing to bad roads, and eventually reached Richlands, where they took up their residence.
The late Mrs. Roots was married at a comparatively early age to the late Mr. James Flanagan, and came to live at Kingsdale, where she resided until about 19 years ago.  Her first husband died while she was still a young woman, and some years later she married the late Mr. Thomas Roots, of Kingsdale, who predeceased her by 49 years.
Mrs. Roots was widely known and highly respected throughout the district.  She was of a hospitable nature and delighted all with whom she came in contact by her interesting recollections of the early days.
The family by the first husband are Mrs. Carleton, of Kensington, Mr. J. F. Flanagan, of the Goulburn Saleyards, Mr. Arthur Flanagan, and Mr. Frank Flanagan (Wallsend).
One son and one daughter of the second marriage survive.  Mr. Edwin Roots, Goulburn, and Mrs. Miller, of Ashfield.
There are fourteen grandchildren and seven great-grandchildren.
In addition the deceased leaves a brother, Mr. Mark Guymer, of Brisbane, who is 80 years of age, and is now the last surviving member of the original family.  A sister, Mrs. Tamar Twemlow, died in Goulburn on December 2nd last, at the age of 82, and six weeks prior to that the death occureed of a brother. Mr. Alfred Guymer, at the age of 88.  The mother was a grand old lady who lived to pass her 94th milestone.

James Flanagan and his wife Amelia (nee Guymer) had the following children:

Thomas Roots and his wife Amelia (formerly Flanagan nee Guymer) had the following children together: