Trove Tuesday - Bitten by a Snake

May 07, 2013
I am a huge fan of Trove it is a wonderful research resource and is very much a national treasure! For my first Trove Tuesday post I have selected an article involving a snake bite. 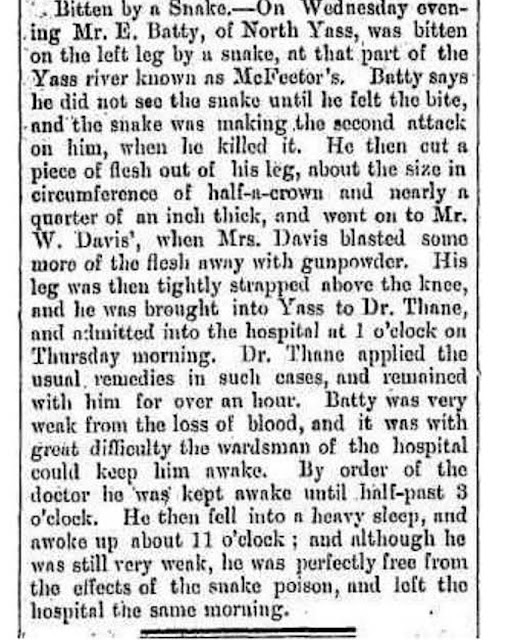 Bitten by a Snake.- On Wednesday evening Mr. E. Batty, of North Yass, was bitten on the left leg by a snake, at that part of the Yass river known as McFeetor's.  Batty says he did not see the snake until he felt the bite, and the snake was making the second attack on him when he killed it.  He then cut a piece of flesh out of his leg, about the size in circumference of half-a-crown and nearly a quarter of an inch thick, and went on to Mr. W. Davis', when Mrs. Davis blasted some more of the flesh away with gunpowder.  His leg was then tightly strapped above the knee, and he was brought into Yass to Dr. Thane, and admitted into the hospital at 1 o'clock on Thursday morning.  Dr. Thane applied the usual remedies in such cases, and remained with him for over an hour.  Batty was very weak from the loss of blood, and it was with great difficultly the wardsman of the hospital could keep him awake.  By order of the doctor he was kept awake until half-past 3 o'clock.  He then fell into a heavy sleep, and awoke up about 11 o'clock ; and although he was still very weak, he was perfectly free from the effects of the snake poison, and left the hospital the same morning.


My Great Great Grandfather Edward Batty and his father Edmund were both E. Batty's living in Yass around this time and while I cannot yet prove it is either of them the story resonated with me due to my own history.  As a child I was bitten by a brown snake and the story was reported in the newspapers also.  Luckily for me I had a wonderful faithful dog, a quick thinking mother and much better treatment options than was available at the time of the Trove article. 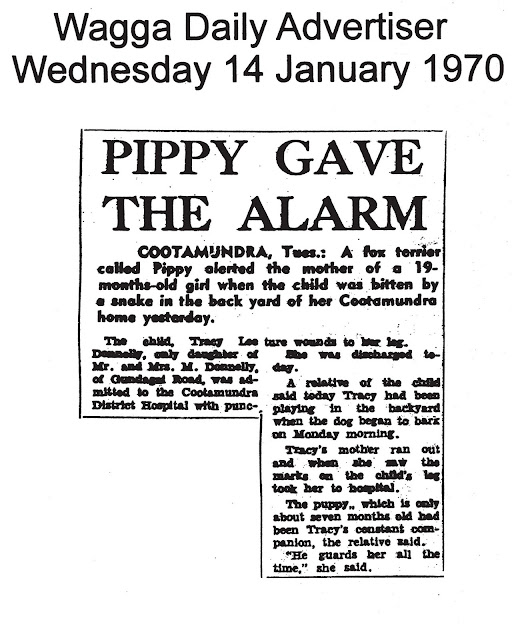 COOTAMUNDRA, Tues.: A fox terrier called Pippy alerted the mother of a 19 months-old girl when the child was bitten by a snake in the back yard of her Cootamundra home yesterday.
The child, Tracy Lee Donnelly, only daughter of Mr. and Mrs. M. Donnelly of Gundagai Road, was admitted to the Cootamundra District Hospital with puncture wounds to her leg.
A relative of the child said today Tracy had been playing in the backyard when the dog began to bark on Monday morning.
Tracy's mother ran out and when she saw the marks on the child's leg took her to hospital.
The puppy, which is only seven months old had been Tracy's constant companion, the relative said.
'He guards her all the time." she said.

Pippy lived for seventeen years, most of them spent happily living with my Grandparents, but he was always my special dog.