May 24, 2013
James Harvey Murray is my husbands Great Grandfather and prior to my research we only had the barest of details and a few family stories about him.  We had heard that he was smuggled out of Ireland with the assistance of Catholic priests after shooting someone.  We were also informed that he was a very large violent man who had done very well for himself in business (something to do with cinemas) after his arrival in Asia, and that he lived with his part Japanese wife and daughters in a large house in Singapore. At some stage his business interests supposedly suffered a down turn but the family remained comfortable. It was not known when he died but it was supposed to be some time before the Second World War.
He is proving to be quite an interesting character to research.  Definitely a family black sheep and not the nicest person to have ever lived, but people come in all shapes, sizes and character types and I am not interested in judging them.  I still have a lot of research about him to do but I have made some interesting finds about him so far.
First he didn't die before the war at all.  Through the Commonwealth War Graves Commission website I found the following record for him: 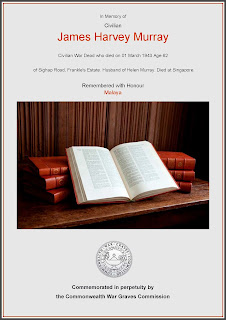 
Second using US Passport Application records found on Ancestry I found out that he claimed to have been born on the 3rd June 1876 in New York to US naturalised Irish parents whose whereabouts he was unaware of in 1917 and that his occupation was advertising.  He claimed to have left the United States in 1899 and stated that he intended to return there within the next eighteen months.  A native United States citizen Walter Palmer Rutledge provided identification for him and stated that he had known him for twelve years.  The bonus of these records is an attached photograph.

According to his passport application he was:
Height:  6 feet tall
Eyes: Blue
Hair: Light brown
With a medium forehead, square chin, normal nose, full face, moustache and he had a florid complexion.
After granting him an emergency passport on the 10th August 1917 in Singapore, his permanent passport was approved in Washington on 5th November 1917.

The National Library of Singapore and their online Newspaper Archive have provided me with lots of leads and information about him. Some articles of interest involving him are:

His reputation as a violent man seems to be beyond doubt!

'The reason why they did not return to the house was because master had a terrible temper and kept a gun in the house.'

'In reply to the Court witness said he stayed away all this time because his master had a very bad temper and a gun. He might have shot witness in his rage.'

'There was a scuffle and Mr. Murray admitted that he hit the accused.'

'Some time ago, Mr. Murray, contractor at the Kallang Tunnel works, who lives in Syed Ally Road, was robbed of a considerable quantity of valuable jewellery.'

'Asked by Mr. Guant where his witnesses were, prosecutor stated that they would not come up; they were afraid of Mr. Murray.  There was one man whose head defendant smashed because he would not lend him $5.'
The Singapore Free Press and Mercantile Advertiser (1884-1942), 25 November 1910, Page 8

SCENE IN THE ARCADE.

'Defendant told him to "shut up" or he would "hammer" him.'

'The magistrate said that he was of the opinion that the assault was more violent than was sometimes necessary and imposed a fine of $10 on the first charge.'

Changing citizenship -What happened to returning to the United States?

'Mr James Harvey Murray, a native of New York, is granted a certification of naturalisation.'

'J.H. Murray, the proprietor of the Singapore and Straits Billposting and Advertising Co.'

'Mr J.H. Murray has been discharged from hospital and is back again in his office in the Arcade.'

'At the Cathedral of the Good Shepherd on Saturday morning, the marriage was quietly celebrated of Miss Helen de Stillfried Ratinez to Mr. J.H. Murray, the well-known local contractor, who is at present carrying out contract work for the T.P.D. at Keppel Harbour. Rev Father Rivet was officiating clergyman at the wedding ceremony.  The Wedding breakfast was held at 'The Towers' Spottiswoode.'

A point of interest is that my husband has always been told that an Austrian Baron fell in love with a Japanese Princess (Geisha?). After finding this marriage notice and finding out Helen's surname, I did some research and found out that it is highly likely that she is one of Baron Raimund Von Stillfried-Rathenitz three half Japanese daughters.  Meaning that there are grains truth in some family stories after all.  This is very much an open case, as I am still waiting for more details from a researcher who I sent my information to.  I will add any updates regarding Helen and her parentage to my blog as they arise!


Kathleen Murray (1909-1919) had been previously unrecorded in the details that we had about this family, thankfully she is now back in the family history records.

'A sad occurrence took place on board the Ipoh on the voyage from Penang to Singapore, Miss Kathleen Murray, the second daughter, age 10, of  Mr. and Mrs. J.H. Murray of Singapore, succumbing to an attack of dyspeoa , consequent on a badly ulcerated throat. The deceased had been ill in the Penang Convent, where she was a resident scholar along with her three sisters, and her mother went to Penang to bring her back home. Much sympathy will be extended to the parents in their bereavement. The funeral took place this morning. Mr. and Mrs. Murray desire to thank their numerous sympathisers and those attending the funeral and sending wreaths.'

I still have many questions about him.  Was he really from New York? Could he have been involved in the New York gangs? Who were his parents? How did he die? How did such a violent man deal with being a prisoner of war? What were his business dealings and was he involved in the shady side of the cinema business and prostitution? The research continues and I look forward to finding out more about him.