May 19, 2013
My 3x Great Grandmother Bridget Cooney was born c.1827 in Ireland, the daughter of William and Jane Sheridan.  After leaving her parents in Convoy, Donegal, Ireland she arrived in Australia on 9 September 1850 on board the ship Emily with her first husband James Henderson. James Henderson was born c.1820 in Ireland, the son of Hugh and Isabella Henderson.  His native place was also Convoy, Donegal and according to documentation his parents were both deceased by the time he left for Australia in 1850. Unfortunately James died on 22nd January 1859 leaving Bridget with a young family to support, he was buried in the General Cemetery at Jugiong, New South Wales.  In 1865 Bridget married the widower Owen Cooney, a native of Cavan, Ireland, he died on 21 November 1899.  Bridget died on the 20 October 1904 and was buried in the Catholic section of Jugiong Cemetery with her daughter Martha McAlister nee Henderson and son John Henderson.
. 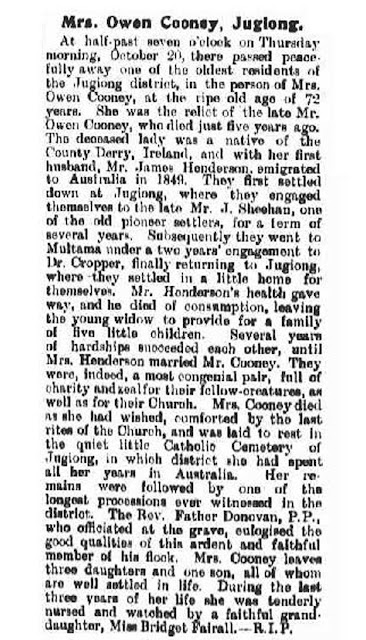 At half-past seven o'clock on Thursday morning, October 20, there passed peacefully away one of the oldest residents of the Jugiong district, in the person of Mrs. Owen Cooney, at the ripe old age of 72 years.  She was the relict of the late Mr. Owen Cooney, who died just five years ago.  The deceased lady was a native of the County Derr, Ireland, and with her first husband, Mr. James Henderson, emigrated to Australia in 1849.  They first settled down at Jugiong, where they engaged themselves to the late Mr. J. Sheehan, one of the old pioneer settlers, for a term of several years.  Subsequently they went to Muttama under a two year engagement to Dr. Cropper, finally returning to Jugiong, where they settled in a little home for themselves.  Mr Henderson's health gave way, and he died of consumption, leaving the young widow to provide for a family of five little children.  Several years of hardships succeeded each other, until Mrs. Henderson married Mr. Cooney.  They were, indeed, a most congenial pair, full of charity and zeal for their fellow-creatures, as well as for their Church.  Mrs. Cooney died as she had wished, comforted by the last rites of the Church, and was lain to rest in the quiet little Catholic Cemetery of Jugiong, in which district she had spent all her years in Australia.  Her remains were followed by one of the longest processions ever witnessed in the district.  The Rev. Father Donovan, P.P., who officiated at the grave, eulogised the good qualities of this ardent and faithful member of his flock.  Mrs. Cooney leaves three daughters and one son, all of whom are well settled in life.  During the last three years of her life she was tenderly nursed and watched by a faithful granddaughter, Miss Bridget Fairall. - R.I.P. 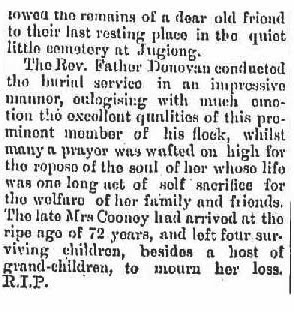 Early on Thursday morning, 20th inst. (writes our Jugiong correspondent) there passed peacefully away the spirit of one of the very oldest residents of this locality in the person of Mrs Owen Cooney, of Reedy Creek, after a very brief illness. The deceased lady, with her first husband, the late Mr. James Henderson, were natives of the County Derry, North of Ireland, and emigrated to Australia over 50 years ago. Soon after arrival they became associated with the hardy bands of pioneer settlers, who were busily engaged in the arduous task of opening up the interior of New South Wales. The young couple first settled somewhere in the vicinity of Muttama, but soon after moved on to Jugiong, where they established a permanent home. Mr and Mrs Henderson experienced somewhat more than a fair share of the vicissitudes of that stirring period, which eventually undermined the health, and brought to an early close the life of the husband, and left the brave and stout-hearted widow to carry on the battle of life alone — with a young family of five children to provide for. And never for a moment did the young widow falter in her noble resolve to do her duty in the path of life destiny had marked out for her to follow. Several years of a strenuous struggle for existence succeeded, during which the frowns or smiles of fortune were met with the unruffled composure of a dauntless heart, when she afterwards married the late Mr Owen Cooney — a gentleman whose character for high principle, allied to the most lovable qualities of human nature,will be held in honor by the community as long as the little village of Jugiong exists. Mr Cooney, who was, at the time this marriage took place, himself a widower, with an equal number of children, predeceased his consort within a month of five years, but had fortunately amassed sufficient of this world's goods to be able to leave Mrs Cooney in comfortable circumstances during the brief remainder of her second widowhood. The deceased lady was of a most
kindly disposition, large-hearted, and charitable almost to a fault. Scores of hungry swagmen, toiling hopelessly along the rugged pathways of life,had occasion to bless the kindly fate that guided their wandering footstepsto her hospitable door. The late Mrs. Cooney was a leading member of the R.C. Church, and no call by the local clergy ever failed to meet with a generous response from her. liberal purse. And she died as she would have wished, fortified by the last solemn rites of the church she loved on earth so well. The funeral took place on Saturday last, when one of the longest and most imposing processions ever witnessed in this district sadly followed the remains of a dear old friend to their last resting place in the quiet little cemetery at Jugiong. The Rev. Father Donovan conducted the burial service in an impressive manner, eulogising with much emotion the excellent qualities of this prominent member of his flock, whilst many a prayer was wafted on high for the repose of the soul of her whose life was one long act of self sacrifice for the welfare of her family and friends. The late Mrs Cooney had arrived at the ripe age of 72 years, and left four, surviving children, besides a host of grand-children, to mourn her loss.

Mrs Owen Cooney, an old resident of Jugiong, aged 80, died to-day.  The deceased leaves numerous descendants.  She was one of the first white women in the district. 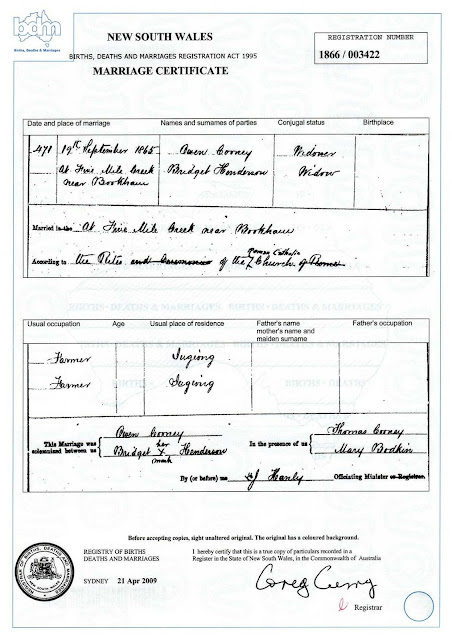