I came across this article on Trove from The Goulburn Herald dated 16th February, 1850 while researching my 4th Great Grand Aunt Mary Beaver (nee Rhall) who with her husband Charles Beaver went to California on board the ship Louisa in 1849. Although according to this article they were doing well in California, they soon returned to Australia due to the death of Charles father William who had an undertakers business in Sydney. 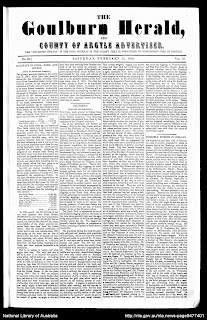 
The article contains a wealth of information for researchers but it is the story of the misfortune of Byrnes and Frazer that for me appealed the most.

' It is worthy of remark that at the Capital, notwithstanding the superfluity of wealth there were many persons in the most abject poverty, ashamed to beg, and unable to stand the fatigue of labour which requires the exercise of physical strength; men who had received an education fitting them to fill superior offices but whose services cannot be required in California for years to come.-Our inform ant had met several of these unfortunate persons of this class, who went from New South Wales and Van Diemen's land, and who could meet with no engagement by which they could earn a livelihood, and who found much difficulty in getting even their daily bread. Two men named Byrnes, a brick-maker, and Frazer, both from Sydney by some of the first fleet of vessels, had accumulated at the diggings, where they had laboured hard, about seventeen and a-half pounds of gold dust, with which they took their departure on their way to San Francisco, where they purpose taking ship for this colony to see their friends and again return to California. Rumours that robberies were common on the road induced them to pack their metal into a leather bag which they placed in an apparent careless manner in a dirty handkerchief, which was suffered to dangle at the back of the dray in order to allay suspicion, should they meet with rough customers on the road. They met with no molestation on their journey, but when approaching their destination, they discovered that their precious bag had sprung a leak, and with the jolting motion of the carriage the dust had escaped through the covering, and had scarcely as much remaining as would meet the expenses of their expedition. They were seen in San Francisco very much depressed by their disastrous misfortune. Frazer looked on the matter with an affected air of indifference, which was so badly acted, as to become almost as ludicrous as Byrne's extravagant exhibition of sorrow; but a few days residence in the city gave them fresh courage, and bundling their knapsacks on their backs, they started for the diggings, where they were again successfully located when our informant last heard of them.' 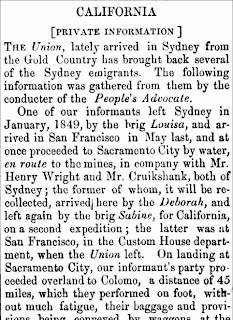 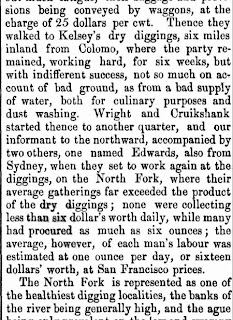 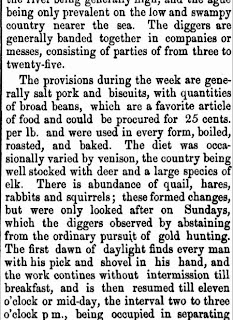 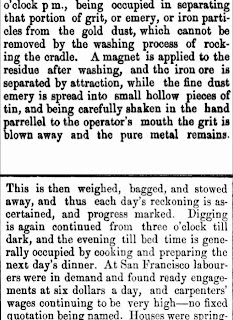 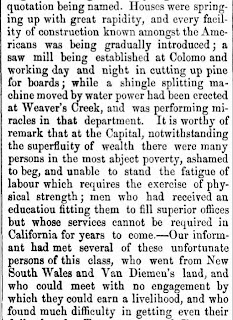 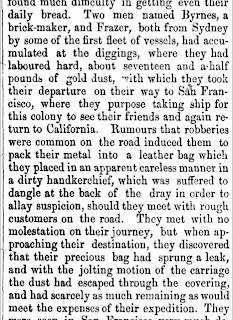 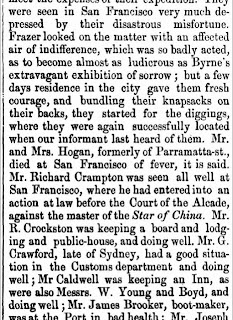 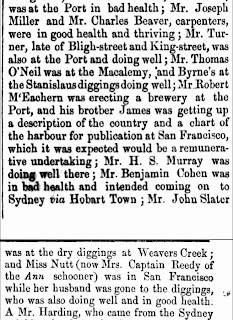 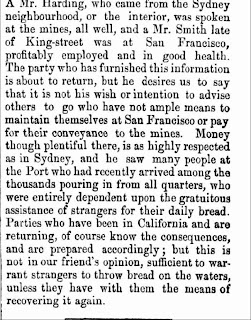