My Great Grand Aunts Laura and Clara Stevens/Stephens were the twin daughters of Thomas Stevens and his wife Jane (nee Henderson).  According to the 1998 published 'Stevens Family History' the girls were baptised on the 23rd November 1886 at Adjungbilly, in the Catholic Parish of Gundagai.  Apparently Laura was recorded as Stevens and Clara as Stephens (Thomas was known to use both)  Maybe on that day they couldn't decide which was more appropriate!  The official family history contained few other details about them, believing that Laura had died at a very early age and Clara had married and moved away from the family.

The only records I can find for a Laura Stevens/Stephens born c.1886 are the following: 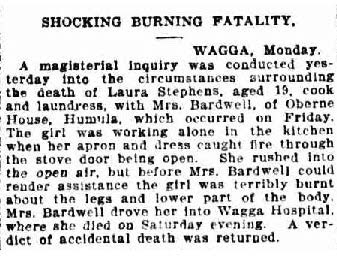 A magisterial inquiry was conducted yesterday into the circumstances surrounding the death of Laura Stephens, aged 19, cook and laundress, with Mrs. Bardwell, of Oberne House, Humula, which occurred on Friday.  The girl was working alone in the kitchen when her apron and dress caught fire through the stove door being open.  She rushed into the open air, but before Mrs. Bardwell could render assistance the girl was terribly burnt about the legs and lower part of the body.  Mrs. Bardwell drove her into Wagga Hospital, where she died on Saturday evening.  A verdict of accidental death was returned. 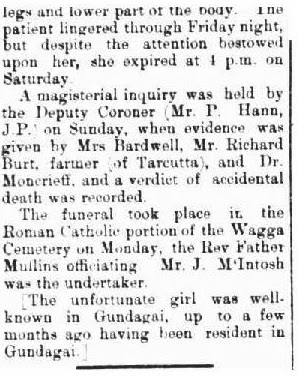 BURNT TO DEATH.
SHOCKING FATE OF AN EX-GUNDAGAI GIRL.

A shocking accident occurred on Friday, 21st December, when Laura Stephens, aged 19, a cook and laundress employed at Mrs Bardwell's sustained fatal injuries while preparing dinner.
It appears that at 11 o'clock on Friday morning the unfortunate girl was working in the kitchen of Oberne House.  Mrs. Bardwell, who was in a room upstairs, heard cries of distress coming from the kitchen, and on looking over the balcony she saw the girl running out of the kitchen with her dress and petticoat in flames.  Mrs Bardwell hurried downstairs, wrapped a rug round deceased, and exinguished the flames.  It was then seen that the girl was severely burnt.  She told Mrs Bardwell that she was lifting the saucepan off the stove, when her apron and her dress caught fire from the door of the stove, which was open.  A conveyance was procured with all possible speed, and driven by Mr. Burt to the Wagga Hospital, Mrs Bardwell being also in the vehicle looking after the patient.  Dr. Moncrieff was called to attend to the girl, and he found her suffering from profound shock and severe burns on the legs and lower part of the body.  The patient lingered through Friday night, but despite the attention bestowed upon her, she expired at 4 p.m. on Saturday.
A magisterial inquiry was held by the Deputy Coroner (MR. P. Hann, J.P..) on Sunday, when evidence was given by Mrs Bardwell, Mr. Richard Burt, farmer of Tarcutta), and Dr. Moncrieff, and a verdict of accidental death was recorded.
The funeral took place at, the Roman Catholic portion of the Wagga Cemetery on Monday, the Rev. Father Mullins officiating Mr. J. McIntosh was the undertaker.
The unfortunate girl was well-known in Gundagai, up to a few months ago having been resident in Gundagai. 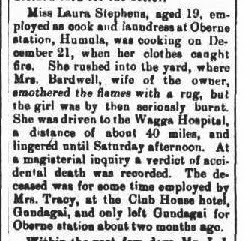 Miss Laura Stephens, aged 19, employed as cook and laundress at Oberne station, Humula, was cooking on December 21, when her clothes caught fire.  She rushed into the yard, where Mrs. Bardwell, wife of the owner, smothered the flames with a rug, but the girl was by then seriously burnt.  She was driven to the Wagga Hospital, a distance of about 40 miles, and lingered until Saturday afternoon.  At a magisterial inquiry a verdict of accidental death was recorded.  The deceased was for some time employed by Mrs. Tracy, at the Club House hotel, Gundagai, and only left Gundagai for Oberne station about two months ago.

The tragic end of an ex-Coolac girl, Miss Laura Stevens, who was burned to death at Oberne last week, came as a shock.  Her brothers and sister heard the news too late to be able to get to the funeral. 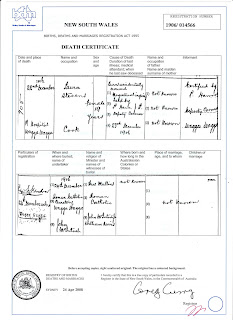 Is she our Laura?  While I believe it is likely, unfortunately I cannot say for sure.  I was hoping her death certificate would prove it one way or the other but as the Deputy Coroner was the informant and not a family member the details are lacking.  The research continues and I am hopeful that an answer will be found one day.

From further investigation I found that Clara Mary Stevens had married Robert Colbert at Cootamundra, New South Wales in 1911.  Robert was a blacksmith by trade and after their marriage the young couple moved to Tallangatta in Victoria.  Things did not go smoothly for the young couple, they lost their first daughter Mary in 1911, followed by their twins in 1913 and in 1914 Robert was declared insolvent. Their surviving son Robert Colbert was born in 1914 and daughter Stella Verdun Dempsey (nee Colbert) in 1916.  Robert Colbert died in 1972 and Clara died in 1974 they were both buried in the Springvale Botanical Cemetery Victoria. 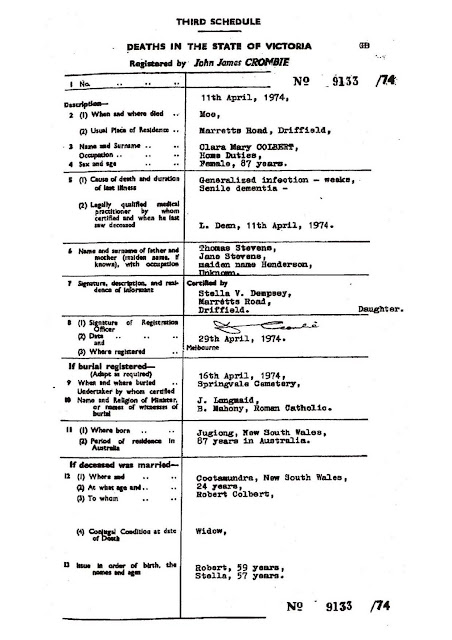 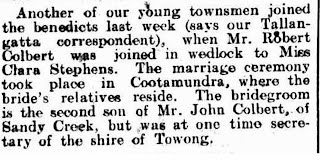 Another of our young townsmen joined the benedicts last week (says our Tallangatta correspondent), when Mr. Robert Colbert was joined in wedlock to Miss Clara Stephens.  The marriage ceremony took place in Cootamundra, where the bride's relatives reside.  The bridegroom is the second son of Mr. John Colbert, of Sandy Creek, but was at one time secretary of the shire of Towong. 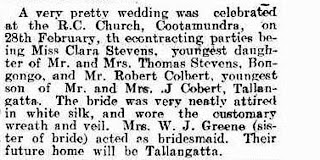 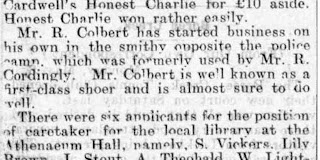 Mr. R. Colbert has started business on his own in the smithy opposite the police camp, which was formerly used by Mr. R. Cordingly.  Mr. Colbert is well known as a first class shoer and is almost sure to do well. 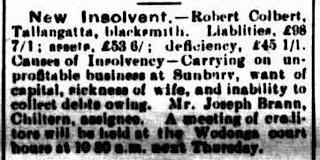 New Insolvent.- Robert Colbert, Tallangatta, blacksmith.  Liabilities, £98 7/1 ; assets £53 6/ ; deficiency, £45 1/1.  Causes of Insolvency-Carrying on unprofitable business at Sunbury, want of capital, sickness of wife, and inability to collect debts owing.  Mr. Joseph Brann, Chiltern, assignee.  A meeting of creditors will be held at the Wodonga court house at 1030 a.m. next Thursday. 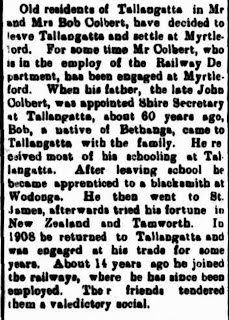 Old residents of Tallangatta in Mr and Mrs Bob Colbert, have decided to leave Tallangatta and settle at Myrtleford.  For some time Mr Colbert, who is in the employ of the Railway Department, has been engaged at Myrtleford.  When his father, the late John Colbert, was appointed Shire Secretary at Tallangatta, about 60 years ago, Bob, a native of Bethanga, came to Tallangatta with the family.  He received most of his schooling at Tallangatta.  After leaving school be became apprenticed to a blacksmith at Wodonga.  He then went to St. James, afterwards tried his fortune in New Zealand and Tamworth.  In 1908 be returned to Tallangatta and was engaged at his trade for some years.  About 14 years ago he joined the railways, where he has since been employed.  Their friends tendered them a valedictory social.