May 14, 2013
One of the family stories that my father told me about his family involved his Uncle Harold O'Connor.  According to family legend, during the First World War my Great Grandfather Michael O'Connor had forbidden his sons to enlist, as he was anti-British and did not want them fighting for the King.  This position apparently caused more than a few issues for them with other community members and there was mention of white feathers being received.
Things took a turn in 1917 when one of the boys, Harold O'Connor was arrested for assaulting a recruiting officer in Cobar and was subsequently committed for trial.  His arrest was reported in the Gilgandra Weekly Newspaper (see article below) and also in the: 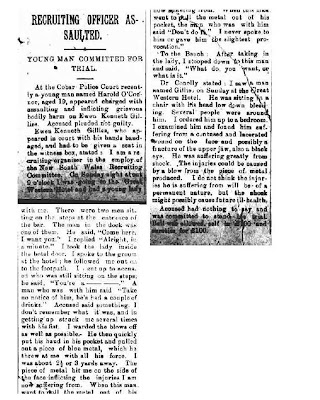 
At the Cobar Police Court recently a young man named Harold O'Connor, aged 19, appeared charged with assaulting and inflicting grievous bodily harm on Ewen Kenneth Gillies.  Accused pleaded not guilty.
Ewen Kenneth Gillies, who appeared in court with his hands bandaged, and had to be given a seat in the witness box, stated: I am a recruiting organiser in the employ of the New South Wales Recruiting Committee.  On Sunday night about 9 o'clock I was going to the Great Western Hotel and had a young lady with me.  There were two men sitting on the steps at the entrance of the bar.  The man in the dock was one of them.  He said, "Come here, I want you."  I replied "Alright, in a minute."  I took the lady inside the hotel door.  I spoke to the groom at the hotel ; he followed me out on to the footpath.  I went up to accused who was still sitting on the steps; he said, "You're a _____________."  A man who was with him said "Take no notice of him, he's had a couple of drinks."  Accused said something.  I don't remember what it was, and in getting up struck me several times with his fist.  I warded the blows off as well as possible.  He then quickly put his hand in his pocket and pulled out a piece of blue metal, which he threw at me with all his force.  I was about 2 1/2 or 3 yards away.  The piece of metal hit me on the side of the face inflicting the injuries I an now suffering from.  When this man went to pull the metal out of his pocket, the man who was with him said "Don't do it."  I never spoke to him or gave him the slightest provocation."
To the Bench : After taking in the lady, I stooped down to this man and said, "What do you want, or what is it."
Dr Connelly stated : I saw a man named Gillies on Sunday at the Great Western Hotel.  He was sitting in a chair with his head low down bleeding.  Several people were around him.  I ordered him up to a bedroom.  I examined him and found him suffering from a contused and lacerated wound on the face and possibly a fracture of the upper jaw, also a black eye.  He was suffering greatly from shock.  The injuries could be caused by a blow from the piece of metal produced.  I do not think the injuries he is suffering from will be of a permanent nature, but the shock might possibly cause future ill-health.
Accused had nothing to say and was committed to stand his trial.  Bail was allowed, self in £100 and sureties for £100.


His trial was held at the Cobar Quarter Sessions, 21 May 1917 and concluded with his acquittal.  According to my father, during the trial the bandaged Mr Ewen Kenneth Gillies was asked to reveal his injuries to the court.  Upon removal of said bandages no injuries were able to be seen and my Great Uncle Harold walked free from the court. At present I cannot find an article to prove these events, I guess it did not make as good copy as an Australian Irish Catholic boy assaulting a recruiting officer at the time. However his acquittal was reported in:

Harold O'Connor passed away in Bourke, New South Wales, Australia in 1971 and sadly my father passed away last year before I found these documents.