February 12, 2019
I was researching the descendants of my 3rd Great Grandfather Joseph Dolphin Jones (see more here) and came across this story on Trove involving some of my second cousins twice removed (some of the Quigg girls in the story) through this line.

When a launch caught fire and capsized under Como Bridge last night, 30 passengers leaped into the water, but all were rescued with the exception of Kressler Nicholas, of Nicholas-street, Campsie, who is believed to have been drowned.
The launch was owned by a man named Anderson, of Rawson-street, Sans Souci, and it had been hired by a party for a moonlight excursion.  It left Sans Souci shortly after 8 p.m. for Picnic Point, near Lugarno, and was passing under the bridge, about 9 p.m., when there was an explosion in the engine.
Most of the occupants were youths and girls, and there was a panic on board.  Despite the efforts of the passengers the flames gained hold, and the launch, which was about 20 feet long, gradually sank.  It lurched to the side, and everyone leaped overboard.
Launch Sinks
The cries of the struggling people brought other craft to their aid, and one by one, they were hauled on board.
When a hurried roll-call was taken, it was found that Nicholas was missing.  Sergeant McNeil and Constable McNamara, of Sutherland, commenced dragging operations, but no body had been found at 2 o'clock this morning.
The rescued people were rushed by cars to the Kogorah Police Station, where efforts were made to obtain clothing for them.
Some of the party were: -
Linda, Hilda, Beryl, and Verlie Quigg, of Canonbury-road, Campsie; Ivy Quigg, Layton-street, Camperdown; Hazel Hayden, Hill-street, Campsie; May Quinn, Victoria-street, Long Bay; Ivy Parkinson, Ninth-avenue, Campsie; Alice and Patricia McCarthy, Broughton-street, Canterbury; Colin Campbell, Highclere-avenue, Punchbowl; Dolly Hellbourne, Fraser-street, Marrickville; Keith Hitchen, Charlotte-street, Campsie; Jean Clough, Imbrees-avenue, Earlwood; Piers Holmes, Milton-street, Lilyfield; Cliff Nicholas, Nicholas-street, Campsie.

Transcript:
No Trace of Body.
Searchers yesterday failed to find the body of Kressler Nicholas (18), drowned on Saturday night at Como. Again to-day the river will be dragged. 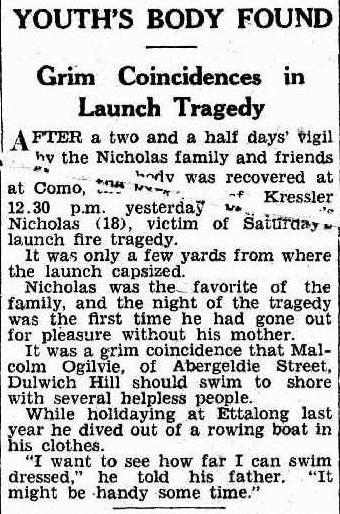 AFTER a two and a half days' vigil by the Nicholas family and friends, at Como, the body was recovered at 12.30 p.m. yesterday of Kressler Nicholas (18), victim of Saturday's launch fire tragedy.
It was only a few yards from where the launch capsized.
Nicholas was the favourite of the family, and the night if the tragedy was the first time he had gone out for pleasure without his mother.
It was a grim coincidence that Malcolm Ogilvie, of Abergeldie Street, Dulwich Hill should swim to shore with several helpless people.
While holidaying at Ettalong last year he dived out of a rowing boat in his clothes.
'I want to see how far I can swim dress," he told his father.  "It might be handy some time."