February 15, 2019
My 1st cousin 3 times removed Ada Amelia Quigg nee Guymer was buried on Monday the 28th June 1937 at the Methodist Cemetery, Moorefield (see here and here).  Ada was born in 1879 the daughter of James Alfred Guymer and his wife Hannah Dolphin nee Jones (see more here and here).  In 1892 tragedy struck with first Hannah and then James dying within days of each other leaving Ada an orphan (see here).  In 1908 she married John O'Hara Quigg and together they had a large family.  Ada died on the 27th June 1937 at her residence 274 Canterbury road, Campsie. 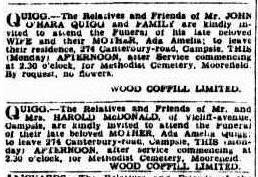 Source: Family Notices (1937, June 28). The Sydney Morning Herald (NSW : 1842 - 1954), p. 7. Retrieved from http://nla.gov.au/nla.news-article17384963
Transcript:
QUIGG.- The Relatives and friends of Mr. JOHN O'HARA QUIGG and FAMILY are kindly invited to attend the Funeral of his late beloved WIFE and their MOTHER, Ada Amelia; to leave their residence 274 Canterbury-road, Campsie, THIS (Monday) AFTERNOON, after Service commencing at 2.30 o'clock, for Methodist Cemetery, Moorefield. By request, no flowers. WOOD COFFILL LIMITED.

QUIGG.- The Relatives and Friends of Mr. and Mrs. HAROLD MCDONALD, of Vicliff-avenue, Campsie, are kindly invited to attend the Funeral of their late beloved MOTHER, Ada Amelia Quigg, to leave 274 Canterbury-road, Campsie, THIS (Monday) AFTERNOON, after service commencing at 2.30 o'clock, for Methodist Cemetery, Moorefield.  WOOD COFFILL LIMITED.