Transcript:
Sad Death.
A DEATH under peculiarly sad circumstances has to be reported.  On Saturday last we recorded the death at her residence, Rockleigh (Baw Baw), of Mrs. J. A. Guymer.  This morning at about half-past 12, Mr. Guymer, the husband of the deceased, breathed his last.  He had been in a delicate state of health, and the end was accelerated by grief at the loss of his wife.  Mr. Guymer was about 34 years of age. 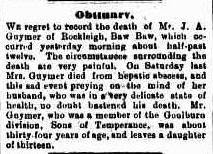 Transcript:
Obituary.
We regret to record the death of Mr. J.A. Guymer of Rockleigh, Baw Baw, which occurred yesterday morning about half-past twelve.  The circumstances surrounding the death are very painful.  On Saturday last Mrs. Guymer died from hepatic abscess, and this sad event preying on the mind of her husband, who was in a very delicate state of health, no doubt hastened his death.  Mr. Guymer, who was a member of the Goulburn division, Sons of Temperance, was about thirty four years of age, and leaves a daughter of thirteen.

Transcript:
Funeral.
THE Members of Goulburn Division, No. 44, Sons of Temperance are requested to ATTEND the FUNERAL of their late Brother, JAMES A. GUYMER, which will leave his late residence, Rockleigh, Baw Baw, for Thurlow Cemetery TOMORROW (WEDNESDAY) AFTERNOON at half-past three o'clock.
H. PURSEHOUSE, R.S.