December 03, 2013
In April 1938 my grandfather Mervyn James Phillip Donnelly was before the courts due to his committing bigamy and some of the articles reporting on this case are the subject of my Trove Tuesday posting this week. My grandfather Mervyn James Phillip Donnelly, commonly known as James or Jim was born in Bourke in 1905, the son of John Joseph (Jack) Donnelly and his wife Bridget Anastasia (nee Lambert). John Donnelly was a school teacher and the family, which included Mervyn's older half brother Frederick, moved around the state due to his employment.  In Sydney in November 1925 Mervyn joined the New South Wales Police as a Probationary Constable, but this was to be a short lived career as he resigned in April 1926.  Later in Sydney that same year he married Marie Rose Thomson (known as Rose or Rosie) who was born in 1906, the daughter of Thomas Thomson and his wife Mary Ethel (nee Smith).   Rose had been declared an uncontrollable child by the courts in June 1922 and admitted to the Parramatta Girls Training School, she remained there until February 1924 when she was conditionally released to the care of her mother.  Information about the Parramatta Training School and its terrible conditions can be found here . The marriage to my grandfather soon failed and Rose returned to live with her mother.
In November 1928 James Donnelly married my grandmother Cluna Irene O'Connor in Newcastle, she was completely unaware of the existence of his wife Rose.  Cluna was the daughter of Michael O'Connor and his wife Elizabeth Phoebe (nee Walker) and had been born in Cobar in 1910.  Nearly ten years and four children together later, Cluna received an unpleasant surprise when Mervyn's past caught up with him.  My late Aunt told me my grandmother found out when someone representing Rose came looking for Mervyn and when asked who wanted him she was told his wife was looking for him.  According to family stories Mervyn was passionately in love my grandmother and would do anything for her, including it would seem turn himself into the authorities and confess to bigamy.  She must of really loved him too as she stayed with him through the hard times, scandal, trial, and throughout his illness.  It came out during the legal proceedings that Mervyn had been court ordered to pay maintenance to Rose in 1932 and he had done so, without my grandmothers knowledge, until he came ill in 1937 and could no longer afford to pay her and support his family.  My grandparents stayed together after the trial and had two more children, the last of whom was my late father. Unfortunately Mervyn's health continued to deteriorate and he died at Morrisset Mental Hospital of suspected tuberculosis in January 1943, when my father was just twelve months old, leaving my Grandmother to raise six children alone.  My grandmother Cluna never remarried and somehow managed to keep the scandal of Mervyn's bigamy and the circumstances of his death a secret from her younger children, she died in 1989. According to her surviving family members Rose also suffered from poor health and was hospitalised for some time prior to her death in the 1940's. 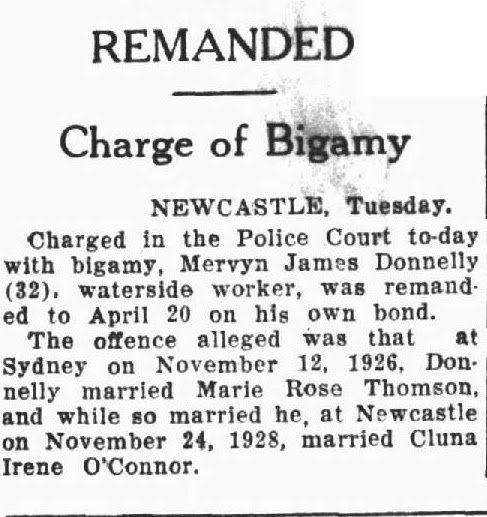 Charged in the Police Court to-day with bigamy, Mervyn James Donnelly (32), waterside worker, was remanded to April 20 on his own bond.
The offense alleged was that at Sydney on November 12, 1926, Donnelly married Marie Rose Thomson, and while so married he, at Newcastle on November 24, 1928, married Cluna Irene O'Connor. 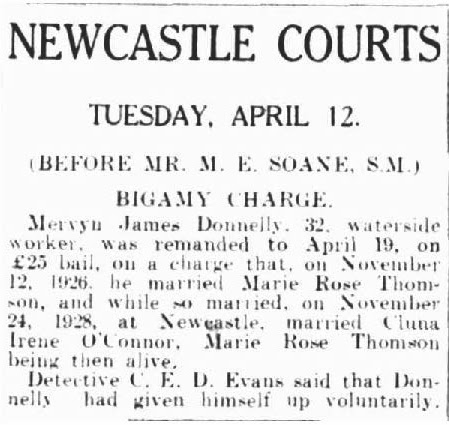 Mervyn James Donnelly, 32, waterside worker, was remanded to April 19, on  £25 bail, on a charge that on November 12, 1926, he married Marie Rose Thomson, and while so married, on November 24, 1928, at Newcastle, married Cluna Irene O'Connor, Marie Rose Thomson being then alive.
Detective C.E.D. Evans said that Donnelly had given himself up voluntarily. 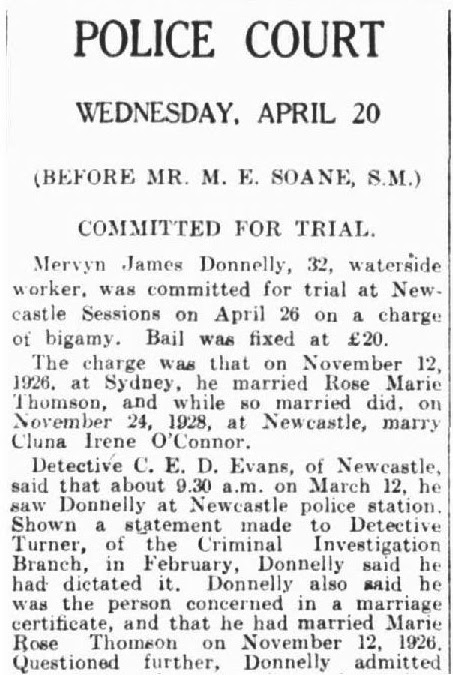 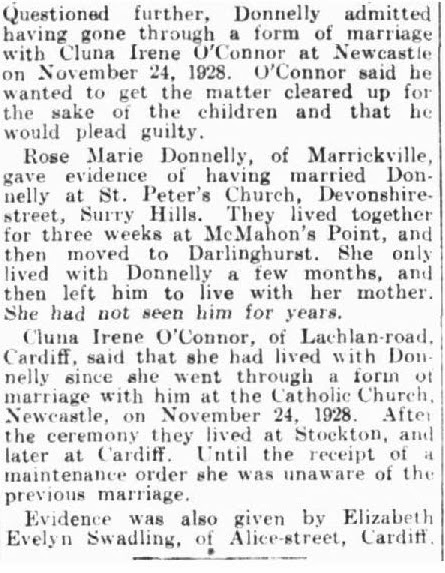 Mervyn James Donnelly, 32, waterside worker, was committed for trial at Newcastle Sessions on April 26 on a charge of bigamy.  Bail was fixed at  £20.
The charge was that on November 12, 1926, at Sydney, he married Rose Marie Thomson, and while so married did, on November 24, 1928, at Newcastle, marry Cluna Irene O'Connor.
Detective C.E.D. Evans, of Newcastle, said that about 9.30 a.m. on March 12, he saw Donnelly at Newcastle police station.  Shown a statement made to Detective Turner, of the Criminal Investigation Branch, in February, Donnelly said he had dictated it.  Donnelly also said he was the person concerned in a marriage certificate, and that he had married Marie Rose Thomson on November 12, 1926.  Questioned further, Donnelly admitted having gone through a form of marriage with Cluna Irene O'Connor at Newcastle on November 24, 1928.  O'Connor said he wanted to get the matter cleared up for the sake of the children and that he would plead guilty.
Rose Marie Donnelly, of Marrickville, gave evidence of having married Donnelly at St. Peter's Church, Devonshire-street, Surry Hills.  They lived together for three weeks at McMahon's Point, and then moved to Darlinghurst.  She only lived with Donnelly a few months, and then left him to live with her mother.  She had not seen him for years.
Cluna Irene O'Connor, of Lachlan-road, Cardiff, said that she had lived with Donnelly since she went through a form of marriage with him at the Catholic Church, Newcastle, on November 24, 1928.  After the ceremony they lived at Stockton, and later at Cardiff.  Until the receipt of a maintenance order she was unaware of the previous marriage.
Evidence was also given by Elizabeth Evelyn Swadling, of Alice-street, Cardiff. 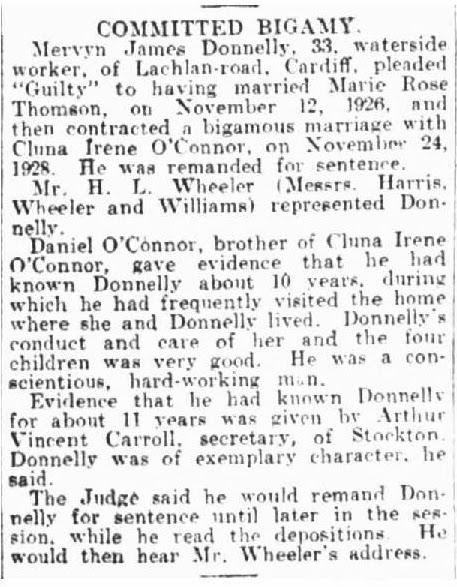 Mervyn James Donnelly, 33, waterside worker, of Lachlan-road, Cardiff, pleaded "Guilty" to having married Marie Rose Thomson, on November 12, 1926, and then contracted a bigamous marriage with Cluna Irene O'Connor, on November 24, 1928.  He was remanded for sentence.
Mr. H.L. Wheeler (Messrs. Harris, Wheeler and Williams) represented Donnelly.
Daniel O'Connor, brother of Cluna Irene O'Connor, gave evidence that he had known Donnelly about 10 years, during which he had frequently visited the home where she and Donnelly lived.  Donnelly's conduct and care of her and the four children was very good.  He was a conscientious, hard-working man.
Evidence that he had known Donnelly for about 11 years was given by Arthur Vincent Carroll, secretary, of Stockton.  Donnelly was of exemplary character, he said.
The Judge said he would remand Donnelly for sentence until later in the session, while he read the depositions.  He would then hear Mr. Wheeler's address. 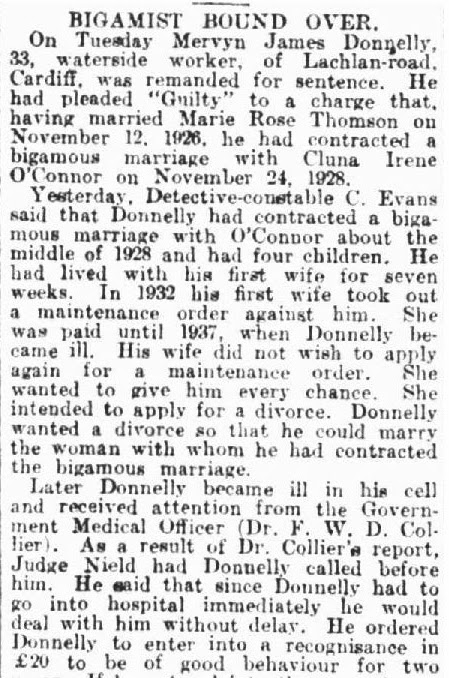 On Tuesday Mervyn James Donnelly, 33, waterside worker, of Lachlan-road, Cardiff, was remanded for sentence.  He had pleaded "Guilty" to a charge that, having married Marie Rose Thomson on November 12, 1926, he had contracted a bigamous marriage with Cluna Irne O'Connor on November 24, 1928.
Yesterday, Detective-constable C. Evans said that Donnelly had contracted a bigamous marriage with O'Connor about the middle of 1928 and had four children.  He had lived with his first wife for seven weeks.  In 1932 his first wife took out a maintenance order against him.  She was paid until 1937, when Donnelly became ill.  His wife did not wish to apply again for a maintenance order.  She wanted to give him every chance.  She intended to apply for a divorce.  Donnelly wanted a divorce so that he could marry the woman with whom he had contracted the bigamous marriage.
Later Donnelly became ill in his cell and received attention from the Government Medical Officer (Dr. F.W.D. Collier).  As a result of Dr. Collier's report, Judge Nield had Donnelly called before him.  He said that since Donnelly had to go into hospital immediately he would deal with him without delay.  He ordered Donnelly to enter into a recognisance in  £20 to be of good behaviour for two years.  If he entered into the recognisance no sentence would be passed. 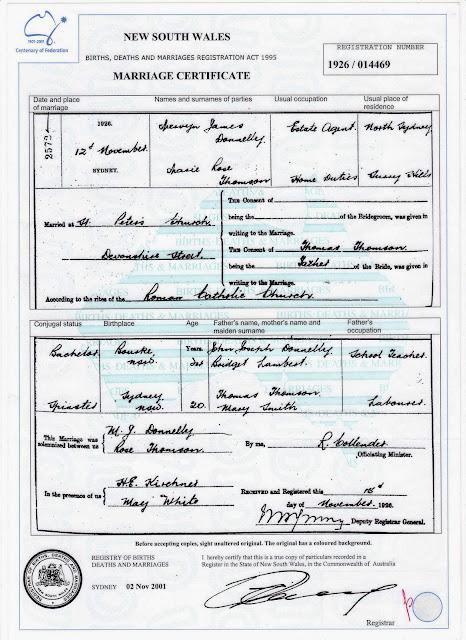 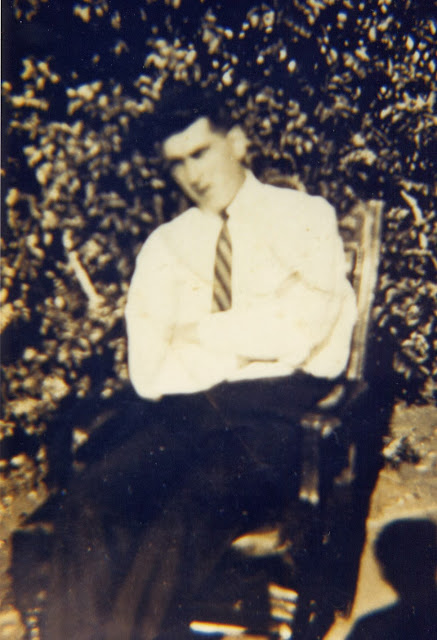 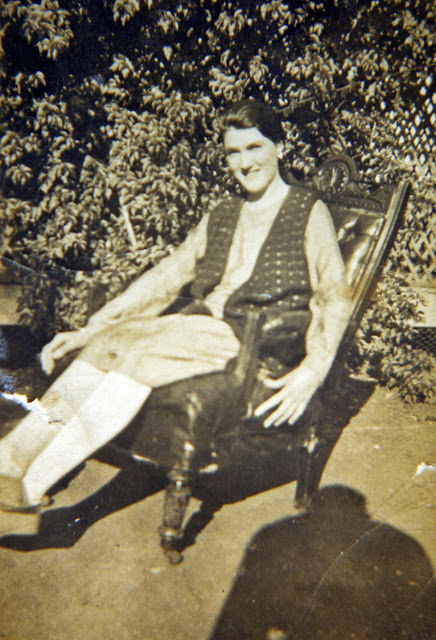