December 12, 2013
Sarah Maria Jeffery was born in 1890 the daughter of William Jeffery and his wife Annora Elizabeth (Annie) nee Bell.  My connection with her is that she is my second cousin three times removed.  Sarah was tragically burnt in an accident at home on the 30th November 1898, her mother also suffered severe burns to her hands when putting out the flames.  With no doctor locally, Sarah was transported by train to Goulburn for medical attention.  The doctor thought it unlikely she would survive and the little girl was kept at her grandmothers house in Goulburn until the following Monday when the doctor ordered her hospital admission. Sarah died as a result of burns accidentally received on the 7th December 1898 in Goulburn. 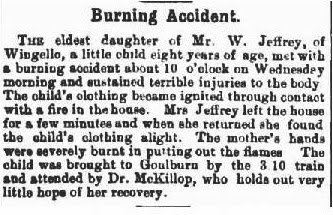 THE eldest daughter of Mr. W. Jeffrey, of Wingello, a little child eight years of age, net with a burning accident about 10 o'clock on Wednesday morning and sustained terrible injuries to the body  The child's clothing became ignited through contact with a fire in the house.  Mrs Jeffrey left the house for a few minutes and when she returned she found the child's clothing alight.  The mother's hands were severly burnt in putting out the flames  The child was brought to Goulburn by the 3 10 train and attended by Dr. McKillop, who holds out very little hope of her recovery. 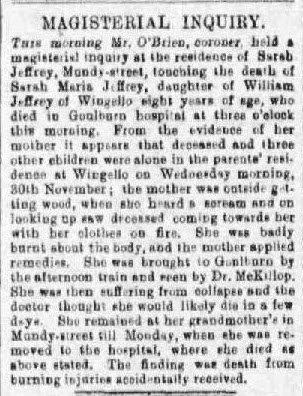 THIS morning Mr. O'Brien, coroner, held a magisterial inquiry at the residence of Sarah Jeffrey, Mundy-street, touching the death of Sarah Maria Jeffrey, daughter of William Jeffrey of Wingello eight years of age, who died in Goulburn hospital at three o'clock this morning.  From the evidence of her mother it appears that deceased and three other children were alone in the parents' residence at Wingello on Wednesday morning, 30th November ; the mother was outside getting wood, when she heard a scream and on looking up saw deceased coming towards her with her clothes on fire.  She was badly burnt about the body, and the mother applied remedies.  She was brought to Goulburn by the afternoon train and seen by Dr. McKillop.  She was then suffering from collapse and the doctor thought she would likely die in a few days.  She remained at her grandmother's in Mundy-street till Monday, when she was removed to the hospital, where she died as above stated.  The finding was death from burning injuries accidentally received. 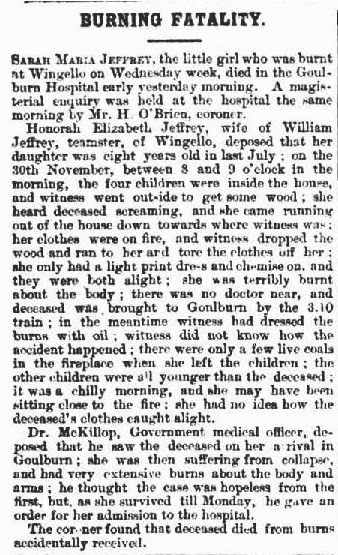 SARAH MARIA JEFFREY, the little girl who was burnt at Wingello on Wednesday week, died in the Goulburn Hospital early yesterday morning.  A magisterial enquiry was held at the hospital the same morning by Mr. H. O'Brien, coroner.
Honorah Elizabeth Jeffrey, wife of William Jeffrey, teamster, of Wingello deposed that her daughter was eight years old in last July ; on the 30th November, between 8 and 9 o'clock in the morning, the four children were inside the house, and witness went out-ide to get some wood ; she heard deceased screaming, and she came running out of the house down towards where witness was ; her clothes were on fire, and witness dropped the wood and ran to her and tore the clothes off her ; she only had a light print dress and chemise on, and they were both alight ; she was terribly burnt about the body ; there was no doctor near, and deceased was brought to Goulburn by the 3.10 train ; in the meantime witness had dressed the burns with oil ; witness did not know how the accident happened ; there were only a few live coals in the fireplace when she left the children ; the other children were all younger than the deceased ; it was a chilly morning, and she may have been sitting close to the fire ; she had no idea how the deceased's clothes caught alight.
Dr. McKillop, Government medical officer, deposed that he saw the deceased on her arrival in Goulburn ; she was then suffering from collapse, and had very extensive burns about the body and arms ; he thought the case was hopeless from the first, but, as she survived till Monday, he gave an order for her admission to the hospital.
The coroner found that deceased died from burns accidentally received.

A girl of 8 years, named Sarah Maria Jeffrey, died at Goulburn Hospital yesterday from sever burns received at Wingello a week ago.