May 02, 2018
Today's post involves my Great Aunt Dorothy Jean Stevens.  She was the daughter of John Patrick Stevens and his wife Ada Louisa (nee Jones) and the sister of my maternal Grandfather Roy Thomas Stevens.  In 1946 she married George Wilfred Briggs at Young, New South Wales.  The marriage apparently did not last very long with him applying for a divorce in 1953 on the grounds of desertion.  According to the Stevens family history she went on to live in a de facto relationship for many years but unfortunately died of a stroke aged forty six in 1973 and is buried at Rookwood Catholic Cemetery in Sydney. It appears that George Briggs married again in 1953 and died in 1984. 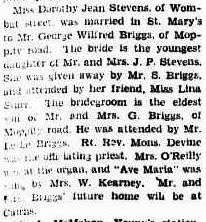 Miss Dorothy Jean Stevens, of Wombat Street was married in St. Mary's to Mr. George Wilfred Briggs, of Moppity road.  The bride is the youngest daughter of Mr. and Mrs. J.P. Stevens.  She was given away by Mr. S. Briggs, and attended by her friend, Miss Lina Starr.  The bridegroom is the eldest son of Mr. and Mrs. G. Briggs, of Moppity road.  He was attended by Mr. ? Briggs.  Rt. Rev. Mons. Devine was the officiating priest.  Mrs. O'Reilly was at the organ, and 'Ave Maria' was sung by Mrs. W. Kearney.  'Mr. and Mrs Briggs' future home will be at Cairns. 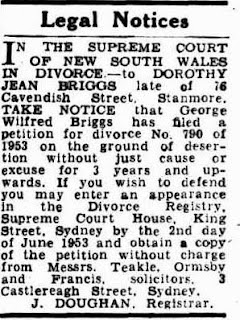 IN THE SUPREME COURT OF NEW SOUTH WALES IN DIVORCE.- to DOROTHY JEAN BRIGGS late of 76 Cavendish Street, Stanmore.  TAKE NOTICE that George Wilfred Briggs has filed a petition for divorce No. 790 of 1953 on the ground of desertion without just cause or excuse for 3 years and upwards.  If you wish to defend you may enter an appearance in the Divorce Registry, Supreme Court House, King Street, Sydney by the 2nd day of June 1953 and obtain a copy of the petition without charge from Messrs. Teakle, Ormsby and Francis, solicitors.  3 Castlereagh Street, Sydney.
J. DOUGHAN, Registrar.