May 01, 2018
Today's post concerns my Great Grand Uncle William Henry Lambert.  Previous posts I have done on him can be found, here and here.  William was the Lord Mayor of Sydney in 1921. Someone was a very passionate supporter of him!  I guess with politics it can really be said that the more things change the more they stay the same. 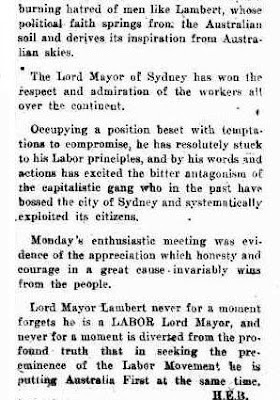 LORD MAYOR LAMBERT, of Sydney, has many enemies, and for that reason he has also many friends.
It would be hard to say of which he should be most proud, for both, though in different ways, are a tribute to his worth as a representative of the Labor movement.
Last Monday night the Town Hall was filled with his friends.  From every part of the city they came - thousands of earnest eager men and women, glad to bear testimony to the sterling and courageous service he is rendering to the cause of the working class.
Eulogistic speeches were delivered by prominent Labor advocates, and it is significant that the speakers in every instance associated Lambert with the sentiment which was inscribed on a large sign stretched across the front of the platform 'AUSTRALIA FIRST'.
Lambert is a true Australian, not so much in the sense of being a native of the country, as in the fact that his public life has been distinguished by the sturdy upholding of the interests of Australian democracy against the disloyalists who would subordinate this nation to the schemes of foreign imperialists.
Sir Charles Rosenthal recently declared the doctrine of 'Australia First' a dangerous one.  Probably that was why a number of hoodlums of the same opinion as that bombastical brasshat tore down the Australian flag in the Domain and trampled it under foot, with the object of exalting the flag of Great Britain in its place.
From the standpoint of the Rosenthals 'Australia First' most certainly IS dangerous.  The truth is always regarded as a danger by those who would maintain the sovereignty of a lie.
Imperialism, as one of the diabolical falsehoods of our day, worshipping alien devils, hates to see the love of Australia taking first place in the hearts of the people.
The growth of that passion for the land we live in constitutes the gravest peril for Imperialists, and its inseparable association with the Labor Movement fills them with a burning hatred of men like Lambert, whose political faith springs from the Australian soil and derives its inspiration from Australian skies.
The Lord Mayor of Sydney has won the respect and admiration of the workers all over the continent.
Occupying a position beset with temptations to compromise, he has resolutely stuck to his Labor principles, and by his words and actions has excited the bitter antagonism of the capitalist gang who in the past have bossed the city of Sydney and systematically exploited its citizens.
Monday's enthusiastic meeting was evidence of the appreciation which honest and courage in a great cause invariably wins from the people.
Lord Mayor Lambert never for a moment forgets he is a LABOR Lord Mayor, and never for a moment is diverted from the profound truth that in seeking the preeminence of the Labor Movement he is putting Australia First at the same time.
H.E.B.