Today's article has really piqued my curiosity.  It involves the charging of one James Walden with the murder of his 'wife' Catherine Walden at Beechworth in 1855.  My 4th Great Grandfather was James Baker Walden later known as James Baker Worldon and his 'wife' was Catherine Rhall.  Catherine had married a convict John Casey in 1835. She is also known to have had a relationship with John Glithero/w another convict to whom she had at least three children (Sarah b.1840, William b.1843 and Richard b.1845) before her relationship with James Walden/Worldon.  James and Catherine had at least two children together, Elizabeth b.1850 and James Baker b.1853.  While we know that James died in Gundagai in 1878, Catherine's fate has not been definitively proven yet.  A Catherine Rall died in Bathurst in 1856, but there is no proof that this was our Catherine.  A point of interest is that Catherine's immediate family were in the Beechworth area in the 1850's, her half brother Edward Rhall died at Spring Creek and was buried in Beechworth in 1853. Catherine's daughter Sarah also had strong ties with Beechworth, she lived there with her partner and children and died there in 1898. Needless to say this articles facts are ones that I am going to pursue further, while it could be a wild goose chase there is always a slight chance that it may not be! 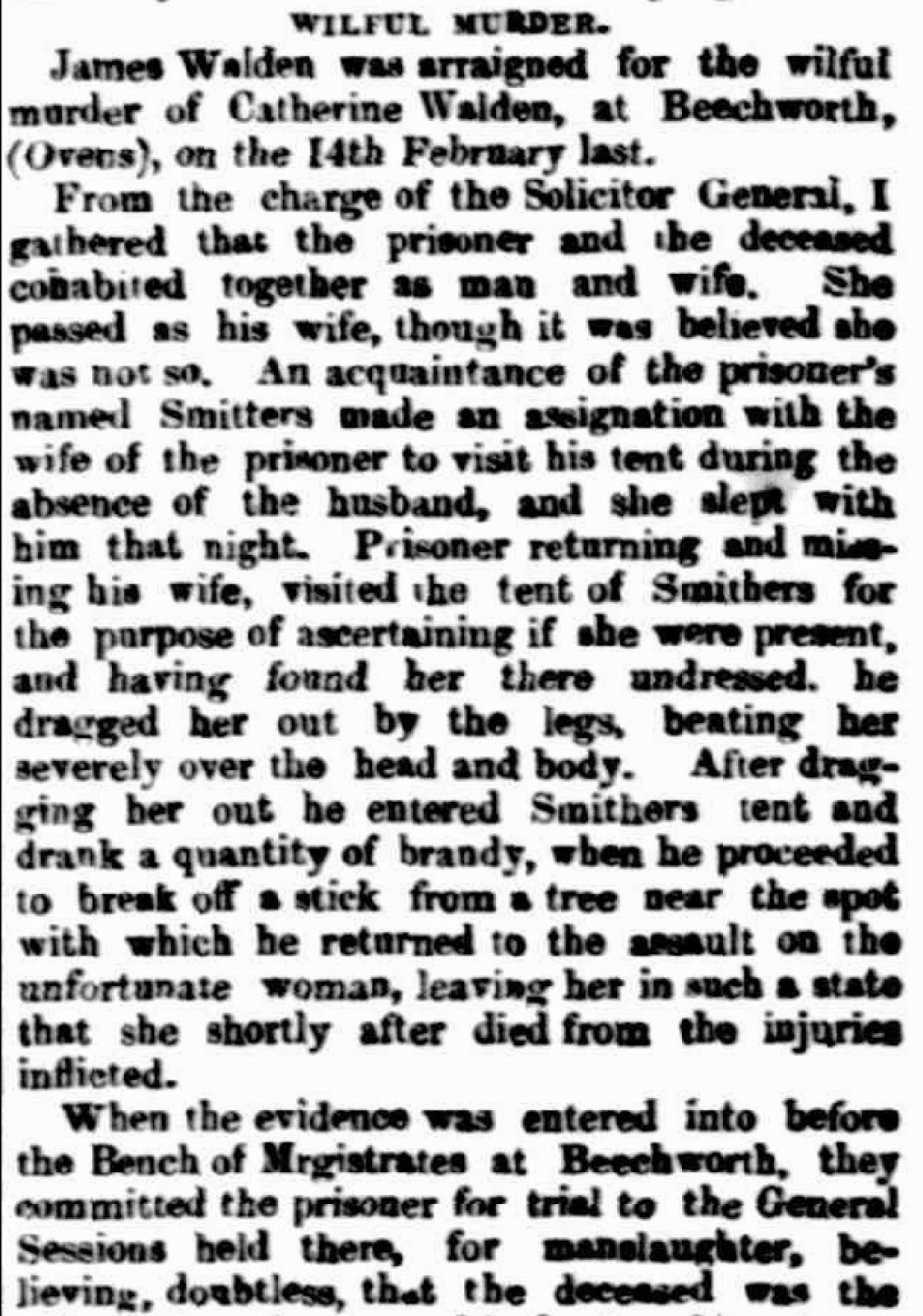 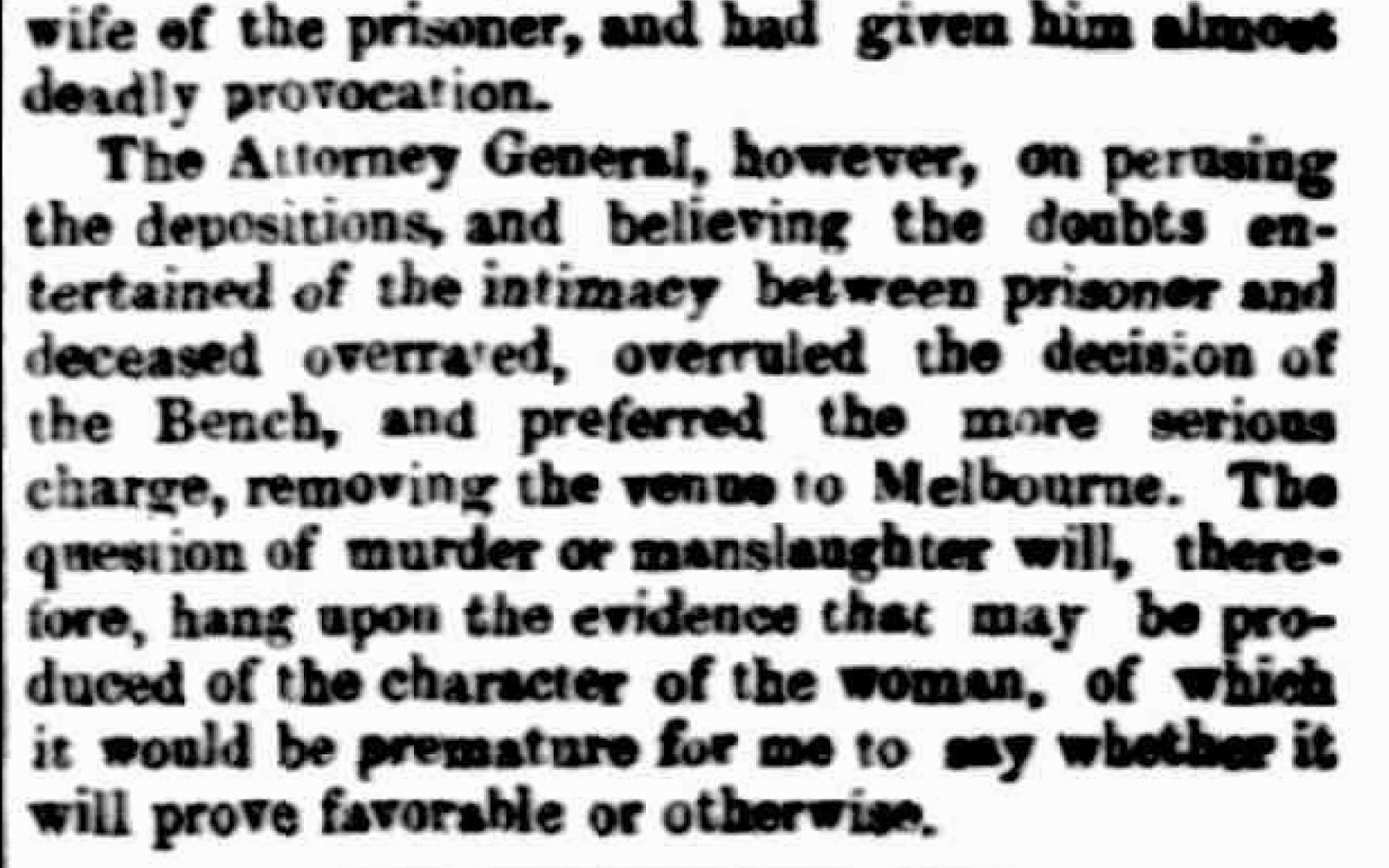 James Walden was arraigned for the wilful murder of Catherine Walden, at Beechworth, (Ovens), on the 14th February last.
From the charge of the Solicitor General, I gathered that the prisoner and the deceased cohabited together as man and wife.  She passed as his wife, though it was believed she was not so.  An acquaintance of the prisoner's named Smitters made an assignation with the wife of the prisoner to visit his tent during the absence of the husband, and she slept with him that night. Prisoner returning and missing his wife, visited the tent of Smithers for the purpose of ascertaining if she were present, and having found her there undressed. he dragged her out by the legs, beating her severely over the head and body.  After dragging her out he entered Smithers tent and drank a quantity of brandy, when he proceeded to break off a stick from a tree near the spot with which he returned to the assault on the unfortunate woman, leaving her in such a state that she shortly after died from the injuries inflicted.
When the evidence was entered into before the Bench of Magistrates at Beechworth, they committed the prisoner for trial to the General Sessions held there, for manslaughter, believing, doubtless, that the deceased was the wife of the prisoner, and had given him almost deadly provocation.
The Attorney General, however, on perusing the depositions, and believing the doubts entertained of the intimacy between prisoner and deceased overrated, overruled the decision of the Bench, and preferred the more serious charge, removing the venue to Melbourne.  The question of murder or manslaughter will, therefore, hang upon the evidence that may be produced of the character of the woman, of which it would be premature for me to say whether it will prove favorable or otherwise.