August 28, 2014
I have previously blogged about my my first cousins two times removed Sylvester Gervase and Frances Eulalie Donnelly (see here), when they survived a bad experience at the beach.  Today's post about them unfortunately does not have a happy ending. Over forty years after that day at the beach tragedy was to befall the siblings at a level crossing in wet conditions.

Woman Dies In Crash At Crossing

A woman was killed and a man critically injured yesterday when their car collided with a diesel train at Merrygoen, near Mudgee.
The dead woman was Mrs. Frances McInnes 45, of Amplesort Street, Albury.
The driver of the car, Silvester Donnelly, 53, of Merrygoen, had his skull fractured.
He was taken to the Merrygoen Hospital in a serious condition.
CAR WRECKED
The accident was at a lvel crossing two miles from Merrygoen, at 3.40p.m.
The train was running between Binnaway and Mudgee.
The car was completely wrecked.

At the level crossing on Merrygoen-Neilrex road a woman was killed instantly and her brother seriously injured when the train from Mudgee collided with their utility truck.
The woman was Mrs. McGuinness, wife of Police Sergeant F.E. McGuiness, of Albury, who at one time as stationed at Gilgandra.  Deceased had been holidaying with her brother, Mr. S. Donnelly, of Merrygoen, the man injured in the accident.  He was admitted to the Mendooran C.W.A. Hospital and his progress is reported as satisfactory.
At the time of the accident visibility was poor because of heavy rains and the view of the railway line was obstructed by thistle and high weeds.
Mrs. McGuinness was well known in Mendooran, as her father was headmaster of the Mendooran school many years ago.  Mrs. Buckley, of 'Bone Bone,' is an aunt of the deceased.
The funeral services were conducted in Coonabarabran, at St. Lawrence's Church and at the Catholic portion of the Coonabarabran cemetery, Rev. Father J.J. McKeon officiating. 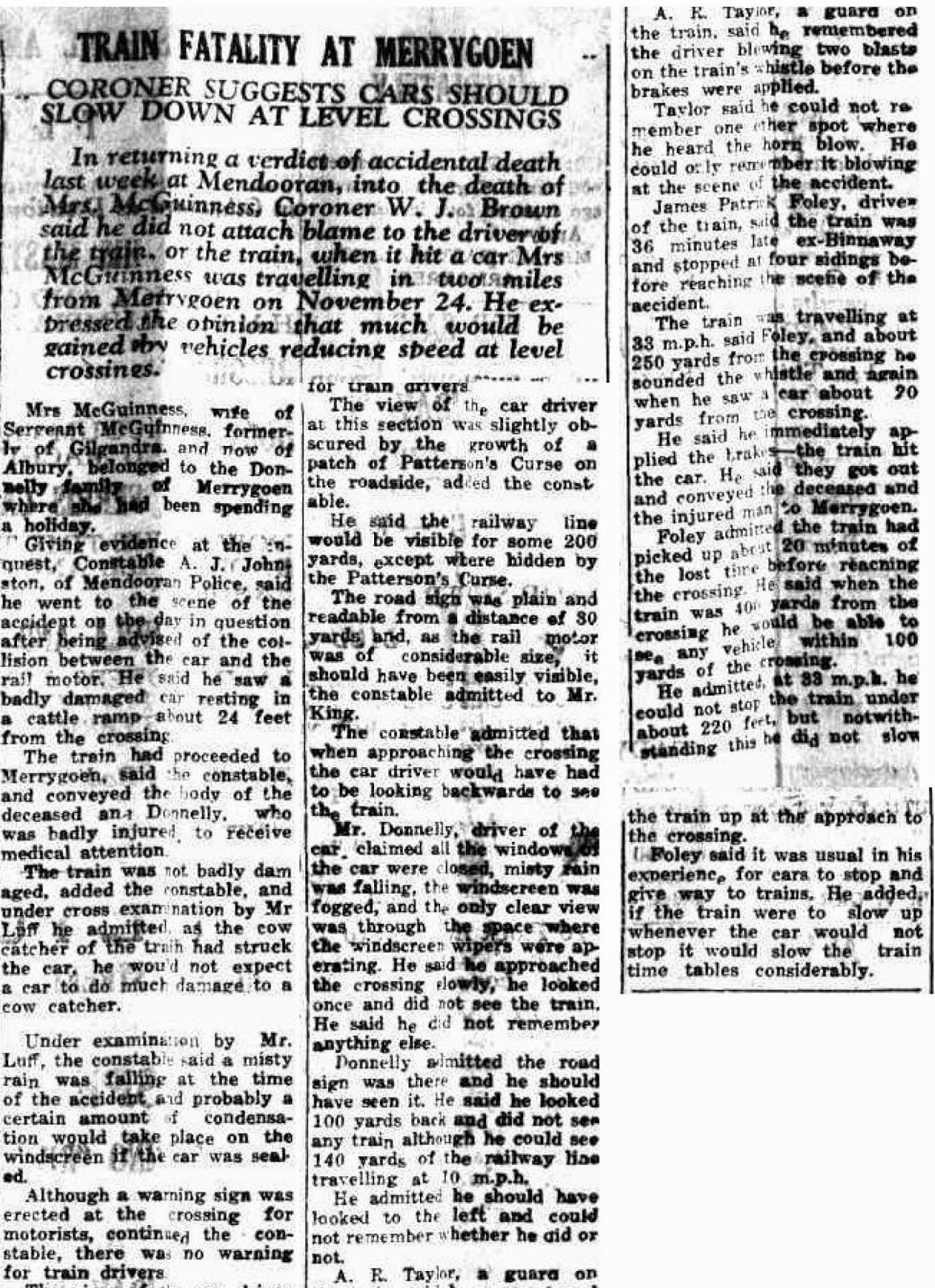 CORONER SUGGESTS CARS SHOULD SLOW DOWN AT LEVEL CROSSINGS

In returning a verdict of accidental death last week at Mendooran, into the death of Mrs. McGuinness, Coroner W.J. Brown said he did not attach blame to the driver of the train, or the train, when it hit the a car Mrs McGuinness was travelling in two miles from Merrygoen on November 24.  He expressed the opinion that much would be gained by vehicles reducing speed at level crossings.

Mrs. McGuinness, wife of Sergeant McGuinness, formerly of Gilgandra and now of Albury, belonged to the Donnelly family of Merrygoen where she had been spending a holiday.
Giving evidence at the inquest, Constable A.J. Johnston, of Mendooran Police, said he went to the scene of the accident on the day in question after being advised of the collision between the car and the rail motor.  He said he saw a badly damaged car resting in a cattle ramp about 24 feet from the crossing.
The train had proceeded to Merrygoen, said the constable, and conveyed the body of the deceased and Donnelly, who was badly injured, to receive medical attention.
The train was not badly damaged, added the constable, and under cross examination by Mr Luff he admitted as the cow catcher of the train had struck the car, he would not expect a car to do much damage to a cow catcher.
Under examination by Mr Luff, the constable said a misty rain was falling at the time of the accident and probably a certain amount of condensation would take place on the windscreen if the car was sealed.
Although a warning sign was erected at the crossing for motorists, continued the constable, there was no warning for train drivers.
The view of the car driver at this section was slightly obscured by the growth of a patch of Patterson's curse on the roadside, added the constable.
He said the railway line would be visible for some 200 yards, except where hidden by the Patterson's curse.
The road sign was plain and readable from a distance of 30 yards and, as the rail motor was of considerable size, it should have been easily visible, the constable admitted to Mr. King.
The constable admitted that when approaching the crossing the car driver would have had to be looking backwards to see the train.
Mr. Donnelly, driver of the car, claimed all the windows of the car were closed, misty rain was falling, the windscreen was fogged, and the only clear view was through the space where the windscreen wipers were operating.  He said he approached the crossing slowly, he looked once and did not see the train.  He said he did not remember anything else.
Donnelly admitted the road sign was there and he should have seen it.  He said he looked a 100 yards back and did not see any train although he could see 140 yards of railway line travelling at 10 m.p.h.
He admitted he should of looked to the left and could not remember whether he did or not.
A.R. Taylor a guard on the train, said he remembered the driver blowing two blasts on the train's whistle before the brakes were applied.
Taylor said he could not remember one other spot where he heard the horn blow.  He could only remember it blowing at the scene of the accident.
James Patrick Foley, driver of the train, said the train was 36 minutes late ex-Binnaway and stopped at four sidings before reaching the scene of the accident.
The train was travelling at 33 m.p.h. said Foley, and about 250 yards from the crossing he sounded the whistle and again when he saw a car about 90 yards from the crossing.
He said he immediately applied the brakes - the train hit the car.  He said they got out and conveyed the deceased and injured man to Merrygoen.
Foley admitted the train had picked up about 20 minutes of lost time before reaching the crossing.  He said when the train was 400 yards of the crossing he would be able to see any vehicle within 100 yards of the crossing.
He admitted at 33 m.p.h. he could not stop the train under about 220 feet, but not withstanding this he did not slow the train up at the approach to the crossing.
Foley said it was usual in his experience for cars to stop and give way to trains.  He added, if trains were to slow up whenever the car would not stop it would slow the train time tables considerably.

Mrs Frances McGuinness, wife of Sergeant W.R. McGuinness, of Albury,  and formerly of Uralla, met her death in tragic circumstances last Friday, when a car in which she was a passenger collided with a diesel train at Merrygoen.
The car was being driven by her brother, Mr. Sylvester Donnelly, of Merrygoen, whose skull was fractured and he was taken to hospital in a serious condition.
The accident occurred at a level crossing two miles from the township.  The train was running between Binnaway and Mudgee.
The car was completely wrecked.
Mrs McGuinness called at Uralla quite recently, being then on her way to Inverell to visit her daughter, Mrs Hiscox, with whom she spent a holiday.
While resident at Uralla, Mrs McGuinness took an active part in the affairs of the Country Women's Association and made many friends, who received the news of her tragic death with deep regret.