August 31, 2014
George William Last was the husband of my 4th great grand aunt Ann Last (nee Costello).  He married Ann in 1860 and together they raised a large family.  He died as a result of injuries received from a sulky accident in 1919. 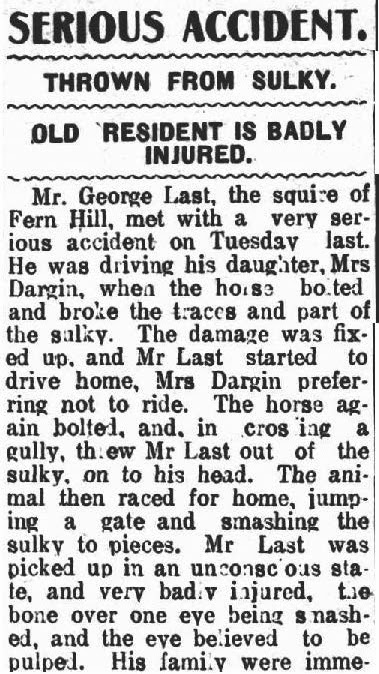 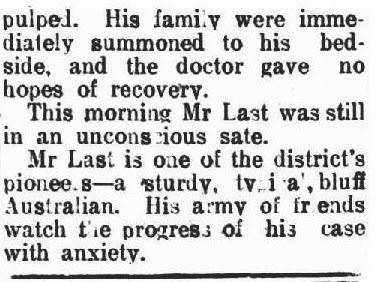 Mr. George Last, the squire of Fern Hill, met with a very serious accident on Tuesday last.  He was driving his daughter Mrs Dargin, when the horse bolted and broke the traces and part of the sulky.  The damage was fixed up, and Mr. Last started to drive home, Mrs Dargin preferring not to ride.  The horse again bolted, and, in crossing a gully, threw Mr Last out of the sulky, on to his head.  The animal then raced for home, jumping a gate and smashing the sulky to pieces.  Mr Last was picked up in an unconscious state, and very badly injured, the bone over one eye being smashed, and the eye believed to be pulped.  His family were immediately summoned to his bedside, and the doctor gave no hopes of recovery.
This morning Mr Last was still in an unconscious sate.
Mr Last is one of the district's pioneers- a sturdy, typical, bluff Australian.  His army of friends watch the progress of his case with anxiety. 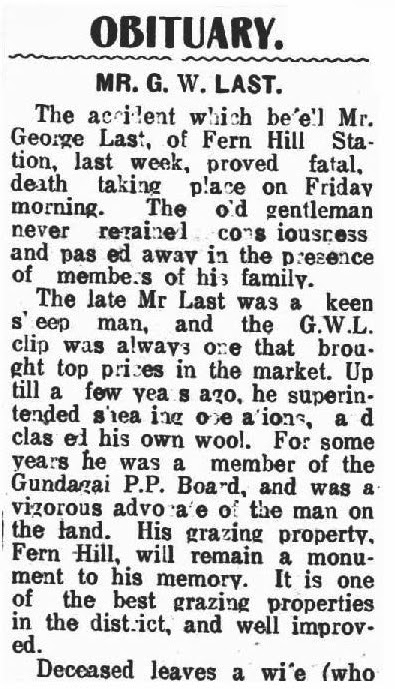 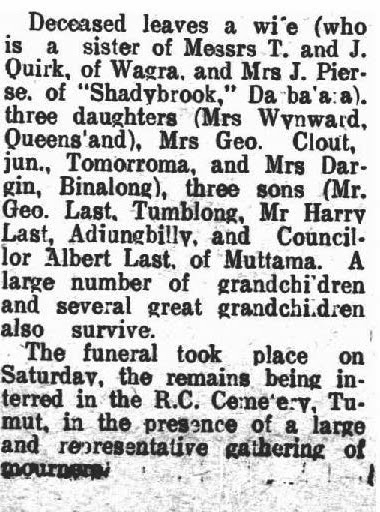 The accident which befell Mr. George Last, of Fern Hill Station, last week, proved fatal, death taking place on Friday morning.  The old gentleman never regained consciousness and passed away in the presence of members of his family.
The late Mr Last was a keen sheep man, and the G.W.L. clip was always one that brought top pices in the market.  Up till a few years ago, he superintended shearing operations, and classed his own wool. For some years he was a member of the Gundagai P.P. Board, and was a vigorous advocate of the man on the land.  His grazing property, Fern Hill, will remain a monument to his memory.  It is one of the best grazing properties, in the district and well improved.
Deceased leaves a wife (who is a sister of Messrs T. and J. Quirk, of Wagra, and Mrs. J. Pierse, of 'Shadybrook,' Darbalara), three daughters (Mrs Wynward, Queensland), Mrs Geo. Clout, jun. Tomorroma, and Mrs Dargin, Binalong), three sons (Mr. Geo. Last, Tumblong, Mr Harry Last, Adjungbilly, and Councillor Albert Last, of Muttama.  A large number of grandchildren and several great grandchildren also survive.
The funeral took place on Saturday, the remains being interred in the R.C. Cemetery, Tumut, in the presence of a large and representative gathering of mourners.

George Last and his wife Ann nee Costello had the following children: