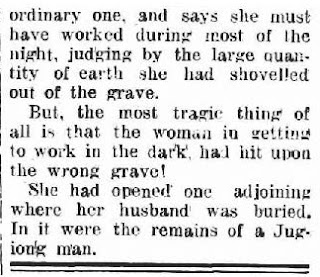 Woman Attempts to Dig Up a Corpse.
The gravedigger rubbed his eyes!  Then he pinched himself to see if he was awake.
It was shortly after daylight on Friday morning that the local gravedigger, Mr. J. Worldon went to the R.C. cemetery, North Gundagai to put down a grave.
Digging frantically in a grave in the cemetery, he saw a woman in the cemetery clad only in a kimina.  She was waistdeep in the grave, and was shovelling out the earth in a manner that was astonishing.
Mr Worldon recognised the woman as the widow of a man who died suddenly at Gundagai a week previously and he endeavored to get her to desist.  She refused to do so saying "He is not dead!"
Near the graveside was the clothing of the woman's dead husband - his suit, socks and hat but she was wearing his boots: she had put them on over her own shoes.  "I must have everything ready for him when I get him out." she said.
Seeing he could no goof.  Mr. Worldon went to the nearest phone, and sent word to town.  The woman's only relative here- a nephew- secured a car, and immediately went to the cemetery.  When he tried to persuade her to stop trying to get the coffin out she retorted, "Mind your own business!"
The motor man was a man of action.  He jumped into the grave where the woman was, and lifted her out bodily.  Then she was carried to the car and brought to Gundagai.
The matter was reported to the police, and Sergeant Hinde and Constable Ryan went to the cemetery and gave orders for the disturbed grave to be filled in.  The woman was interviewed, and the police found her quite rational on all points but one - she believed that her husband was not dead, but was in a trace.  However, they persuaded her to leave Gundagai by the afternoon train.
Mr Worldon says that when the woman was got out she had just reached the top of the coffin.  He looks upon her feat as an extraordinary one, and says she must have worked during most of the night, judging by the large quantities of earth she had shovelled out of the grave.
But, the most tragic thing of all is that the woman in getting to work in the dark, had hit upon the wrong grave!
She had opened one adjoining where her husband was buried.  In it were the remains of a Jugiong man.