September 10, 2013
I recently came across this article on Trove while doing some research on my Great Great Grandparents James Baker Worldon and his wife Flora Ann (nee McDonnell) and automatically thought I have to use this for a Trove Tuesday post.  As far as reasons go for not paying maintenance it is quite an interesting one! 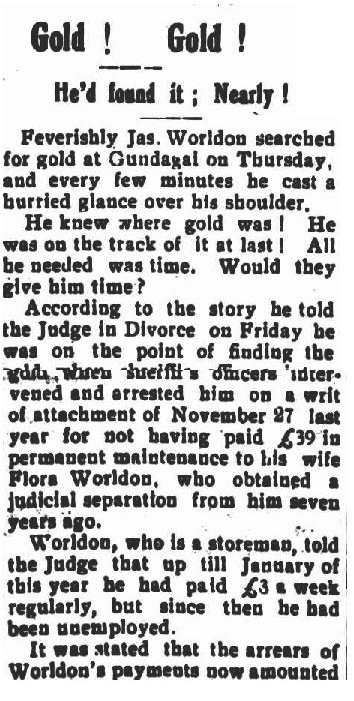 Feverishly Jas. Worldon searched for gold at Gundagai on Thursday, and every few minutes he cast a hurried glance over his shoulder.
He knew where gold was  He was on the track of it at last  All he needed was time.  Would they give him time?
According to the story he told the Judge in Divorce on Friday he was on the point of finding the gold, when sheriff's officers intervened and arrested him on a writ of attachment of November 27 last year for not having paid £39 in permanent maintenance to his wife Flora Worldon, who obtained a judicial separation from him seven years ago.
Worldon, who is a storeman, told the Judge that up till January of this year he had paid £3 a week regularly, but since then he had been unemployed.
It was stated that the arrears of Worldon's payments now amounted to £136/10/, and as he could give no definite promise of payment, Mr. Justice Owen remanded him to his former custody.

One of the surprises I have had over the course of my research was finding out that this couple separated and that he went on to have another family.  It was certainly never mentioned around me as a child, I had assumed he must of died early as no one ever mentioned him!

'Gundagai - A warrant has been issued by the Gundagai Bench for the arrest of James Worldon, charged with wife desertion.  He is 40 years of age, 5 feet 9 or 10 inches high, medium build, 12 stone weight, sallow complexion, brown hair, heavy-brown moustache, blue eyes, scar on face near the left eye, good teeth, soft low voice, walks with a long stride, and generally stands with his legs crossed; dressed in dark clothes; a grocer; a native of Gundagai district; may be accompained by Ettie Sheather, 24 years of age, dark complexion, fair skin, dark frizzy hair, heavy dark eyebrows, good artifical teeth, has a slight impediment in her speech; wears a cluster diamond brooch and a cluster diamond ring.  Complainant, Flora Ann Worldon, Gundagai.  (Photo. filed at office of the Inspector-General of Police.)'

'Vide Police Gazette, 1921, page 630.
James Worldon, charged on warrant with wife desertion, has been arrested by Sergeant 3rd Class Loomes, Gundagai Police.  Ordered to pay £3 per week for the support of his wife, and £3 11s costs.' 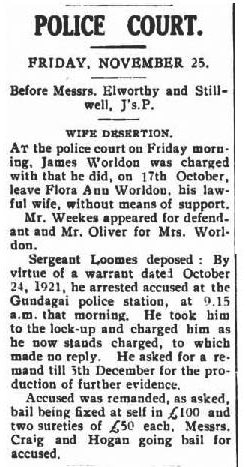 AT the police court on Friday morning, James Worldon was charged with that he did, on 17th October, leave Flora Ann Worldon, his lawful wife, without means of support.
Mr. Weekes appeared for defendant and Mr. Oliver for Mrs. Worldon.
Sergeant Loomes deposed: By virtue of a warrant dated October 24, 1921 he arrested accused at the Gundagai police station, at 9.15 a.m. that morning.  He took him to the lock-up and charged him as he now stands charged, to which made no reply.  He asked for a remand till 5th December for the production of further evidence.
Accused was remanded, as asked, bail being fixed at self in £100 and two sureties of £50 each, Messrs. Craig and Hogan going bail for accused. 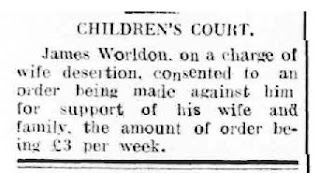 James Worldon. on a charge of wife desertion, consented to an order being made against him for support of his wife and family, the amount of order being £3 per week.

In the Sydney Divorce Court on Wednesday, Flora Worldon, of Gundagai, got a judicial separation from James Worldon, late storekeeper at Gundagai.

Trove has more stories coming soon concerning these events, it will be interesting to see what turns up next!