September 08, 2013
Today's obituary is for Mary Pierse nee Quirk who is my 3rd Great Grandmother.  Born c.1840 in County Tipperary, Ireland she was left behind with her Grandmother in Ireland when her parents Michael Quirk and his wife Honorah nee Costello immigrated to Australia in 1841.  In 1858, Mary along with her Grandmother Ann Costello, Uncle John Costello and Aunt Ann Costello, arrived in Australia on board the ship Peter Maxwell.  On the 25th May 1863 at the Tumut Catholic Church Mary married John Pierse, an Irishman from County Kerry, Ireland and together they had fourteen children.  John died in 1921 and Mary on 24th December 1924, she was buried at Wagragobilly Cemetery on Christmas Day 1924. 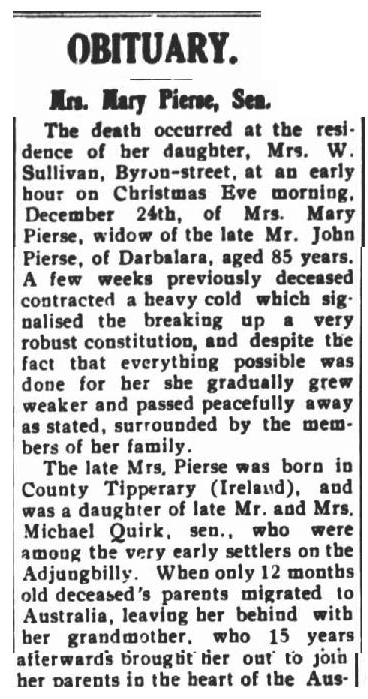 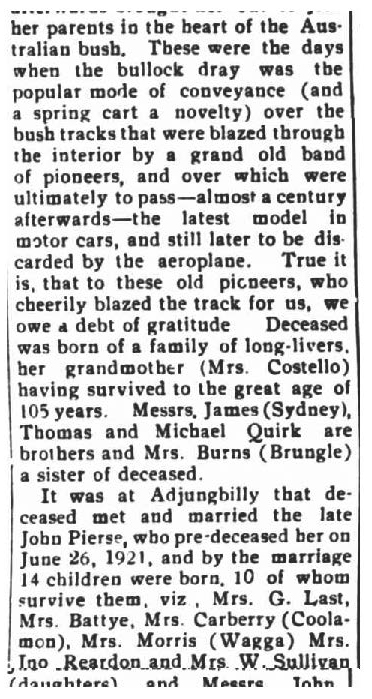 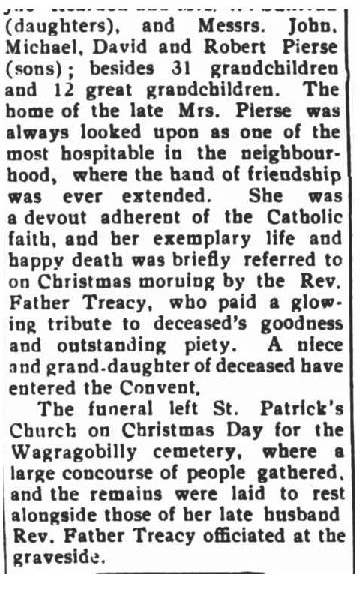 The death occurred at the residence of her daughter, Mrs. W. Sullivan, Byron-street, at an early hour on Christmas Eve morning.  December 24th, of Mrs. Mary Pierse, widow of the late Mr. John Pierse, of Darbalara, aged 85 years.  A few weeks previously deceased contracted a heavy cold which signalised the breaking up a very robust constitution, and despite the fact that everything possible was done for her she gradually grew weaker and passed peacefully away at stated, surrounded by the members of her family.
The late Mrs. Pierse was born in County Tipperary (Ireland), and was a daughter of late Mr. and Mrs. Michael Quirk, sen., who were among the very early settlers on the Adjungbilly.  When only 12 months old deceased's parents migrated to Australia, leaving her behind with her grandmother who 15 years afterwards brought her out to join her parents in the heart of the Australian bush.  These were the days when the bullock dray was the popular mode of conveyance (and a spring cart a novelty) over the bush tracks that were blazed through the interior by a grand old band of pioneers, and over which were ultimately to pass- almost a century afterwards- the latest model in motor cars, and still later to be discarded by the aeroplane.  True it is, that to these old pioneers, who cheerily blazed the track for us, we owe a debt of gratitude  Deceased was born of a family of long-livers, her grandmother (Mrs. Costello) having survived to the great age of 105 years.  Messrs. James (Sydney), Thomas and Michael Quirk are brothers and Mrs. Burns (Brungle) a sister of deceased.
It was at Adjungbilly that deceased met and married the late John Pierse, who pre-deceased her on June 26, 1921, and by the marriage 14 children were born, 10 of whom survive them, viz, Mrs. G. Last, Mrs. Battye, Mrs. Carberry (Coolamon), Mrs. Morris (Wagga), Mrs. Jno. Reardon and Mrs. W. Sullivan (daughters) and Messrs. John, Michael, David and Robert Pierse (sons); besides 31 grandchildren and 12 great grandchildren.  The home of the late Mrs. Pierse was always looked upon as one of the most hospitable in the neighbourhood, where the hand of friendship was ever extended.  She was a devout adherent of the Catholic faith, and her exemplary life and happy death was briefly referred to on Christmas morning by the Rev. Father Treact, who paid a glowing tribute to deceased'd goodness and outstanding piety.  A niece and grand-daughter of deceased have entered the Convent.
The funeral left St. Patrick's Church on Christmas Day for the Wagragobilly cemetery, where a large concourse of people gathered, and the remains were laid to rest alongside those of her late husband Rev. Father Treacy officiated at the graveside.


John Pierse and his wife Mary (nee Quirk) had the following children: