July 02, 2013
My 5th Great Grandmother Ann Puckeridge nee Maund is the subject of my Trove Tuesday blog this week.  After her son William's conviction in 1827 for the murder of Patrick McCooey (who had allegedly taken advantage and abused Ann while she was intoxicated) she doesn't seem to have changed the direction of her life at all. In 1829 she was caught harbouring two prisoners at her home illegally and not much effort seems to have gone into hiding their presence there. 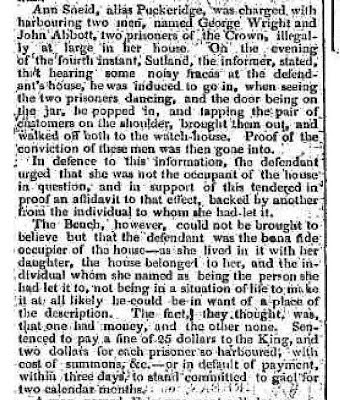 Ann Sneid, alias Puckeridge, was charged with harbouring two men, named George Wright and John Abbott, two prisoners of the Crown, illegally at large in her house.  On the evening of the fourth instant, Sutland, the informer, stated, that hearing some noisy fracas at the defendant's house, he was induced to go in, when seeing the two prisoners dancing, and the door being on the jar, he popped in, and tapping the pair of customers on the shoulder, brought them out, and walked off both to the watch-house.  Proof of the conviction of these men was then gone into.
Indefence to this information, the defendant urged that she was not the occupant of the house in question, and in support of this tendered in proof an affidavit to that effect, backed by another individual to whom she had let it.
The Bench, however, could not be brought to believe but that the defendant was the bona fide occupier of the house - as she lived in it with her daughter, the house belonged to her, and the individual whom she named as being the person she had let it to, not being in a situation in life to make it at all likely he could be in want of a place of the description.  The fact - they thought, was that one had money, and the other none.  Sentenced to pay a fine of 25 dollars to the King, and two dollars for each prisoner so harboured, with cost of summons &c. - or in default of payment, within three days to stand committed to gaol for two calendar months.