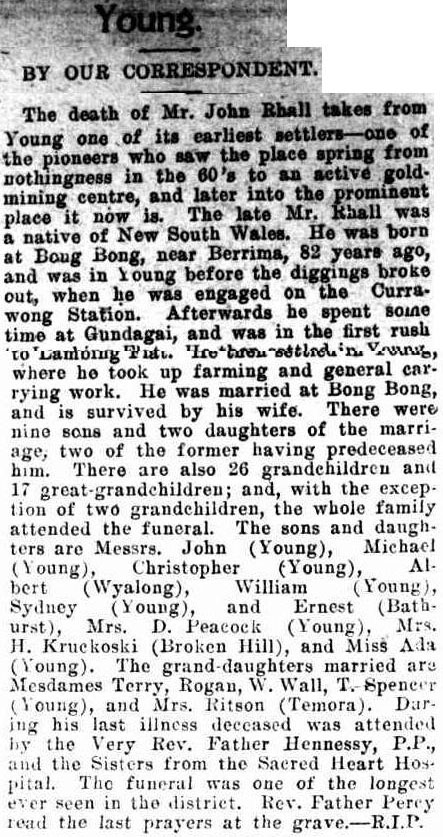 YOUNG
BY OUR CORRESPONDENT.

The death of Mr. John Rhall takes from Young one of its earliest settler- one of the pioneers who saw the place spring from nothingness in the 60's to an active gold-mining centre, and later into the prominent place it now is.  The late Mr. Rhall was a native of New South Wales.  He was born at Bong Bong, near Berrima, 82 years ago, and was in Young before the diggings broke out, when he was engaged on the Currawong Station.  Afterwards he spent some time at Gundagai, and was in the first rush to Lambing Flat.  He then settled in Young, where he took up farming and general carrying work.  He was married at Bong Bong, and is survived by his wife.  There were nine sons and two daughters of the marriage; two of the former having predeceased him.  There are also 26 grandchildren and 17 great grandchildren ; and, with the exception of two grandchildren, the whole family attended the funeral.  The sons and daughters are Messrs. John (Young), Michael (Young), Christopher (Young)m Albert (Wyalong), William (Young), Sydney (Young), and Ernest (Bathurst), Mrs. D. Peacock (Young), Mrs. H. Kruckoski (Broken Hill), and Miss Ada (Young).  The grand-daughters married are Mesdames Terry, Rogan, W. Wall, T. Spencer (Young), and Mrs. Ritson (Temora).  During his last illness deceased was attended by the Very Rev. Father Hennessy, P.P., and the Sisters from the Sacred Heart Hospital.  The funeral was one of the longest ever seen in the district.  Rev. Father Percy read the last prayers at the grave.- R.I.P.

John Rhall and his wife Mary Ann (nee Camfield) had the following children:

John Rhall, a resident of the Young district for 60 years, died on Saturday morning at the age of 84 years.

'RHALL. - At Young (N.S.W.), Mr. John
Rhall, aged eighty-two years. Deceased was
one of the earliest settlers in that district,
and saw it spring into fame as a flourishing
goldfield in the sixties, and subsequently into
a thriving agricultural and pastoral commun-
ity. Seven sons and three daughters survive
him, with twenty-six grandchildren ,and seven-
teen great-grandchildren. The whole of the
descendants, with the exception of two of the
grandchildren, were present at the funeral.'

RHALL.- In loving memory of our dear Father, John Rhall, who departed this life on the 8th August, 1914.
May he rest in peace.
-Inserted by his loving Son and Daughter-in-law, Ern and Lottie.